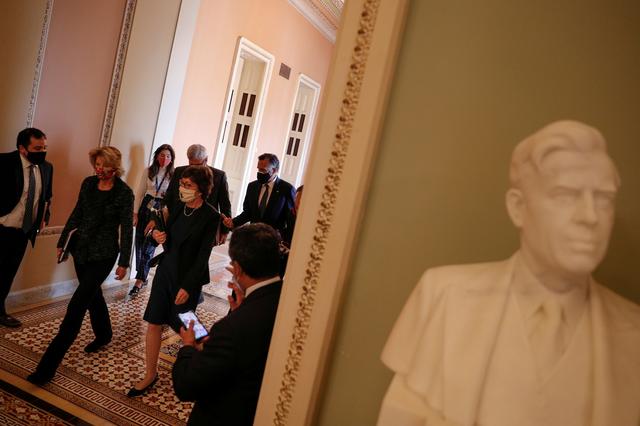 WASHINGTON, D.C. — On Sunday, a group of 10 moderate Republican U.S. senators urged Democratic President Biden to reconsider his $1.9 trillion COVID-19 relief package, saying they wanted a meeting to discuss a compromise that they said could win swift bipartisan support.

In a letter to Biden, Susan Collins (R-ME), Lisa Murkowski (R-AK), Mitt Romney (R-UT) and seven other senators said they would unveil their proposed legislation on Monday to address the coronavirus crisis.

The progress of Biden’s package to support individuals and businesses will be an early test of the new president’s promise to work across the political divide.

Some Republicans, who have lost control of the Senate, have questioned the cost, while others urged more targeted measures.

“Our proposal reflects many of your stated priorities, and with your support we believe that this plan could be approved quickly by Congress with bipartisan support,” the group wrote in the letter, whose signatories also included Sens. Bill Cassidy (R-LA), Shelley Moore Capito (R-WV), Todd Young (R-IN), Jerry Moran (R-KS) and Michael Rounds (R-SD).

Sen. Rob Portman (R-OH), who has announced he will not seek re-election in 2022, also signed the letter, which said the group wished to “work in good faith” with the new administration.

While offering few specifics, they said their plan echoed Biden’s call for more funding to boost vaccines and testing as well as support for schools and child care centers, but said their plan would include more targeted assistance for families in need and additional funds for small businesses.

They did not give an overall cost for compromised bill, but said money from previous COVID-19 relief bill passed last year remained unspent.

Brian Deese, director of the National Economic Council, told CNN’s State of the Union program that the White House had seen the letter and would review it.

Congress, controlled by Democrats, is set to move this week on Biden’s plan to deliver a fresh infusion of COVID-19 relief to Americans and businesses reeling from the pandemic, which has killed more than 430,000 people in the United States.