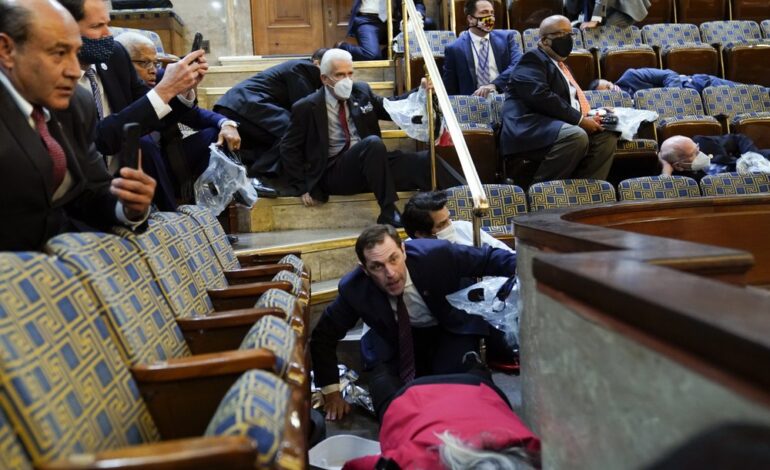 An AP file photo shows people sheltering in the House gallery as rioters try to break into the House Chamber at the U.S. Capitol. on Jan. 6.

WASHINGTON, D.C. — In a preview of what could be expected during the second impeachment trial of former President Trump, House impeachment mangers said there was “overwhelming” evidence of misconduct by Trump that led the deadly events at the U.S. Capitol on Jan. 6.

“The evidence of President Trump’s conduct is overwhelming,” the House managers wrote in a response on Monday to filings by Trump’s legal team. “He has no valid excuse or defense for his actions. And his efforts to escape accountability are entirely unavailing. As charged in the article of impeachment, President Trump violated his oath of office and betrayed the American people.

“His incitement of insurrection against the United States government — which disrupted the peaceful transfer of power — is the most grievous constitutional crime ever committed by a president.”

Trump’s team has accused Congressional Democrats of using the insurrection at the Capitol Building on Jan. 6 for “political gain.” That attack by Trump supporters during the counting of electoral votes that legitimately gave President Biden his victory left five people dead, including a Capitol Police officer.

“This was only ever a selfish attempt by Democratic leadership in the House to prey upon the feelings of horror and confusion that fell upon all Americans across the entire political spectrum upon seeing the destruction at the Capitol on January 6 by a few hundred people,” said a pretrial brief filed by Trump’s attorneys on Monday.

Trump’s legal team is also arguing that trying a president after they have left office is unconstitutional. Democrats disagree.

“Presidents swear a sacred oath that binds them from their first day in office through their very last,” said the House managers on Monday.

Trump’s legal team will also argue that that Trump did not incite the rioters by inviting them to march to the steps of the Capitol as his election defeat was being certified by the U.S. Congress.

“And if you don’t fight like hell, you’re not going to have a country anymore,” Trump had said at an earlier rally just down the road from the Capitol Building on Jan. 6.

“Of the over 10,000 words spoken, Mr. Trump used the word ‘fight’ a little more than a handful of times and each time in the figurative sense that has long been accepted in public discourse when urging people to stand and use their voices to be heard on matters important to them; it was not and could not be construed to encourage acts of violence,” Trump’s lawyers wrote in a 75-page legal brief submitted on Monday.

Trump’s team also argues that his comments spreading false and debunked conspiracies about widespread election fraud were protected by the First Amendment. Democrats have pushed back on that point.

“President Trump’s repeated claims about a ‘rigged’ and ‘stolen’ election were false, no matter how many contortions his lawyers undertake to avoid saying so,” Democrats wrote. President Trump disembarks from Air Force One at Joint Base Andrews in Maryland, after visiting the U.S.-Mexico border wall in Texas, Jan. 12. Photo: Carlos Barria/Reuters

If being held accountable means being impeached by the House and being convicted by the Senate, the answer to that is no — U.S. Sen. Roger Wicker (R-MS)

At least 17 Republican Senators would have to join all 50 Democrats to convict Trump, a very high bar considering Trump’s lasting appeal with his Republican voting base.

Based on whether they will be running for reelection, just won reelection or have previously been critical of Trump, the probable Republicans who could join Democrats are Senators Mitt Romney of Utah, Ben Sasse of Nebraska, Susan Collins of Maine, Lisa Murkowski of Alaska and Pat Toomey of Pennsylvania,

Senate Minority Leader Mitch McConnel (R-KY) has said he will keep an open mind and will listen to the arguments presented. In Trump’s previous impeachment trial, over his pressure campaign on the government of Ukraine, only Romney voted to convict.

Mississippi Republican Senator Roger Wicker said that he thinks Trump should and will be acquitted.

“If being held accountable means being impeached by the House and being convicted by the Senate, the answer to that is no,” he said, echoing a belief held by many Republicans in the Senate.

Kentucky Senator Rand Paul, who is an ardent critic of the impeachment, said the fact that Chief Justice John Roberts had declined to preside over this week’s impeachment proceeding shows the trial to be a “farce.” Democratic Sen. Patrick Leahy of Vermont will preside over the trial as Senate president pro tempore.

“It is a farce, it is unconstitutional,” Paul said.“But more than anything it’s unwise and going to divide the country.”

According to NBC, Trump’s team has argued internally over whether to use the unconstitutionality argument to quickly throw out the impeachment case or to instead deploy Trump’s favored strategy to keep arguing that the election was stolen from him. At least three attorneys exited Trump’s legal team last month when he asked them to focus on his claims of widespread voter fraud as his defense in the impeachment trial.

But Trump attorneys David Schoen and Bruce Castor Jr. indicated they will be using the constitutionality argument. The trial is expected to begin Tuesday, Feb. 9, at 1 p.m. EST.