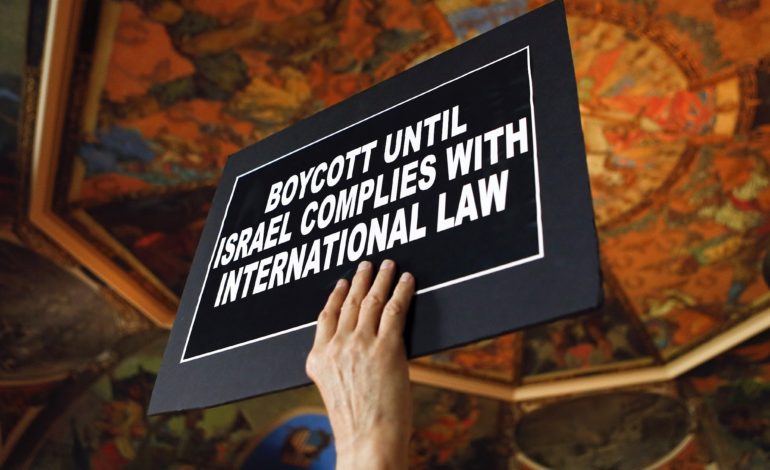 Claims made by Democratic New York City mayoral candidate Andrew Yang in a recent op-ed in the Jewish weekly, “The Forward”, point to the prevailing ignorance that continues to dominate the U.S. discourse on Palestine and Israel.

Yang, a former Democratic presidential candidate, is vying for the Jewish vote in New York City. According to the reductionist assumption that all Jews must naturally support Israel and Zionism, Yang constructed an argument that is entirely based on a tired and false mantra equating criticism of Israel with anti-Semitism.

Yang’s pro-Israel logic is not only unfounded, but confused as well. “A Yang administration will push back against the BDS movement which singles out Israel for unfair economic punishment,” he wrote, referring to the Palestinian Boycott, Divestment and Sanctions movement.

Not only does Yang fail to construct his argument in any historically defensible fashion, he  claims that BDS is “rooted in anti-Semitic thought and history.”

BDS is, in fact, rooted in history, not that of Nazi Germany, but of the Palestinian General Strike of 1936, when the Palestinian Arab population took collective action to hold colonial Britain accountable for its unfair and violent treatment of Palestinian Muslims and Christians. Instead of helping Palestine achieve full sovereignty, colonial Britain backed the political aspirations of White European Zionists who aimed to establish a “Jewish homeland” in Palestine.

Sadly, the efforts of the Palestinian natives failed, and the new State of Israel became a reality in 1948, after nearly one million Palestinian refugees were uprooted and ethnically cleansed as a result of a decidedly violent campaign, the aftershocks of which continue to this day. Indeed, today’s ongoing military occupation and apartheid are all rooted in that tragic history.

This is the reality that the boycott movement is fighting to change. No anti-Semitic, Nazi — or, according to Yang’s ahistorical account, “fascist” — love affair is at work here; just a beleaguered and oppressed nation fighting for its most basic human rights.

Yang’s ignorant and self-serving comments were duly answered most appropriately, including by many anti-Zionist Jewish intellectuals and activists throughout the U.S. and the world. Alex Kane, a writer in “Jewish Currents” tweeted that Yang made “a messed up, wrong comparison”, and that the politician “comes across as deeply ignorant about Palestine, Palestinians and BDS.”  U.S. Muslim Congresswoman Ilhan Omar and the American Arab Anti-Discrimination Committee (ADC) added their voices to numerous others, all pointing to Yang’s opportunism, lack of understanding of history and distorted logic.

But this goes beyond Yang, as the debate over BDS in the U.S. is almost entirely rooted in fallacious comparisons and ignorance of history.

The criminalization of the boycott movement has taken center stage of the federal government in Washington DC. Anti-boycott legislation was passed with overwhelming majorities in both the Senate and the House of Representatives in recent years and more are expected to follow

Those who had hoped that the unceremonious end of the Donald Trump administration would bring about a measure of justice for the Palestinian people will surely be disappointed, as the American discourse on Palestine and Israel rarely changes, regardless which president resides in the White House and what political party dominates the Congress.

So, reducing the boycott debate to Yang’s confused account of history and reality is, itself, a reductionist understanding of U.S. politics. Indeed, similar language is regularly infused, like that used by President Biden’s nominee for United Nations envoy, Linda Thomas-Greenfield, while addressing her confirmation hearing at the Senate’s Foreign Relations Committee on January 27. Like Yang, Thomas-Greenfield also found boycotting Israel an “unacceptable” act that “verges on anti-Semitism.”

While the presumptive envoy supported the return of the U.S. to the Human Rights Council, UNESCO and other U.N.-affiliated organizations, her reasoning for such a move is merely to ensure the U.S. has a place “at the table” so that Washington may monitor and discourage any criticism of Israel.

Yang, Thomas-Greenfield and others perpetuate such inaccurate comparisons with full confidence that they have strong support among the country’s ruling elites from the two dominant political parties. Indeed, according to the latest count produced by the pro-Israel Jewish Virtual Library website, “32 states have adopted laws, executive orders or resolutions that are designed to discourage boycotts against Israel.”

In fact, the criminalization of the boycott movement has taken center stage of the federal government in Washington DC. Anti-boycott legislation was passed with overwhelming majorities in both the Senate and the House of Representatives in recent years and more are expected to follow.

The popularity of such measures prompted former Secretary of State Mike Pompeo to declare the Israel boycott movement to be anti-Semitic, describing it at as “a cancer” at a press conference in November, alongside Israeli Prime Minister Benjamin Netanyahu, while in the illegal settlement of Psagot.

The boycott movement aims at holding the oppressor accountable as it places a price tag on military occupation and apartheid. Not only is the Palestinian boycott movement not racist, it is essentially a rallying cry against racism and oppression

While Pompeo’s position is unsurprising, it behooves Yang and Thomas-Greenfield, both members of minority groups that suffered immense historical racism and discrimination, to brush up on the history of popular boycott movements in their own country. The weapon of boycott was, indeed, a most effective platform to translate political dissent into tangible achievements for oppressed Black people in the U.S. during the civil rights movement in the mid-20th century. Most memorable, and consequential of these boycotts was the Montgomery Bus Boycott of 1955.

Moreover, outside the U.S., numerous volumes have been written about how the boycott of the White supremacist apartheid government in South Africa ignited a global movement which, combined with the sacrifices of Black South Africans, brought apartheid to an end in the early 1990s.

The Palestinian people do not learn history from Yang and others, but from the collective experiences of oppressed peoples and nations throughout the world. They are guided by the wisdom of Martin Luther King Jr., who once said that “We know through painful experience that freedom is never voluntarily given by the oppressor, it must be demanded by the oppressed.”

The boycott movement aims at holding the oppressor accountable as it places a price tag on military occupation and apartheid. Not only is the Palestinian boycott movement not racist, it is essentially a rallying cry against racism and oppression.