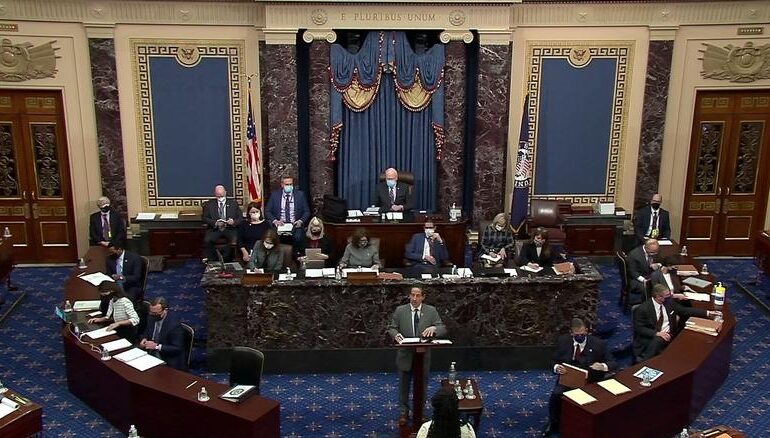 House lead impeachment manager Rep. Jamie Raskin begins the managers’ opening argument in the impeachment trial of former President Trump, on charges of inciting the deadly attack on the U.S. Capitol, on the floor of the Senate chamber on Capitol Hill in Washington, February 10. Screengrab: U.S. Senate TV

WASHINGTON, D.C. — On Thursday, Democratic impeachment managers urged Republican Senators to see the danger of a possible second election run by Donald Trump, in the historic second impeachment trial of the former president.

Through three days of the ongoing trial, Democrats have run patched-together video evidence to make the case that Trump incited the violent insurrection attempt by his supporters during the counting of electoral votes on Jan. 6 at the U.S. Capitol.

Democrats essentially argued that if Republicans failed to convict Trump on the singular charge of inciting the insurrection, “he can do this again.”

Democratic prosecutors used video captured by the rioters’ themselves as they stormed the Capitol building as evidence of Trump’s responsibility for the attack. “We were invited here,” said one. “Trump sent us,” said another. “He’ll be happy. We’re fighting for Trump.”

The former president has maintained that the 2020 election was stolen from him, a claim that has been widely debunked by officials, intelligence agencies, the Justice Department and judges, many appointed by Trump himself.

“I’m not afraid of Donald Trump running again in four years,” said U.S. Rep. Ted Lieu (D-CA) on Thursday.“I’m afraid he’s going to run again and lose, because he can do this again.”

Republicans are extremely hesitant to lay the blame on Trump for the violent day that saw five dead, including a police officer. They have instead argued that the impeachment of a former president is unconstitutional and sets a dangerous precedent, and that Trump’s rhetoric is protected by free speech statutes.

I’m not afraid of Donald Trump running again in four years. I’m afraid he’s going to run again and lose, because he can do this again — U.S. Rep. Ted Lieu (D-CA)

Democrats have pushed back against this argument.

“The First Amendment does not create some superpower immunity from impeachment for a president who attacks the Constitution in word and deed while rejecting the outcome of an election,” said U.S. Rep. Jamie Raskin (D-MD).

Only six Republicans voted to proceed with the trial. Conviction is an uphill battle for Democrats, who need at least 17 Republicans to join them in voting to convict.

Dozens of former Republican officials who said they are frustrated with their party’s unwillingness to stand up to Trump are in talks to form a center-right breakaway party, though this remains a long shot.

Republicans grew weary and seemed frustrated by the proceedings, as Democrats continued to display evidence of Trump’s rabble rousing.

“It’s just redundant, the same thing over and over again,” Senator James Inhofe (R-OK) said. “…To me, the more you hear it, the less credibility there is in it.”

Trump adviser Jason Miller said on Twitter that the defense would wrap up its case on Friday. Some Republican senators say they expected the proceedings to end on Saturday.