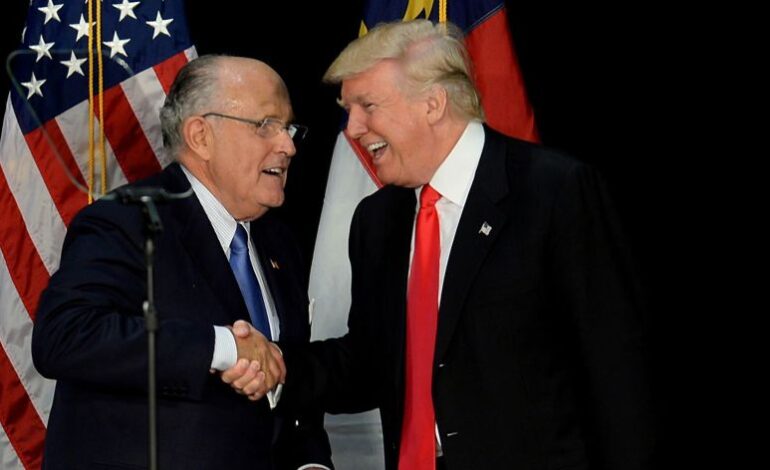 WASHINGTON, D.C. — A Democratic congressman accused former president Trump, his personal lawyer, Rudy Giuliani, and two right-wing groups of conspiring to incite the deadly riot at the U.S. Capitol in a lawsuit on Tuesday.

The civil lawsuit accuses the duo of violating the Ku Klux Klan Act, an 1871 law passed to crack down on the White supremacist organization, and is the latest legal attempt to find Trump responsible for the violence on Jan. 6, which came after he spent months falsely claiming his election defeat in November was the result of widespread fraud.

It also names as defendants the Proud Boys, a far-right organization, and the anti-government militia known as the “Oath Keepers.”

“The insurrection was the result of a carefully orchestrated plan by Trump, Giuliani and extremist groups like the Oath Keepers and Proud Boys, all of whom shared a common goal of employing intimidation, harassment and threats to stop the certification of the Electoral College,” according to a press release announcing the lawsuit.

On Saturday, the U.S. Senate acquitted Trump of inciting the Jan. 6 riot, when 57 senators —including seven Republicans — voted to convict, short of the 67 votes needed.

Although most Republicans voted against convicting Trump, Senate Minority Leader Mitch McConnell nonetheless made it clear he still felt Trump was responsible, saying, “There is no question that President Trump is practically and morally responsible for provoking the events of that day.”

Representative Bennie Thompson, a Democrat who chairs the House of Representatives Homeland Security Committee, is the named plaintiff on the suit in U.S. District Court in Washington.

The National Association for the Advancement of Colored People and attorneys from the law firm Cohen Milstein Sellers & Toll PLLC are handling the litigation.

Other members of Congress, including Democratic Representatives Hank Johnson and Bonnie Watson Coleman, are expected to join the lawsuit.

Jason Miller, an adviser to Trump, dismissed the allegations in the lawsuit, citing Trump’s acquittal in the Senate.

“President Trump did not plan, produce or organize the Jan. 6 rally on the Ellipse,” Miller said in a statement, referring to a speech the Republican former president made on Jan. 6 at a rally near the White House.

Critics have said that Trump and Giuliani helped incite the attack during the “Save America” rally, where both repeated false claims that the election had been stolen.

Giuliani told the crowd, “let’s have trial by combat… I’ll be darned if they’re going to take our free and fair vote.”

Trump, who then took the stage, urged people to march to the Capitol. More than 200 people have been charged with federal offenses in the assault on Congress, which left five dead.

The FBI and federal prosecutors have been increasingly focusing on whether members of far-right extremist groups conspired to impede Congress from certifying President Biden’s election victory.

More than 18 people associated with the Proud Boys have been charged so far for their alleged role during the riots.

Several of the alleged Proud Boy associates have been accused of conspiring to impede Congress or block police from protecting the Capitol.

Three alleged associates of the Oath Keepers have also been indicted on charges they conspired to storm the U.S. Capitol as far back as November. One of them — Thomas Caldwell — pleaded not guilty last week.

Reuters previously reported that the U.S. Justice Department is also considering whether to charge members of the groups under the federal Racketeer Influenced and Corrupt Organizations Act, known as RICO, normally used against organized crime, though a decision on that has not been made.