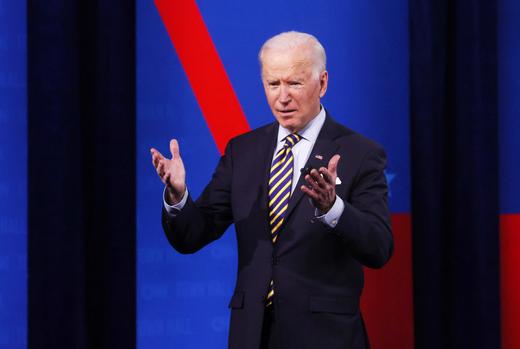 WASHINGTON, D.C. — After promising sweeping reforms to the country’s immigration system, the Biden administration announced a proposed immigration bill on Thursday that would give an eight-year path to citizenship for millions of migrants in the U.S. and fast track citizenship for undocumented individuals who came to the U.S. as children.

The bill will have to go through negotiations in the U.S. Congress, where Republicans’ opposition will mean an uphill battle for its passage. Democrats do not hold the 60-vote majority needed to pass the bill.

A reconciliation process that circumvents a super majority vote in the Senate could be applied to the bill, but an administration official told CNN that it is too early to say that it would. The Senate Democrats are working to pass Biden’s coronavirus relief bill through reconciliation.

The Biden plan will cut the time for undocumented people to gain citizenship from 13 years to eight years, with a five-year temporary status and another three years till citizenship.

An exception will be made for undocumented immigrants who came to the U.S. as children, have Temporary Protected Status or are farmworkers. After meeting some requirements and going through background checks, those individuals can directly apply for a green card.

To be eligible for the bill’s legalization plan, immigrants must have been in the country before January 1, 2021.

The plan would reduce the cap on granted asylum applications by excluding certain categories, like spouses, partners and children under the age of 21 of lawful permanent residents, from counting towards the annual cap.

The plan would fund the U.S. Citizenship and Immigration Services (USCIS) to clear up backlogs of asylum cases. It would increase the amount of available “diversity-visas” given to individuals from a random selection in select countries to promote immigration from places that don’t otherwise send many immigrants to the country.

The bill would increase funding for legal representation and immigration judges and eliminate the one-year limit for filing an asylum case. It would also repeal the restriction on reentering the U.S. of a person who had previously been illegally residing in the country.

The bill would also remove the word “alien” from U.S. immigration laws, replacing it with the term “noncitizen.” The change is “to better reflect the president’s values on immigration,” an administration official told CNN. Reports say that USCIS officials have already begun discouraging operatives from using the word “alien” to describe non-citizen Americans. Some officials have pointed to the term’s usage in the country’s laws to defend their usage of the word.