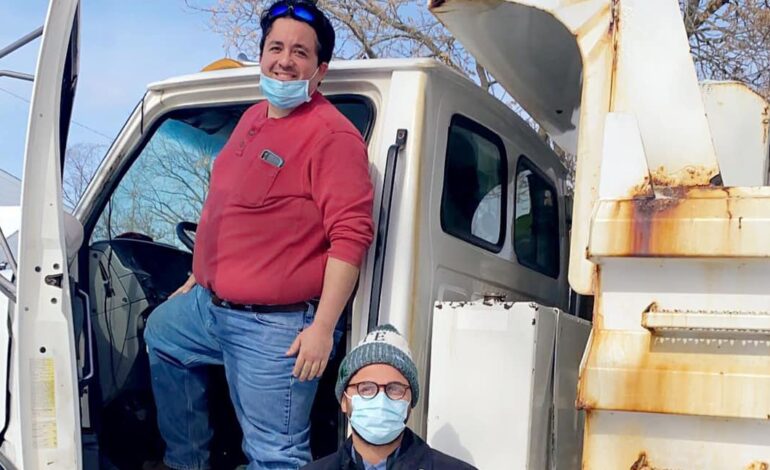 DEARBORN HEIGHTS — With the first big snowfall of the season causing a snow emergency this week, one City Councilman was ready to go along for the ride.

Recently appointed Councilman Mo Baydoun had recently spoken with Department of Public Works Director John Selmi and had mentioned wanting to go on a ride-along for the next snow day, not realizing it was going to be the very next day.

On Tuesday, Baydoun joined DPW workers for nearly three hours, getting to know the employees while also watching the plows in action.

“I had a resident who has been asking about streets being cleaned and that’s why I had reached out to John Selmi to try to figure out solutions,” he said. “DPW is doing a great job, but it’s hard to keep these guys because they’re underpaid. I want to find a way to get these guys more money. They need help. They worked tirelessly and they did a great job.”

On Sunday, Baydoun posted on social media advising residents to prepare for snow and when some residents reached out regarding their snow, Baydoun stepped up.

Mayor Bill Bazzi also showed his appreciation for the Department of Public Works.

“I am grateful for the leadership of John Selmi and the amazing DPW team,” he told The Arab American News. “During the treacherous snowstorm, the excellent service that they provided was felt throughout every end of our city. Not only did DPW make our roads safer for the residents by working 16 hours beginning at 3 a.m., they were also out in the frigid cold for hours fixing multiple water main breaks. This is the type of quality service that our residents deserve.”

DPW is doing a great job. They worked tirelessly and they did a great job — Councilman Mo Baydoun

Baydoun said that he enjoyed the experience so much, he wants to do more.

“I’ve already received calls from other departments about possible ride-alongs,” he said. “I want to help showcase other day-to-day operations. I want to do what’s best for residents, but we also have to figure out what’s best for employees to help them work efficiently and effectively. Those trucks I was in were 18- and 22-years-old. Whatever I can do to make things easier, why not do it?”

Baydoun said his driving force is making his parents proud.

“My father has been in public service for 35 years,” he said. “He was the first person I called when I was appointed to Council and he told me, ‘Do what’s best for the residents, always.’ I know that this community has my back and they know that I have theirs.”