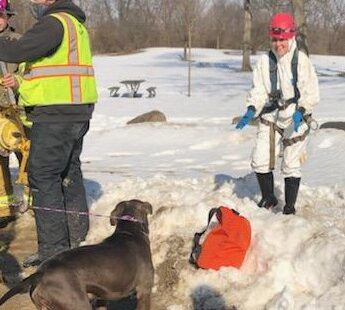 Sommer Guy, the sewer worker who volunteered to save the dog who fell into an open sewer, is reunited with the pup on land. Photo: Jack McIntyre

DEARBORN HEIGHTS — While it may sometimes seem like a dog-eat-dog world, Dearborn Heights came together to help one underdog who found himself in a troubling situation.

On Feb. 24, the Dearborn Heights Fire Department and Animal Control received a call for help in Helm Haven in Hines Park. According to Fire Chief Dave Brogan, a crew had been working on the sewers when a dog fell in.

“The crew was working on inspecting the sewers and had the manhole cover off,” he said. “It wasn’t left unattended or anything, they were still right there, but a man was walking his dog and the dog maybe got excited and got off his leash and ran right towards the crew.”

Despite the crew’s efforts to grab and stop the dog, he fell into the open sewer approximately 15 feet down into water.

“We have to be very careful when it comes to confined spaces,” Brogan said. “Animal Control was ready to dive in, but we have to send in certified confined spaces specialists for these types of things. And while we do have some in the departments, one of the people working on the sewers volunteered to go in to save the dog.”

Sommer Guy was the woman who used her confined spaces certification to help the dog.

“The sewer inspectors had made a tripod and we made a harness for her and for the dog and we lowered her down,” Brogan said. “She didn’t have to do that. That was in no way shape or form her responsibility, but she volunteered without hesitation. Our guys were pleased and impressed with her dedication, but she and her partner and team were the real superstars.”

This is a good reminder to not let your animals off their leash, especially when walking them in your neighborhood or even open areas like park settings — Animal Control and Ordinance Director Jack McIntyre

Animal Control and Ordinance Director Jack McIntyre said that his team, fire, police and Wayne County Sheriff were on scene.

“We were called out by our dispatch to respond to the dog that had fallen into a sanitary sewer drain while walking with his owner,” he said. “The fire department was able to lower a person down to attach a harness to the dog and then they both were lifted out. The owner was anxiously waiting and was thrilled with the dog’s rescue and the dog was equally happy.”

Mayor Bill Bazzi said he is proud of the community for coming together.

“I commend the swift actions of our fire department, animal control and the sewer employees,” he said. “They worked diligently to save the dog’s life.”

Brogan said that while situations like this are rare, it’s important that pet owners let the correct people do the rescuing.

“Over half of the people that die in confined space situations are the would-be rescuers,” he said. “If it were my dog, I would jump right in there too, but we have to make sure that the rescue happens safely for everyone and every animal involved. It’s important to always make sure you have control of your animal and they are on a good, strong leash. A lot of people think their dogs will always listen, but that’s not always the case, especially when they’re excited.”

McIntyre also said it’s important to remember that it’s in the city’s ordinance to keep your dogs on strong leashes. “This is a good reminder to not let your animals off their leash,” he said. “Especially when walking them in your neighborhood or even open areas like park settings.”

Brogan said that the dog was just happy to see Sommer when she got down to him.

“He wasn’t aggressive or upset, he was just a happy, excited dog the whole time,” he said. “We were all very glad that he was OK and was just happy and excited to see all these people. It was emotional, of course; the owner was so relieved to have his dog back.”

The dog was described as a 65 pound Rottweiler-shepherd mixed breed and appeared to be unharmed from the events.