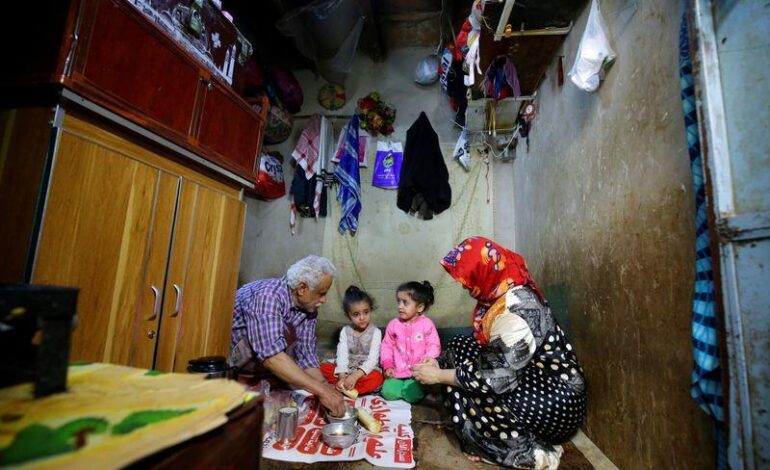 Ahmad Farea and his family sit for a meal at their house in Sanaa, Yemen, Feb. 25. Photo: Nusaibah Almuaalemi/Reuters

SANAA — Unable to find work, Ahmed Farea has sold everything, including his wife’s gold, to feed and house two young daughters in one small room.

Elsewhere in Yemen’s capital Sanaa, widow Mona Muhammad has work, but struggles to buy anything more nutritious than rice for her four children amid high prices.

And in a nearby hospital, severely malnourished children receive lifesaving nutritional drinks.

Across the country Yemenis are exhausting their coping mechanisms, and children are starving, amid the world’s largest humanitarian crisis.

On Monday the United Nations said it hopes to raise $3.85 billion at a virtual pledging event to avert what the U.N. aid chief has said would be a large-scale “man-made” famine, the worst the world will have seen for decades.

“I want the war to stop so we can go back to how we were … We could buy what we wanted and could feed our children,” Muhammad said.

Yemen was a poor country with a child malnutrition problem even before the six-year war disrupted imports, inflated the currency, displaced people, collapsed government services and destroyed incomes. Then COVID-19 hammered remittances from abroad that many families relied on.

“Since the war and the blockade started, and work stopped, I can’t buy anything anymore. Where am I supposed to get it from?” said Farea, who wheels his barrow daily to collect water in cans from a neighborhood tank provided for poor people.

“I sleep all morning and then have lunch at noon from whatever God supplies and that covers the rest of the day.”

His work in construction declined in the wake of the political upheaval caused by Yemen’s 2011 uprising, he said. He then sold fruit, but rising prices after war broke out in late 2014 made this unprofitable.

As needs have risen in the past year, funding of the aid response has dropped, leading the U.N. and other aid agencies to scale down or close various assistance programs.

Famine has never been officially declared in Yemen, but pockets of famine-like conditions have appeared for the first time in two years, the U.N. has said.

“What is happening to the people of Yemen is unimaginably cruel. Aid groups are catastrophically underfunded and overstretched. The parties to this senseless war specialize in producing suffering and the weapon of choice is hunger,” said Jan Egeland, secretary general of the Norwegian Refugee Council, on a visit to Yemen.

There has been a recent renewed push by the U.N. and the U.S. for a negotiated end to the war, widely seen as a proxy conflict between Saudi Arabia and Iran. President Biden has said Yemen is a priority, declaring a halt to U.S. support for the Saudi-led military campaign.