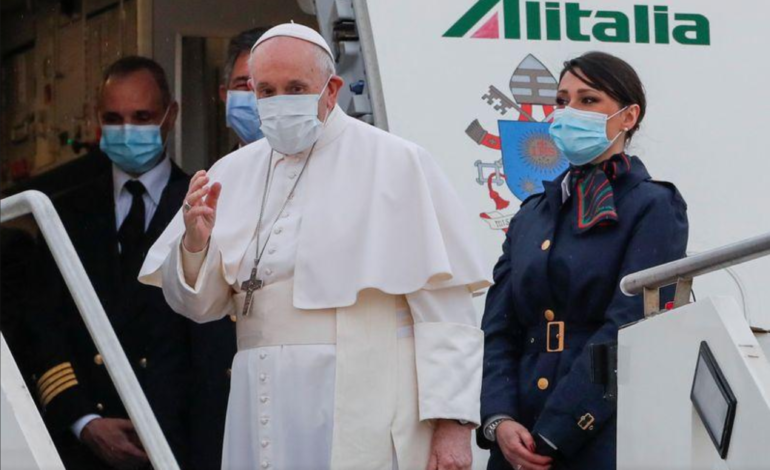 Pope Francis waves as he boards the plane for his visit to Iraq, at Leonardo da Vinci-Fiumicino Airport in Rome, Italy, March 5. Photo: Reuters

ROME – Pope Francis left Rome on Friday to start a four-day trip to Iraq, his most risky foreign trip since his election in 2012 and the first visit by a pontiff to the country.

An Alitalia airplane carrying the 84-year-old pope, his entourage, a security detail and about 75 journalists left Rome’s Leonardo da Vinci airport for the 4-1/2-hour flight to the Iraqi capital, Baghdad.

Iraq is deploying thousands of additional security personnel to protect Francis during the visit, which comes after a spate of rocket and suicide bomb attacks raised fears for his safety.

The flags of Iraq and the Vatican City fluttered outside Baghdad airport in anticipation of his arrival.

Francis’ whirlwind tour will cover four cities in the north and south of the country, taking him by plane, helicopter and possibly armored car to areas that most foreign dignitaries are unable to reach, let alone in such a short space of time.

He will say Mass at a Baghdad church, meet Iraq’s top Shi’a Muslim cleric in the southern city of Najaf and travel north to Mosul, where the army had to empty the streets for security reasons last year for a visit by Iraq’s prime minister.

Mosul is a former ISIS stronghold, and churches and other buildings there still bear the strains of conflict.

Since the defeat of the ISIS militants in 2017, Iraq has seen a greater degree of security, though violence persists — often in the form of rocket attacks by Iran-aligned militias on U.S. targets and U.S. military action in response.

On Wednesday morning, 10 rockets landed on an airbase that hosts U.S., coalition and Iraqi forces. Hours after that attack, the pope reaffirmed he would be going to Iraq.

ISIS also remains a threat. In January, a suicide attack claimed by the Sunni militant group killed 32 people in Baghdad’s deadliest such attack in years.

Francis will meet clergy at a Baghdad church where Islamist gunmen killed more than 50 worshipers in 2010. Violence against minority groups in Iraq, especially when a third of the country was being run by ISIS, has reduced its ancient Christian community to a fifth of its once 1.5 million people.

The pontiff will also visit Ur, birthplace of the prophet Abraham, who is revered by Christians, Muslims and Jews, and meet Iraq’s revered top Shi’a Muslim cleric, 90-year-old Grand Ayatollah Ali al-Sistani.

The meeting with Sistani, who wields great influence over Iraqi politics and its Shi’a majority, will be the first by a pope.

Some Shi’a militant groups have opposed the pope’s visit, framing it as Western interference in Iraq’s affairs. But many Iraqis hope that it can help foster a fresh view of Iraq.

“It might not change much on the ground, but at least if the pope visits, people will see our country in a different light, not just bombs and war,” said Ali Hassan, a 30-year-old Baghdad resident picking up relatives at the airport.

The trip is the pope’s 33rd outside Italy. He is due to return to Rome on Monday morning.