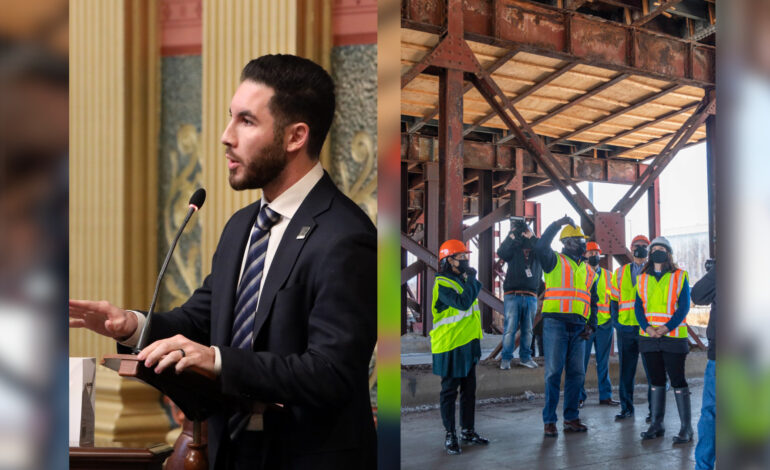 Governor Whitmer visited the Miller-Rotunda Bridge in Dearborn on Wednesday, March 3, to make the case for $300 million in repair money for aging bridges in her 2022 budget proposal. Photo: Office of the Governor

DEARBORN — Governor Whitmer made an appearance Wednesday at the Miller-Rotunda Bridge in Dearborn with county and city officials.

The visit to the aging bridge highlights the governor’s long-standing promise to inject repair funds into the state’s crumbling roadways and infrastructure.

Whitmer discussed her “Bridge Bundling” proposal, which would allow MDOT to administer $300 million to fix 120 local bridges in serious or critical condition, including the Miller-Rotunda Bridge. The Miller-Rotunda Bridge consists of two separate bridges that were both built in 1931. They were last rehabilitated in 1983 and have an overall rating of critical condition. There have been smaller stopgap repairs made to the bridge in the last few years.

But negotiating a budget appropriation for such massive projects, with a GOP-controlled legislature and during a resources-starving pandemic, means an uphill climb.

State Rep. Abdullah Hammoud (D-Dearborn) commended the efforts of officials like Wayne County Executive Warren C. Evans and Commissioner Sam Baydoun, who joined Whitmer on Wednesday, for being fierce advocates for the project.

He also told The Arab American News that finalizing Whitmer’s budget, which includes funding for infrastructure, is some ways away from being secure. Hammoud had actually managed to secure funds for the bridge in the House budget two years ago, but Whitmer vetoed that budget after it passed both chambers, following political differences between herself and Republicans.

“Unfortunately, (that funding) got caught in the politics,” Hammoud said. “This time around, the governor put it in her executive recommendation, which means now securing that funding is on her end. Now we have to sustain it in the House and Senate.”

Hammoud has requested a hearing with the Transportation Budget Committee on the $300 million funding to repair 120 local bridges in Whitmer’s proposed 2022 budget, to make the case for the critical funding. He has had conversations with his Republican colleagues, but there is no word yet whether the funding will make its way through the appropriations process.

Hammoud projects the budget won’t be finalized till  June or July, at best. The pandemic could delay it into the fall, like last year. Hammoud also said he knows the importance of long-term projects like bridges, which depreciate slower and make investment worthwhile, to communities like Dearborn.

“If the Miller-Rotunda Bridge were to close down, you’ve land-locked a great industrial center and a whole residential neighborhood,” Hammoud said. “The bridge is being upheld by minor fixes. We know the bridge is currently in a dangerous state.”

Hammoud was in Lansing at the time of Whitmer’s visit. Dearborn Mayor Jack O’Reilly, Jr. and Dearborn City Council President Susan Dabaja joined Whitmer and other officials at the site on Wednesday.