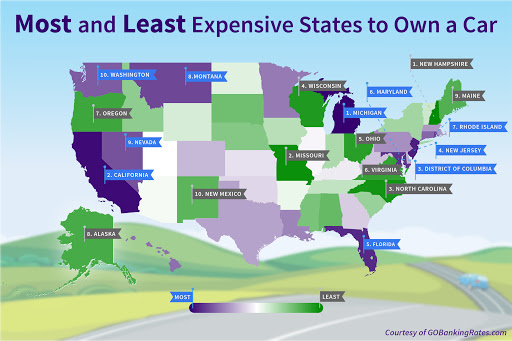 Study finds the most and least expensive states to own a car.

A new study reveals that Michigan is the most expensive state in which to own a car. Michigan residents pay $9,304 annually. They spend $2.37 per gallon of gas, drive an average of 14,121 miles a year, spend $5,740 for insurance coverage and $2,005 on car payments and maintenance.

You can find the complete state-by-state report here: https://www.move.org/average-cost-owning-a-car/

According to the study conducted by Move.org, it costs roughly $5,264.58 every year to own a car in the United States. This includes the average costs for car payments, gas, car insurance and replacement parts across every state in the country — some of which have much higher costs than others.

For example, the average Michigan resident pays $9,304.28 every year for their car, while the average Alaskan only pays $3,586.95. This is a difference of nearly $6,000, so if you’re thinking of moving to a new state and you want to know how much it costs to own a car there, you should look into that state’s unique costs instead of planning to pay the national average.

States with the highest annual costs for owning a car

A car is basically a must-have for any American adult. This is partly because many American cities were designed or updated with cars in mind. Additionally, public transportation in U.S. cities is far less developed and accessible than cities in other countries with comparable wealth, geography and population density.

So, if you live in the U.S. and want to travel to work, get out of the house for recreation or go grocery shopping, you probably need a car.

Unfortunately, owning a car can cost quite a bit, especially in these states.

States where it costs the most to own a car States where it costs the most to own a car

Owning a car isn’t cheap no matter where you live. Even the cheapest used car you can find will need insurance, fuel and routine maintenance. That said, there are some states where it costs less than $5,000 on average to own a car and keep it running for a year.

Here are the states where car ownership costs the least.

States where it costs the least to own a car States where it costs the least to own a car

Michigan residents pay the most for car insurance

On average, Americans pay $882 annually for the minimum state-required car insurance. Compared to this, Michigan’s minimum insurance cost of $5,740 seems incredibly expensive. In fact, this high insurance price is what puts Michigan in the number one spot on the Move.org list of states where residents pay the most for their cars. The monthly average cost of owning a car in the U.S. – Data is courtesy of Move.org