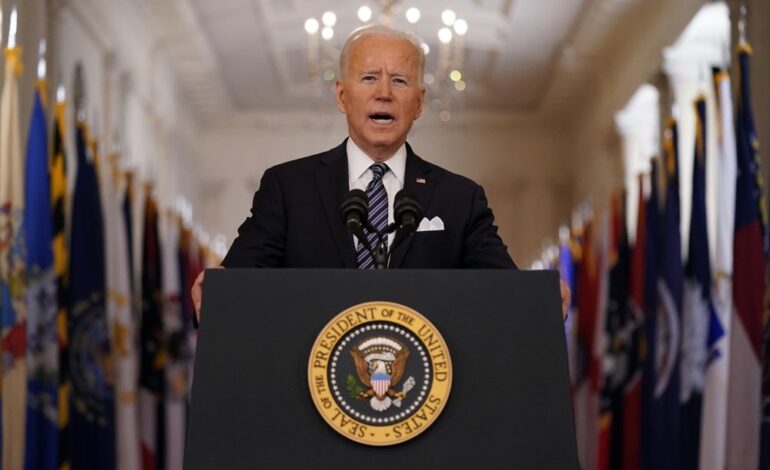 President Biden speaks about the COVID-19 pandemic during a prime-time address from the East Room of the White House, Thursday, March 11, in Washington, D.C.. Photo: Andrew Harnik/AP

WASHINGTON, D.C. — In his first prime-time address to the American public, President Biden announced on Thursday that he is directing states to make all adults vaccine-eligible by May 1.

As vaccine supplies continue to increase, Biden is now confident the enormous goal to vaccinate much of America is possible. The U.S. is expecting delivery of enough doses for those 255 million adults by the end of that month, but the process of actually administering those doses will take time, the AP reported.

Biden said his administration is launching a nationwide website to help people find doses and ensure there would be “no more searching day and night for an appointment” to get a shot.

Other measures to boost vaccine delivery are the federal government deploying an additional 4,000 active-duty troops to support vaccination efforts and allowing more healthcare professionals, such as medical students, veterinarians and dentists, to deliver shots.

Biden is also directing more doses toward some 950 community health centers and up to 20,000 retail pharmacies, to make it easier for people to get vaccinated closer to their homes.

Biden said he wants Americans to gather at least in small groups for the Fourth of July and “make this Independence Day truly special.”

During the address, Biden was marking one year since the onset of the pandemic that has killed more than 530,000 Americans and plunged the country into an economic and health crisis.

“While it was different for everyone, we all lost something,” Biden said, calling the past year “a collective suffering, a collective sacrifice.”

Though delivering some hope, Biden urged Americans to remain vigilant and cautious as the slow work of getting all adults in the U.S. vaccinated continues.

Biden made clear that his July 4 gatherings goal applied only to smaller gatherings, not larger ones. He said the government required cooperation from Americans to continue to wear face coverings, maintain social distancing and follow federal guidelines meant to slow the spread of the virus, and win the battle against more infections variants. He also urged Americans to get a shot of any of the three available safe and effective vaccines as soon as possible.

“I need you, the American people,” Biden said. “I need you. I need every American to do their part.”

Almost exactly one year ago, former President Trump addressed the nation to mark the WHO’s declaration of a global pandemic. He announced travel restrictions and called for Americans to practice good hygiene, but displayed little alarm about the forthcoming catastrophe. It was later revealed that Trump acknowledged he had been deliberately “playing down” the threat of the virus.