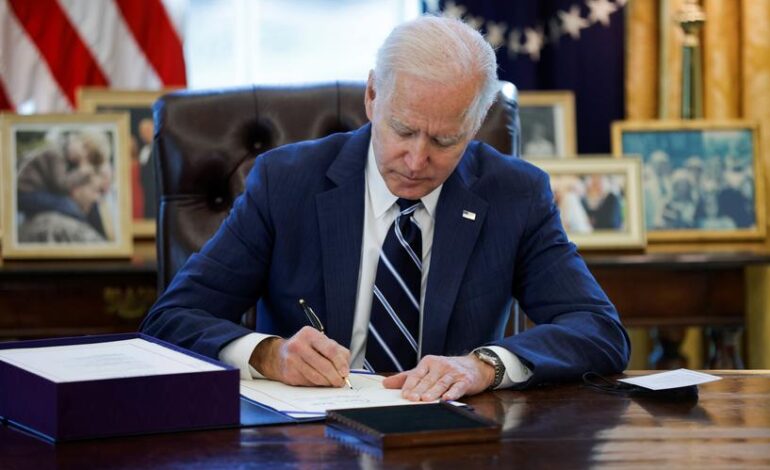 The signing on Thursday means some Americans could expect their $1,400 stimulus payments to begin arriving in their bank accounts this weekend, as earlier noted by White House Press Secretary Jen Psaki. This would be the first wave of payments, with more check payments being sent over the following weeks.

Psaki recently said that the IRS is “building on lessons learned from previous rounds to increase the number of households that will get electronic payments, which are substantially faster than checks.”

While signing the bill in the Oval Office, Biden said, “This historic legislation is about rebuilding the backbone of this country.”

Biden addressed the nation later on Thursday, speaking to a country reeling from a devastating pandemic, with the U.S. having lost nearly 529,000 since the COVID-19 virus plunged the country into an economic and health crisis a year ago.

Biden had originally planned to sign the bill on Friday, but it arrived at the White House more quickly than anticipated.

In a near party line 220-211 vote, the U.S. House of Representatives gave final approval for the relief package on Wednesday, without any Republican support.

The passage of the historic aid package, dubbed the American Rescue Plan, came seven weeks after Biden entered the White House and four days after the Senate passed the bill without a single Republican vote.

The new law will provide up to $1,400 direct payments to 90 percent of U.S. households. This version, approved earlier in the U.S. Senate, caps those checks at those individuals earning below $80,000. It also extends $300 per week emergency unemployment benefits into early September.

It also includes $350 billion in aid to state and local governments, $150 billion to schools across the country, provides direct housing assistance, nutrition assistance for 40 million Americans, expands access to safe and reliable childcare and affordable health care and more.

The package includes expanded tax credits over the next year for children, child care and family leave — some of them credits that Democrats have signaled they’d like to make permanent — plus spending for renters, feeding programs and people’s utility bills.

It also has hundreds of billions for COVID-19 vaccines and treatments, schools, state and local governments and ailing industries, from airlines to concert halls. There is aid for farmers of color, pension systems and student borrowers, and subsidies for consumers buying health insurance and states expanding Medicaid coverage for lower earners. If you’re a member of the swamp, you do pretty well under this bill. But for the American people, it means serious problems immediately on the horizon — House Minority Leader Kevin McCarthy (R-CA)

The expanded Child Tax Credit will support 27 million children. More than 17 million low-wage workers will get some help through an improved Earned Income Tax Credit.

Republicans complained that though they overwhelmingly supported five previous relief bills Congress approved since the pandemic struck a year ago, this one solely reflected Democratic goals by setting aside money for family planning programs and federal workers who take leave to cope with COVID-19 and failing to require that shuttered schools accepting aid reopen their doors.

“If you’re a member of the swamp, you do pretty well under this bill. But for the American people, it means serious problems immediately on the horizon,” said House Minority Leader Kevin McCarthy (R-CA), referring to the added federal borrowing the measure will force.

The House, which passed an earlier version of the legislation, needed to meet again to approve changes made in the Senate over the weekend.

Let me be clear, while this bill has many provisions that will help families across the United States, I am disappointed that the Senate sent us back a bill without a $15 minimum wage increase — U.S. Rep. Rashida Tlaib (D-Detroit)

U.S. Rep. Rashida Tlaib (D-Detroit) said the package provided a critical lifeline for many struggling Americans, but more needed to be done, bemoaning in particular the upper chamber’s refusal to raise the national minimum wage to $15 an hour.

“Let me be clear, while this bill has many provisions that will help families across the United States, I am disappointed that the Senate sent us back a bill without a $15 minimum wage increase,” Tlaib said. “My residents sent a clear message with the election of President Biden and Vice President Harris that they wanted bold action on the issues they are facing. They do not want that progress to be hindered by a handful of senators and an unelected parliamentarian. Moving forward, our residents cannot afford for Democrats to negotiate against themselves. We were sent here to work on behalf of and for the people – they deserve us doing everything we can to deliver for them.”

U.S. Sen. Gary Peters (D-MI) released a statement after the final House passage of the bill on Wednesday.

“A year into this pandemic, it’s clear that Michiganders and Americans still need additional support to put food on the table, pay their bills and make ends meet,” Peters said. “I have heard gut-wrenching personal stories from countless Michiganders – who are trying to keep their heads above water and get through this public health and economic crisis. The American Rescue Plan will deliver much-needed relief, and I’m glad this bill is now going to be signed into law.”

This bill will send the state billions to help build our economy back better from the pandemic and boost our rollout of the three safe, effective vaccines — Governor Whitmer

U.S. Rep. Debbie Dingell (D-Dearborn) also praised the passage of the final bill in the House.

“We have been through immense tragedy and trauma, but this historic legislation will help us rebuild and repair with investments in our neighborhoods, businesses, schools, and families,” Dingell said. “It will lift millions of workers and children out of poverty and provide them with economic dignity and security. And it will help us get shots in arms, students in school and money in the pockets of our workers.”

Governor Whitmer said the bill’s passage is a historic achievement on par with President Roosevelt’s New Deal and President Johnson’s Great Society in terms of how many Americans it will immediately and directly benefit.

“This bill will send the state billions to help build our economy back better from the pandemic and boost our rollout of the three safe, effective vaccines,” Whitmer said. “I look forward to working across the aisle with the legislature to put these dollars to work quickly to support our working families, our kids and our small businesses.”