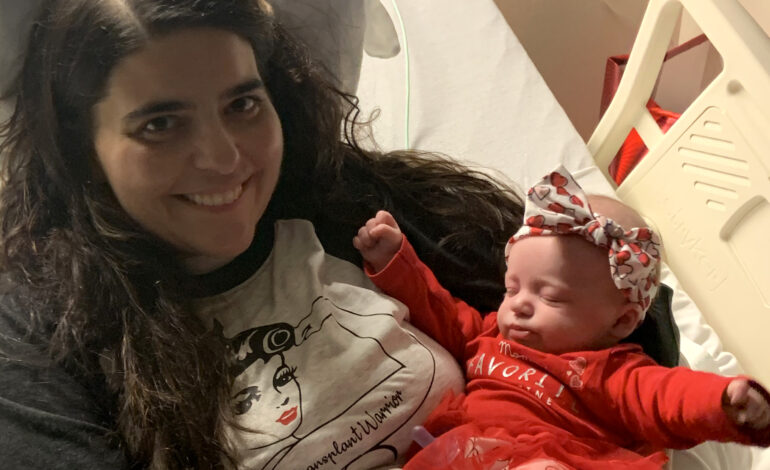 31-year-old Jackie Dennis successfully received a double-lung transplant due to complications from COVID-19, which she contracted while pregnant with her first child, Mia Rose. Photo courtesy: The Dennis Family

DETROIT — A Wyandotte woman whose lungs were irreparably damaged by COVID-19 and had two months earlier given birth for the first time received what is believed to be Michigan’s first double-lung transplant linked to the virus.

Dennis underwent the transplant at Henry Ford Hospital in Detroit on January 16, seven weeks after the birth of her daughter, Mia Rose. After one week in inpatient rehab, she returned home on Feb. 19, meaning a total 91-day hospital stay between two hospitals in the Henry Ford Health System.

Dennis said she is fortunate to be alive and thankful for the care she received at Henry Ford.

“No one expected me to leave the hospital so fast, but I had an amazing team of doctors and nurses,” Dennis said. “After being away so long, I just wanted to get home and be with my family. I missed my husband and baby so much.”

Ricky Dennis, who along with other family members has been taking care of the couple’s 16-week-old daughter, said he endured some scary and difficult days watching his wife’s health deteriorate.

“It has been a crazy whirlwind,” he said, adding that not being able to visit his wife because of hospital visitor restrictions made it even tougher. Jackie Dennis and her husband, Ricky, during a rehab appointment. Dennis is in rapid recovery from the double lung transplant she received after severe COVID-19 related lung damage and giving birth to a baby girl. Photo: Riva Sayegh-McCullen

After being away so long, I just wanted to get home and be with my family. I missed my husband and baby so much — Jackie Dennis

Dennis was 35 weeks pregnant and had not been feeling well, which led her husband to drive her to the Emergency Department at Henry Ford Wyandotte Hospital on Nov. 20. She reported a cough, headache and was having trouble breathing. Dennis had also been suffering from preeclampsia, a pregnancy complication characterized by high blood pressure that can cause swelling and in some cases affect breathing.

During the medical evaluation, Dennis received a COVID-19 nasal swab and the test came back positive.

She was promptly admitted and one week later, doctors induced her labor at 36 weeks. Mia Rose was born healthy on Nov. 27, one month before the baby’s expected due date.

Shortly after giving birth, Dennis developed pneumonia and her lung function worsened to the point where she was placed on a ventilator. In many patients with COVID-19, the infection can progress to severe respiratory failure and acute respiratory distress syndrome requiring mechanical ventilation, the hospital said.

On December 10, Dennis was transferred to the intensive care unit at Henry Ford Hospital, a Level 1 trauma center known for its expertise in critical care medicine. She was later moved to the cardiovascular ICU and placed on a specialized breathing machine called ECMO.

Henry Ford Hospital is among only a handful of hospitals specially trained and equipped to use this unique type of life support, which pumps blood from a patient’s body to an oxygenator— an artificial lung located outside the body.

It adds oxygen to the blood and removes carbon dioxide, replacing the function of the person’s own lungs. ECMO is used in critical care situations when a patient is extremely ill and their lungs or heart needs help. Some lung conditions that ECMO may be used for include care for COVID-19, acute respiratory distress syndrome and other infections. It can be an option when other life support measures have not worked.

“When things were not looking hopeful, the courage and persistence of the team to go aggressively with ECMO was important in the transition for her to be able to receive a transplant,” said Dr. Hassan Nemeh, surgical director of thoracic organ transplant at Henry Ford.

Dr. Hassan Nemeh described the removed lungs as the “worst he’s ever seen”, underscoring the ferocity of the damaged caused by the coronavirus

After attempts to wean Dennis off ECMO were unsuccessful and with no signs her lungs would recover, doctors listed her name on the national organ transplant waiting list in a final attempt to save her life.

Nemeh described the removed lungs as the “worst he’s ever seen”, underscoring the ferocity of the damage caused by the coronavirus.

“I really anticipated that Jackie was someone who probably would have been in the hospital for many months as part of her recovery, given how sick she was going into the transplant,” said Dr. Lisa Allenspach, medical director of Henry Ford’s Lung Transplant Program. “She has really amazed us all.” Henry Ford Health System Patient Jackie Dennis during a rehab appointment, in rapid recovery from a double lung transplant after a COVID-19 diagnosis and giving birth to a baby girl. Photo: Riva Sayegh-McCullen

Dennis, who coaches the cheer team at Huron High School, said she constantly reminded herself of the theme the team chose for the school year during her time in the hospital. It was “Bring Back the Fight.”

Dennis’ fighting spirit through weeks of adversity made quite the impression on her medical team.

“We have all marveled at just how amazing and inspirational her progress has been,” Allenspach said. “It has been a hard-fought battle on many fronts to get to this day. Jackie’s positive attitude and will to survive combined with the persistence and skill of the surgeons and medical teams – everyone working together, that’s what makes miracles happen.”