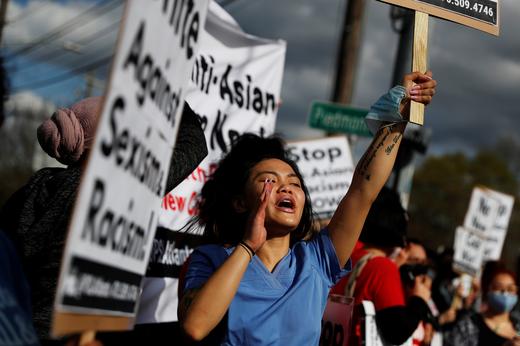 ATLANTA —  A White gunman has been charged with killing eight people, most of them Asian women, in attacks at three Atlanta-area massage parlors on Tuesday.

Police have said that the suspect, 21-year-old Robert Aaron Long, had been previously treated for sex addiction and had frequented the spas. It’s not clear whether the spas affected were places of sex work, but during a news conference Atlanta Mayor Keisha Lance Bottoms said the businesses were operating legally.

“We are not about to get into victim blaming, victim shaming, here,” she said. “As far as we know in Atlanta, we have not had any 911 calls from that location. I believe one minor call on someone stealing some keys. So we don’t know additional information about what his motives were, but we certainly will not begin to blame victims.”

After the attack, hundreds of Asian Americans and Pacific Islanders turned to social media to air their feelings and began the hashtag #StopAsianHate, which became a top trending topic on Twitter.

Authorities said Long had told the police that the attack was not racially motivated, but six women were identified as Asian American.

Asian Americans have been racially targeted since the beginning of the pandemic.

Atlanta police have not released the names of the four remaining victims as they were still notifying next of kin, but have confirmed all four to be women.

“Law enforcement needs some training and understanding what a hate crime is,” Huang said. “This man identified targets owned by Asians. The gunman was very clearly going after a targeted group of people.”

Huang also said she is worried that not classifying the attack as a hate crime will discourage others from coming forward and seeking help.

After the incident, a Facebook account tied to Cherokee County Sheriff’s Capt. Jay Baker promoted a t-shirt with racist language about China and the Coronavirus last year. It has since been deleted.

Activists said that it undermines public trust in the investigation.

“After the month and year we had, we knew our folks needed the time to come together safely just to grieve and heal and mourn and speak to what’s happening,” Seshadri said. “Our folks are pissed off and ready to fight. The way we get through this is together by organizing our people and feeling solidarity.” Numerous Asian American organizations have said that former President Trump’s rhetoric has emboldened people to express anti-Asian or anti-immigrant views, as Trump and others had used racial terms to describe the Coronavirus when it first was identified in China.

Nearly 3,800 incidents have been reported to Stop AAPI Hate, a California-based reporting center for Asian American Pacific Islanders, and its partner groups since last March.