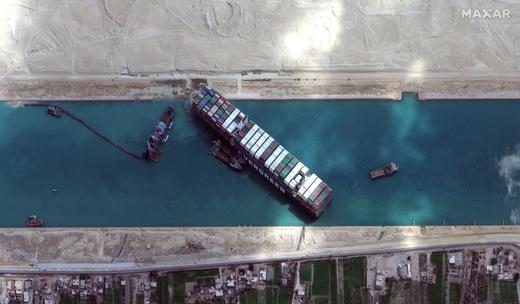 A view shows the container ship Ever Given in the Suez Canal in this photo taken on March 28. Photo: Maxar Technologies satellite image via Reuters

EGYPT — Ever Given, the 224,000-ton container ship that has captured the world’s attention in recent days as it remained stuck in the Suez Canal for nearly a week, has been partially dislodged, though more work is required before it is fully afloat.

The Suez Canal in Egypt is one of the world’s busiest trade-ways. It is estimated that $14 million every day in transit fees have been lost due to the gigantic container ship blocking the passage of other cargo ships through the canal. Billions of dollars of cargo were backlogged on more than 350 ships awaiting passage.

The Suez Canal Authority has said that rescue teams started digging deeper and closer to the ship on Sunday, with dredging 18 meters (59 feet) at the front of the ship. More than 27,000 cubic meters (953,000 cubic feet) of sand has been removed so far. Ships carrying essential items like fuel and cargo were blocked from entering the canal on both sides, with growing concerns over the impact on global supply chains.

Mohab Mamish, the former head of the Suez Canal and Egyptian Presidential seaport adviser, told CNN Arabic that the canal is expected to be ready for passage by Monday. Egyptian officials are hopeful that crews plan to refloat the vessel later today. Ever Given, a Panama-flagged cargo ship blocks the Suez Canal almost a week after it got stuck sideways in the crucial waterway. Engineers on Monday “partially refloated” the colossal container ship that continues to block traffic through the Suez Canal. Photo: Mohamed Elshahed/AP

CNN reports that there were promising signs early Monday when the rear of the vessel was freed from one of the canal’s banks, but the boss of the Dutch company working on the operation says its bow is still stuck “rock solid.” A Dutch salvage team working on freeing the vessel said it had been rotated 20 degrees, but moving the bow away from the canal bank, where it remains stuck in sandy clay, will be more difficult

People at the canal began cheering as news of Monday’s progress came in. “Thank God the ship has floated,” one person can be heard saying in a video, as the surrounding boats blow their horns in celebration. “God is great. The ship has floated.”

As of now, the Ever Given has been mostly straightened along the eastern bank of the canal and further tugging operations would resume once the tide rose later in the day. A source involved in the salvage operation told Reuters they were re-ballasting the ship and expected that with a favorable tide, cargo would not need to be removed

About 15 percent of world shipping traffic transits the Suez Canal, which is an important source of foreign currency revenue for Egypt. On Monday, Egyptian President Abdel Fattah al-Sisi, who had remained publicly silent on the blockage, said Egypt had ended the crisis and assured resumption of trade through the canal.