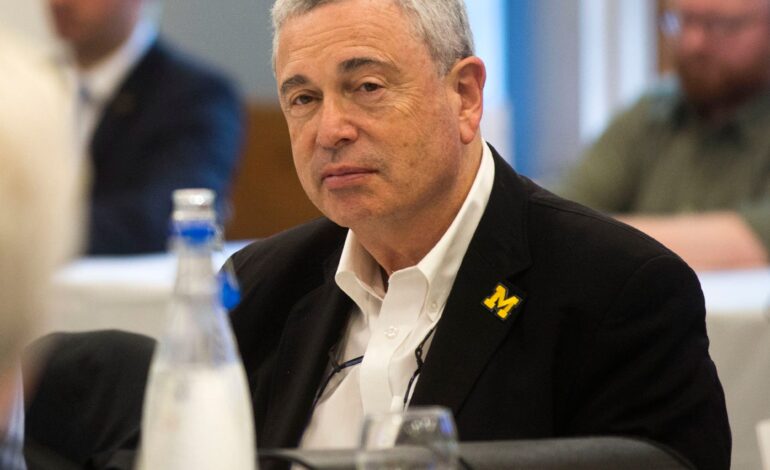 After a firestorm of criticism and calls for his resignation, Weiser said on Twitter that his comments “are clearly being taken out of context.”

He reportedly made the original comments while taking questions from the audience at a North Oakland Republican Club.

The video, which had been obtained by The Detroit News, shows someone in the crowd asking how to unseat U.S. Representatives Fred Upton of St. Joseph and Peter Meijer of Grand Rapids Township, who were among 10 House Republicans to support the impeachment of former President Trump in January.

Weiser responded by saying that the party is focused on beating the “three witches” in 2022, which appeared to be referring to Governor Whitmer, Attorney General Dana Nessel and Secretary of State Jocelyn Benson, the three statewide Democratic leaders who are up for re-election next year.

When someone in the crowd asked about the “witches in our own party”, Weiser responded by referencing assassination.

“Ma’am, other than assassination, I have no other way… other than voting out. OK?” Weiser said. “You people have to go out there and support their opponents. You have to do what you need to get out the vote in those areas. That’s how you beat people.” Democratic University of Michigan regents Mark Bernstein and Jordan Acker, who serve on the Board of Regents with Weiser, called on him to resign.

“Ron Weiser’s reckless and dangerous language does not reflect the values of our board and our institution,” Acker, the board’s vice chair, said. “Comments about removal by ‘assassination’ are a literal attack on our democracy and are incredibly dangerous in light of the Jan. 6 insurrection at the Capitol.”

Bernstein also condemned the comments as “blatantly sexist”, “dangerous” and “damaging to our state and the University of Michigan.”

“Our job as regents is to be responsible stewards of the University of Michigan,” Bernstein said. “In doing so we must protect democracy, honor public service and support our students. Regent Weiser has failed to do so. Our university and the people of this state deserve better. He should resign.”

“While I should have chosen my words more carefully, anyone who knows me understands I would never advocate for violence,” he tweeted. “I’ve spoken with Rep(s) Upton and Meijer personally. My off-the-cuff comments received more scrutiny from the media and leftists in the last 24 hours than the governor’s handling of COVID, the deaths she caused in nursing homes and unemployment issues impacting too many hard-working Michiganders to this day.”

Ted Goodman, a spokesman for the Michigan Republican Party, said that Weiser and the party’s executive director, Jason Roe, made it clear that it’s up to the voters to determine nominees.

“The chairman has personally donated to all Republican congressmen in Michigan and is focused on defeating Democrats, rather than involving the party in primary fights,” Goodman said. “The chairman was making it clear that the primary election process is how we decide our nominees for office. To suggest anything else is dishonest and irresponsible.”

Weiser repeatedly referenced the “three witches” during his speech. “Our job now is to soften up those three witches and make sure that when we have good candidates to run against them, that they are ready for the burning at the stake,” Weiser said. “And maybe the press heard that, too.”

Nessel responded on Twitter, asking if she, Whitmer and Benson were “witches who magically decrease COVID spread, increase voter turnout and hold sexual predators accountable without any help from the legislature” before saying, “sign me up for that coven. Do better, Michigan GOP.”

“In an increasingly vitriolic political environment, we should all do better to treat each other with respect, myself included,” his statement said. “I fell short of that the other night. I apologize to those I offended for the flippant analogy about three women who are elected officials and for the off-hand comments about two other leaders.”

In his apology, Weiser also said that he has “never advocated for violence and never will.”

Nessel also said that the remarks will inspire further death threats and violence. “As a gay, Jewish woman, I have long since learned to respond to hateful rhetoric with humor,” Nessel said on Twitter. “But as a prosecutor, I know these remarks are certain to inspire further death threats, which will eventually be acted upon. Ron Weiser will surely react with shock and deny any culpability.”

Lavora Barnes, Michigan’s Democratic Party chairwoman, called on Weiser to resign from U of M for emboldening “the fringes at all costs.”

“As a member of the University of Michigan’s Board of Regents, he oversees millions of taxpayer dollars. It’s clear his comments do not reflect the values of the university’s board, faculty and student body,” Barnes said. “His statements are not only sexist, but markedly dangerous and will only serve to damage the institution’s reputation. We call on him to resign immediately.”

Weiser said that he will not resign.

In a statement, U of M’s Lecturers’ Employees Organization (LEO) also called on Weiser to resign immediately. If he does not, the LEO has called on the regents to remove him from all committees and have his name removed from Weiser Hall, a building on campus.

“LEO commits to work with other members of the (U of M) community to bring other forms of nonviolent pressure to bear on Mr. Weiser to resign his position as regent, should this prove necessary,” the statement said. “We stand with women and non-binary members of the U of M community in opposition to this hateful rhetoric and pledge to make the university a more inclusive and welcoming place.”

At press time, the U of M Board of Regents were reportedly having a special meeting to “discuss recent events” at 9:30 a.m. on April 2.