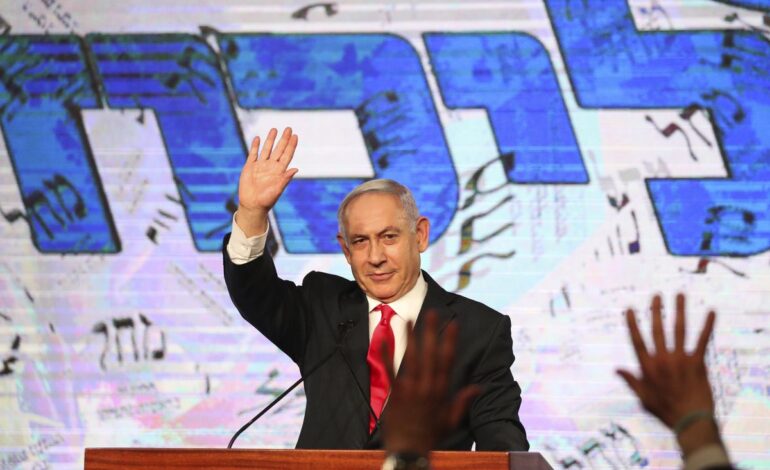 The fourth election in just two years brought a stinging rebuke for Netanyahu, the most dominant figure in Israeli politics in a generation.

A “major setback” was the recurring term in many news headlines reporting on the outcome of Israel’s general elections of March 23. While this depiction specifically referred to Israeli Prime Minister Benjamin Netanyahu’s failure to secure a decisive victory in the country’s fourth elections in two years, this is only part of the narrative.

Certainly, it was a setback for Netanyahu, who has repeatedly resorted to Israeli voters as a final lifeline in the hope of escaping his ever-growing list of problems — splits within his Likud Party, the constant plotting of his former right coalition partners, his own corruption trials and his lack of political vision that does not cater to his and his family’s interests.

Yet, as was the case in three previous elections, the outcome of the fourth was the same. This time, Netanyahu’s right-wing camp, thus potential government coalition partners, consists of even more ardent right-wing parties, including, aside from the “Likud”, which won 30 Knesset seats, “Shas”, with nine seats, “United Torah Judaism” with seven and “Religious Zionism” with six. At 52 seats only, Netanyahu’s base is more vulnerable and more extreme than ever before.

The fourth election in just two years brought a stinging rebuke for Netanyahu, the most dominant figure in Israeli politics in a generation

“Yamina”, on the other hand, which emerged with seven seats, is a logical partner in Netanyahu’s possible coalition. Headed by an ardent right-wing politician, Naftali Bennett, who assumed the role of minister in various Netanyahu-led right-wing coalitions. He sits, ideologically speaking, on the right of Netanyahu. A keen politician, Bennett has, for years, tried to escape Netanyahu’s dominance and to eventually claim the leadership of the right. While joining another right-wing coalition, again headed by Netanyahu, is hardly a best-case scenario, Bennett might reluctantly return to the Netanyahu camp for now, because he has no option.

Bennett could, however,  take another radical path, like that taken by former Likudist Gideon Sa’ar of “New Hope” and Avigdor Lieberman of “Yisrael Beiteinu”, ousting Netanyahu, even if the alternative means forming a shaky, short-lived coalition.

Indeed, the anti-Netanyahu camp does not seem to have much in common, neither in terms of politics, ideology nor ethnicity — a crucial component in Israeli politics — than their collective desire to dispose of Netanyahu. If an anti-Netanyahu coalition is, somehow cobbled together — uniting “Yesh Atid” (17 seats), “Kahol Lavan” (eight), “Yisrael Beiteinu” (seven), “Labor” (seven), “New Hope” (six), the Arab “Joint List” (six) and “Meretz” (six) — the coalition would still fail to reach the required threshold of 61.

To avoid returning to the polls for the fifth time within approximately two years, the anti-Netanyahu coalition would be forced to cross many political red lines

To avoid returning to the polls for the fifth time within approximately two years, the anti-Netanyahu coalition would be forced to cross many political red lines. For example, former Netanyahu’s anti-Arab allies, namely Lieberman and Sa’ar, would have to accept joining a coalition that includes the Arab “Joint List.” The latter would have to do the same thing, cooperating with political parties with avowedly racist, chauvinistic and anti-peace agendas.

Despite this, the anti-Netanyahu coalition would still fail to secure the needed numbers. At 57 seats, they still need a push either from Bennet’s “Yamina” or Mansour Abbas’ “United Arab List (Ra’am).”

Bennett, known for his ideological rigidity, understands that a coalition with the Arabs and the left could jeopardize his position within his ideological base: The right and the far-right. If he is to join an anti-Netanyahu coalition, it would be for the sole purpose of passing legislation at the Knesset that prevents politicians on trial from participating in elections. This has been Lieberman’s main strategy for quite some time. Once this mission is achieved, these odd coalition partners would pounce on each other to claim Netanyahu’s position at the helm of the right.

For Mansour Abbas’ “Ra’am”, however, the story is quite different. Not only did Abbas betray desperately needed Arab unity in the face of an existential threat posed by Israel’s growing anti-Arab politics, he went on to suggest his willingness to join a Netanyahu-led coalition.

However, even for the opportunistic Abbas, joining a right-wing coalition with groups that champion such slogans as “Death to the Arabs” can be extremely dangerous. From the perspective of Arabs in Israel, Abbas’ politics already borders on treason. Joining the chauvinistic, violent Kahanists — who ran as part of the “Religious Zionism” list — to form a government that aims at saving Netanyahu’s political career would place this inexperienced and foolhardy politician in direct confrontation with his own Palestinian Arab community.

Alternatively, Abbas may wish to vote in favor of the anti-Netanyahu coalition as a direct partner, or from the outside. Similar to Bennett, both options would make Abbas a potential kingmaker, an ideal scenario from his point of view and less than ideal from the point of view of a coalition that, if formed, would be unstable.

Netanyahu failed to achieve a clear majority, but his enemies, too, failed to make a case to Israeli voters of why Netanyahu should be shunned from politics altogether

Consequently, it is hardly sufficient to categorize the outcome of the latest Israeli elections as a “setback” for Netanyahu alone. While that is true, it is also a setback for everyone else. Netanyahu failed to achieve a clear majority, but his enemies, too, failed to make a case to Israeli voters of why Netanyahu should be shunned from politics altogether. The latter remains the uncontested leader of the Israeli right and his Likud party still leads with a 13 seats difference from his closest rival.

Though the center temporarily unified in previous elections in the form of Kahol Lavan (“Blue and White”), it quickly disintegrated; and this is equally true for the once unified Arab parties. Disuniting just before the fourth elections, these parties squandered Arab votes and, with it, any hope that racist, militaristic and religiously zealot Israeli politics could possibly be fixed from within.

Whether Netanyahu goes or stays, the next Israeli government is likely to remain firmly within the right

This means that, whether Netanyahu goes or stays, the next Israeli government is likely to remain firmly within the right. Moreover, with or without Israel’s longest-serving prime minister, Israel is unlikely to produce a politically unifying figure, one who is capable of redefining the country beyond Netanyahu-style cult of personality.

As for ending the Israeli occupation of Palestine, dismantling apartheid and, with it, the illegal Jewish settlements, these remain a distant hope, as these subjects were hardly part of the conversation that preceded the last elections.