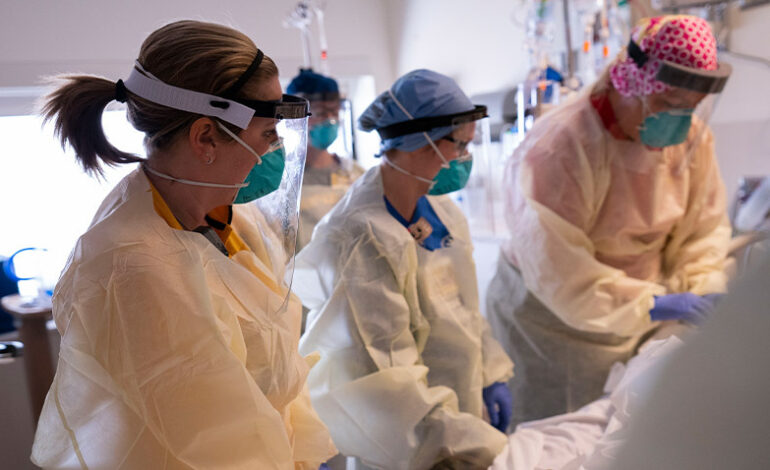 With COVID-19 cases continuing to rise to dangerous levels, Michigan officials have asked the Biden administration to increase supplies of life-savings vaccines, though a positive response has not come from the White House.

But the administration has so far stuck to a policy of assigning vaccine doses based on state populations, and not relative to the COVID-19 rates in different areas.

“Increasing the allocation of vaccines to Michigan will help the state effectively deal with the surge in cases,” Dingell and fellow Rep. Fred Upton (R-Kalamazoo) said in a letter to the administration. “Currently, federal vaccine allocation is population-based and does not account for the rising COVID-19 case count or public health situation that states like Michigan are facing.”

The lawmakers warned that the surge in cases could mean further overwhelming health care systems in the state, as with previous spikes. As of now, hospitals have begun canceling surgeries to accommodate the rapid increase in COVID-19 hospitalizations and multiple hospitals throughout the state are either at or nearing capacity as a result of the increased COVID-19 spread in recent days.

“Surging additional vaccines into Michigan and other hard-hit areas is consistent with guidance from public health experts,” the pair said. “Deploying additional COVID-19 vaccine doses in this manner will allow the federal government to make the most effective use of its current vaccine supply and bring us closer to an end to the pandemic.”

STAT News reported the White House acknowledged the dire situation in Michigan during a Wednesday press briefing. But its officials also argued that it is too early in the national vaccine campaign to begin targeting supply based on case rates.

The administration has, however, increased direct access to vaccines for community health centers and increased the number of pharmacy locations that can order them. There are other positive numbers in the U.S. when it comes to vaccines: The country is currently administering roughly 3 million vaccine doses per day. Almost 5 million doses have been administered in Michigan alone.

Biden announced on Tuesday that he would direct states to open vaccine eligibility to all adults by April 19, almost two weeks earlier than his prior goal of May 1. Michigan, already opened that eligibility on April 5.

According to data from the Centers for Disease Control and Prevention (CDC), the U.S. government will allocate nearly 85 percent fewer Johnson & Johnson vaccine doses to states next week, due to uneven production related in part to problems at a Baltimore manufacturing plant.

The allocations will fall to 785,500 doses from 4.95 million doses, according to the report.