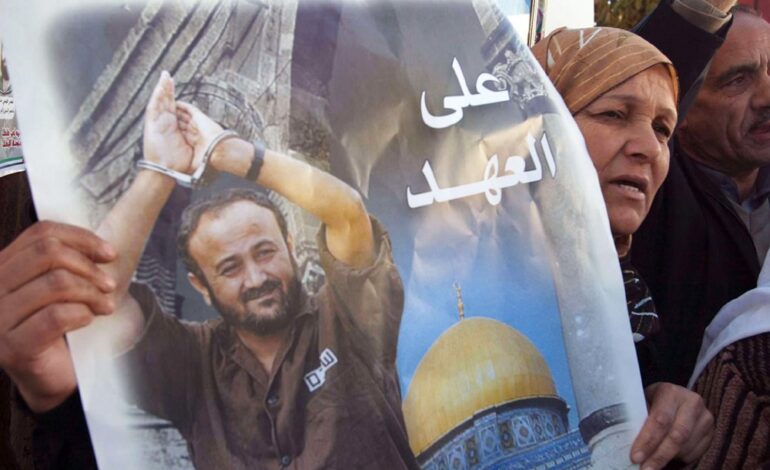 If imprisoned Palestinian leader Marwan Barghouti becomes the president of the Palestinian Authority (PA), the status quo will change substantially. For Israel, as well as for the current PA president, Mahmoud Abbas, such a scenario is more dangerous than another strong Hamas showing in the upcoming Palestinian parliamentary elections.

The long-delayed elections, now scheduled for May 22 and July 31 respectively, will not only represent a watershed moment for the fractured Palestinian body politic, but also for the Fatah Movement, which has dominated the PA since its inception in 1994. The once revolutionary movement has become a shell of its former self under the leadership of Abbas, whose only claim to legitimacy was a poorly contested election in January 2005, following the death of former Fatah leader and PA President Yasser Arafat.

Though his mandate expired in January 2009, Abbas continued to “lead” Palestinians. Corruption and nepotism increased significantly during his tenure and, not only did he fail to secure an independent Palestinian State, but the Israeli military occupation and illegal settlements have deepened and grown exponentially.

Abbas’ rivals from within the Fatah Movement were sidelined, imprisoned or exiled. A far more popular Fatah leader, Marwan Barghouti, was silenced by Israel as he was thrown into an Israeli prison in April 2002, after a military court found him guilty of involvement in Palestinian resistance operations during the uprising of 2000. This arrangement suited Abbas, for he continued to doubly benefit: From Barghouti’s popularity, on the one hand, and his absence, on the other.

When, in January, Abbas declared that he would hold three successive rounds of elections — legislative elections on May 22, presidential elections on July 31 and Palestinian National Council (PNC) elections on August 31 — he could not have anticipated that his decree, which followed intense Fatah-Hamas talks, could potentially trigger the implosion of his own party.

With money pouring in from donor countries, Fatah used its largesse to keep dissent at minimum and, when necessary, to punish those who refused to toe the pro-Abbas line

The Fatah-Hamas rivalry has been decades’ long, but intensified in January 2006 when the latter won the legislative elections in the occupied territories. Hamas’ victory was partly attributed to Fatah’s own corruption, but internal rivalry also splintered Fatah’s vote.

Although it was Fatah’s structural weaknesses that partly boosted Hamas’ popularity, it was, oddly, the subsequent rivalry with Hamas that kept Fatah somehow limping forward. Indeed, the anti-Hamas sentiment served as a point of unity among the various Fatah branches. With money pouring in from donor countries, Fatah used its largesse to keep dissent at minimum and, when necessary, to punish those who refused to toe the pro-Abbas line. This strategy was successfully put to the test in 2010 when Mohammed Dahlan, Fatah’s “strong man” in Gaza prior to 2006, was dismissed from Fatah’s central committee and banished from the West Bank, as he was banished from Gaza four years earlier.

But that convenient paradigm could not be sustained. Israel is entrenching its military occupation, increasing its illegal settlement activities and is rapidly annexing Palestinian land in the West Bank and Jerusalem. The Gaza siege, though deadly and tragic, has become routine and no longer an international priority. A new Palestinian generation in the occupied territories cannot relate to Abbas and his old guard and is openly dissatisfied with the tribal, regional politics through which the PA, under Abbas, continues to govern occupied and oppressed Palestinians.

Possessing no strategies or answers, Abbas is now left with no more political lifelines and few allies.

With dwindling financial resources and faced by the inescapable fact that 85-year-old Abbas must engineer a transition within the movement to prevent its collapse in case of his death, Fatah was forced to contend with an unpleasant reality: Without new elections the PA would lose the little political legitimacy with which it ruled over Palestinians. Abbas was not worried about another setback, as that of 2006, when Hamas won the majority of the Palestinian Legislative Council (PLC)’s seats. Until recently, most opinion polls indicated that the pro-Abbas Fatah list would lead by a comfortable margin in May, and that Abbas would be re-elected president in July. With his powers intact, Abbas could then expand his legitimacy by allowing Hamas and others into the PLO’s Palestinian National Council — Palestine’s parliament in the Diaspora. Not only would Abbas renew faith in his Authority, but he could also go down in history as the man who united Palestinians.

But things didn’t go as planned and the problem, this time, did not come from Hamas, but from Fatah itself – although Abbas did anticipate internal challenges. However, the removal of Dahlan, the repeated purges of the party’s influential committees and the marginalization of any dissenting Fatah members throughout the years must have infused Abbas with confidence to advance with his plans.

The first challenge emerged on March 11, when Nasser al-Qidwa, a well-respected former diplomat and a nephew of Yasser Arafat, was expelled from the movement’s Central Committee for daring to challenge Abbas’ dominance. On March 4, Qidwa decided to lock horns with Abbas by running in the elections in a separate list.

The second and bigger surprise came on March 31, just one hour before the closing of the Central Election Commission’s registration deadline, when Qidwa’s list was expanded to include supporters of Marwan Barghouti, under the leadership of his wife, Fadwa.

The PA president is now in an unenviable position. Canceling the elections would lead to strife, if not violence

Opinion polls are now suggesting that a Barghouti-Qidwa list not only would divide the Fatah Movement, but would actually win more seats, defeating both the traditional Fatah list and even Hamas. If this happens, Palestinian politics would turn on its head.

Moreover, the fact that Marwan Barghouti’s name was not on the list keeps alive the possibility that the imprisoned Fatah leader could still contest in the presidential elections in July. If that, too, transpires, Barghouti will effortlessly beat and oust Abbas.

The PA president is now in an unenviable position. Canceling the elections would lead to strife, if not violence. Moving forward means the imminent demise of Abbas and his small but powerful clique of Palestinians who benefited greatly from the cozy political arrangement they created for themselves.

As it stands, the key to the future of Fatah is now held by a Palestinian prisoner, Marwan Barghouti, who has been kept by Israel, largely in solitary confinement, since 2002.