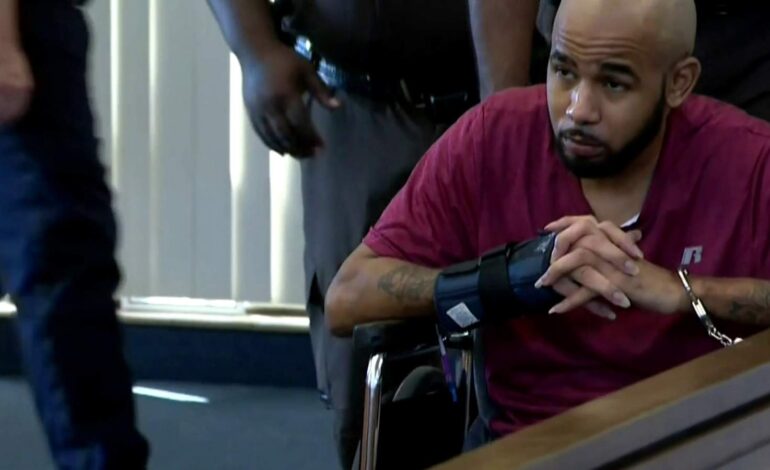 Eddie Ray-Jr. Johnson, charged in the death of his domestic partner, an off duty Detroit police officer, was granted bond.

DETROIT — A Garden City man charged in the shooting death of his domestic partner, an off duty Detroit police officer, was granted bond.

Eddie Ray-Jr. Johnson was charged with the killing of Elaine Williams in their home on June 2, 2019 in Garden City.

Officers had arrived at the home in the 200 block of Belton Street at 11:45 p.m. and found Williams dead inside with multiple gunshot wounds. Johnson was charged with first-degree murder and felony firearm. Judge Lawrence Talon reduced Johnson’s bond from remand status to a $100,000 or 10 percent bond with a GPS tether and house arrest for a medical procedure.

Williams’ sister said that Williams’ life was worth more than that.

“Her life was worth more than any bail amount,” Keisha Kemble said. “And definitely more than $10,000. She doesn’t get a chance to watch her boys grow up and be there for key moments in their lives. She wasn’t able to be there for my nephew’s 13th birthday, see him graduate from middle school or my younger nephew graduate from kindergarten..”

Detroit police chief James Craig said he wants to know why a man accused of killing an officer in an act of domestic violence was given such a low bond.

“She was shot five times,” Craig said. “One of her two sons remained in the home when this incident occurred. The defendant, Eddie Ray-Jr. Johnson, took his biological son out of the residence to a location nearby prior to initiating the attack on our beloved sergeant, Elaine Williams. District court judges and magistrates are confusing non-violent misdemeanors with violent criminals. There are just too many cases like this. This is not acceptable and I’m going to continue to support and advocate for the victims and families of our communities.”

Wayne County Prosecutor Kym Worthy said there will be an appeal coming.

“This is a ridiculously low bond for a first-degree murder case,” she said. “It was inappropriate and the Wayne County Prosecutor’s Office will be appealing the court’s bond decision.”

Bill Bazzi responds to accusations of faking his military service

Hussein Hachem looking for a seat on the Charter Revision Commission