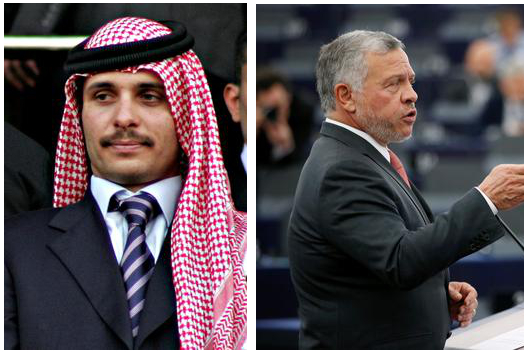 The rift between Jordan's former crown prince, Hamza bin Hussein, and King Abdullah II has been exacerbated by economic discontent and COVID-19 deaths in the country

AMMAN — Unprecedented public criticism of Jordan’s monarchy by a senior royal who has been placed under house arrest has shaken the country’s image as an island of stability in the Middle East. In a video passed by his lawyer to the BBC, Hamza said he had been placed under house arrest and criticized Jordan’s leaders as a corrupt few who have placed their interests above those of the public.

“Damage has happened. For the first time we have someone rocking the image of that peaceful, stable kingdom,” said a former minister.

Abdullah, 59, removed Hamza from his position as crown prince in 2004, thwarting the ambitions of his stepmother, Queen Noor, widow of the late King Hussein of Jordan, who had groomed her eldest son for the throne since childhood.

Stripped of any power, Hamza was subsequently sidelined. Abdullah consolidated his power by making his son Prince Hussein bin Abdullah the heir apparent and in the past year has appeared to be preparing him intensively for his future role as king.

Meanwhile Hamza has been building ties with disgruntled tribal leaders at the head of a loose anti-government protest movement called the Herak, which in recent weeks resumed its calls for protests against corruption.

The COVID-19 pandemic has dealt a severe blow to Jordan’s economy, pushing unemployment to record levels and deepening poverty.

Political sources say Hamza put himself at risk with frequent visits to tribal gatherings where people openly criticize the king.

Hamza is not seen to have any real clout and those detained as part of what the military said was an ongoing security investigation mostly number among his close aides.

Although unprecedented, Hamza’s open dissent was unlikely to pose a serious threat to the monarchy, especially without the support of Jordan’s powerful military where the king enjoys widespread loyalty, analysts and political sources said.

Any attempt to seize power would most probably have failed without the support of the U.S. and regional powers, who expressed support for the king and any measures needed to ensure Jordan’s security.

On Wednesday, Abdallah said sedition attempts by his half-brother had been quashed.

In his first statement since the affair came to light, the monarch said the crisis that shook the stability of the kingdom was the “the most painful” because it came from both inside the royal family and outside it.

“Nothing comes close to what I felt — shock, pain and anger — as a brother and guardian of the Hashemite family and a leader of this dear people,” Abdullah said in a letter published by the state news agency.

He said the country was now stable and secure. “Hamza today is with his family in his palace under my care,” he said.

The government said Hamza liaised with people linked to foreign parties seeking to destabilize Jordan and that he had been under investigation for some time. Officials say between 14 and 16 people have been arrested in connection with the alleged plot

Hamza pledged allegiance to Abdullah late on Monday following mediation by the royal family, two days after the military warned him over actions it said were undermining Jordan’s security and stability.

The government said Hamza liaised with people linked to foreign parties seeking to destabilize Jordan and that he had been under investigation for some time. Officials say between 14 and 16 people have been arrested in connection with the alleged plot.

President Biden reaffirmed the U.S.’ strong support for Jordan and the leadership of Abdullah in a call with the king on Wednesday, the White House said in a statement.

“They discussed the strong bilateral ties between Jordan and the United States, Jordan’s important role in the region and strengthening bilateral cooperation on multiple political, economic and security issues,” the statement said.

Jordan’s former finance minister, Bassem Awadallah, remained in detention as part of ongoing investigations into activities aimed at destabilizing the country, the state news agency cited an official source as saying on Thursday.

When Hamza visited the relatives of COVID-19 patients who died after a hospital ran out of oxygen, he triggered the rift in Jordan’s monarchy, according to a Reuters’ analysis.

The March 14 visit to the city of Salt was, in the words of a senior establishment figure, the “straw that broke the camel’s back”, coming as it did hours after King Abdullah had visited the hospital and publicly scolded management for the nine deaths.

Hamza made the trip to console the bereaved six days before Hussein went to the city to do the same, a move that some officials said had upstaged his younger rival for the throne. Eight people familiar with the situation said that Hamza’s visit had undermined his half-brother the king and prompted authorities to place him under house arrest and accuse him of involvement in activities aimed at destabilizing the country.

Some experts worry that the feud could re-ignite, given underlying problems in Jordan like poverty, joblessness and rising COVID-19 deaths, which they said contributed to tensions spilling into the open.

Hamza was warmly welcomed by families of the deceased in Salt during his visit in March.

Small protests over the hospital’s oxygen shortages had broken out across Jordan and some participants were chanting the prince’s name and calling on him to save the country.

This year he stepped up his trips to rural and provincial areas to meet disgruntled tribal leaders belonging to Herak, many of whose members are army and security retirees.

On social media, Hamza appeared sitting in Bedouin tents sipping tea and conversing with elders who were critical of the king for failing to provide them with enough jobs or financial security.

Although Hamza rarely voiced his opinion publicly, the palace saw the prince’s outreach as a bid to undermine Abdullah and his son’s growing profile as a champion of equal opportunity for the country’s youth, several sources familiar with palace thinking said.

Over the last decade, anger with the authorities over worsening living standards and alleged corruption has triggered major civil unrest in Jordan, mainly in the provincial and Bedouin areas where Hamza has reached out to local leaders.

Over the last 20 years, Hamza cultivated loyalty by emulating his father’s language, voice, behavior and even attire. Tribal sources said the well-mannered, Western-educated prince made a point of learning the dialects of every tribe.

As his popularity appeared to grow, authorities felt the time had finally come to step in.

“He left us with no option,” said one senior political figure.

Army chief of staff Yousef Huneiti arrived at Hamza’s palace in Amman at around 2 p.m. on Saturday.

Hamza was told that mixing with disaffected tribes was a “red line” that he should not have crossed.

In an audio recording leaked by Hamza on social media, the prince reacted angrily. “Sir, forgive me, where were you 20 years ago? I was the crown prince in this country by order from my father, may Allah have mercy on him.

“I made an oath to him that I would continue to serve my country and people so long as I am alive.”