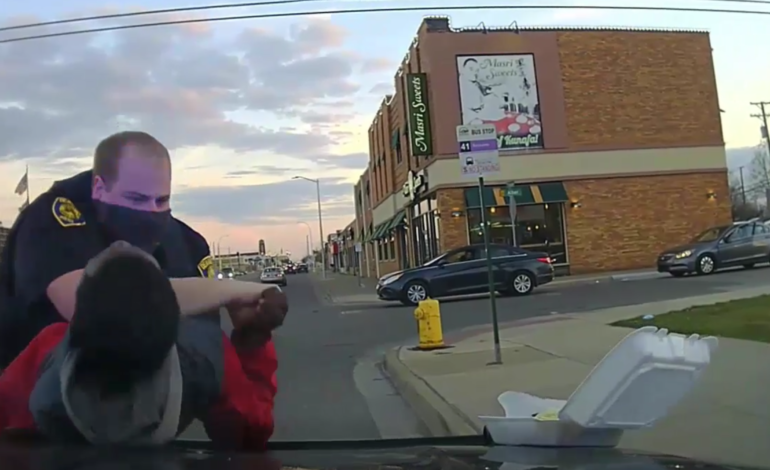 Dearborn investigated an excessive force case one month after settling a $1.25 million lawsuit for the wrongful death of an unarmed Black man. Photo: Dashcam video via Dearborn Police Department

DEARBORN — Just one month after settling a $1.25 million lawsuit for the wrongful death of an unarmed Black man, the city investigated an excessive force case this week.

The activist group Accountability For Dearborn (A4D), has been going to City Council meetings for nearly a year, calling on police reform and action in the city.

In the video posted to multiple social media platforms, the man, who police later identified as Jaquan Murphy, appears to place his items on the hood of the police car. He is then grabbed by the officer by the wrist. He then tries to get away from the officer when the officer forces him against the vehicle. Struggling with the officer, he is heard yelling “kill me” several times, as bystanders help the officer wrestle Murphy to the ground, one pulling Murphy by the feet to get him on the ground. As Murphy falls to the ground the officer continues towards him before pinning him against another vehicle while he screams for help. Multiple people assisted the officer in apprehending the man before the video ended.

“In video footage of the event, a Dearborn police officer slams the man into the hood of the squad car,” A4D said in its Facebook post. “The man responds in fear. The officer chases the man in the middle of a busy road and bystanders jump in to participate in the brutalization. The Dearborn police have a pattern of brutalizing Black people with mental illness. This event is an example of the criminalization and brutalization of Blackness, mental illness and poverty in Dearborn.” Murphy is heard asking the officer, “what did I do?” before the officer tells him to put his food on the hood of the patrol vehicle and proceeds to grab his wrist.

In a media- packet, police said that officers responded to the area of Ford and Shaefer for a person in the street interfering with traffic. The initial officer recognized the man as Murphy from prior police contacts and knew Murphy had outstanding warrants for his arrest. Murphy “resisted arrest by pulling away from the initial officer, saying “No”, and attempting to strike him in the face.” Police say that with the assistance of bystanders and additional officers, Murphy was “safely taken into custody and transported to a local hospital where he was petitioned for psychiatric evaluation.”

Haddad said the officer acted according to his training, and used “containment and control,” instead of “force and submission.”

Haddad told FOX 2 news on Thursday that his department has had 191 document contacts with Murphy. Most of those were non-violent incidents. The responding officer also knew of four outstanding warrants against Murphy.

Haddad told the news station that the officer grabbed Murphy’s wrist as a “safety maneuver,” to make sure Murphy had nothing in his hand while he put handcuffs on him. Haddad said he was proud of the bystanders that helped the officer pin Murphy to the ground while back up arrived.

Haddad said the officer acted according to his training, and used “containment and control,” instead of “force and submission.” Haddad said excessive force “shatters our credibility” as a police department. He said it was important for the department not to use excessive force. Murphy was taken to a hospital for evaluation. Alexandria Hughes, a member of A4D, provided the group’s response to the arrest to The Arab American News.

According to the Dearborn Police Station and the 19th District Court, the man was not booked. If he was not arrested, how was he resisting arrest? – Accountability for Dearborn

“This situation illustrates the violence of our community’s response to Blackness, poverty and mental illness,” the statement said. “The caption for the video asserts that police were called multiple times throughout the day and the past week because people did not like the way this man was asking for resources from the community. Because panhandling is legal in the state of Michigan the police will likely weave a narrative that this man was disorderly and resisted arrest. Following the events of the video, according to the Dearborn Police Station and the 19th District Court, the man was not booked. If he was not arrested, how was he resisting arrest?

“The abuse shown in the video is not an isolated incident, it is part of an uninterrupted pattern. When Dearborn Police perceive a person of color as disobedient they respond by escalating the use of force. Mental illness and disability compound this perception and response. The clear parallels to Luther Gonzalez-Hall, Janet Wilson, Kevin Matthews, Ali Beydoun and Ernest Griglen cannot be understated.”

A4D’s statement also said that the video does not show an example of public safety, but how the city is failing to serve.

“It shows what the police are trained to do: Criminalize Blackness, criminalize poverty and criminalize mental illness,” the statement said. “Police response to this issue was unnecessary and our dependence on police as the sole responders to problems in Dearborn’s communities will continue to threaten our most vulnerable community members. These situations are not inevitable, they are preventable and we must invest in preventing them. We must shift resources and responsibility from the police towards these investments. It is time to divest from the violent legacy of policing so that we can begin investing in community care.”

Dearborn Police Chief Ronald Haddad was unable to be reached for comment, but according to WDIV earlier in the week, he said that the department was “doing a full investigation. There is a lot of false information out there. We will have a full disclosure next week.”