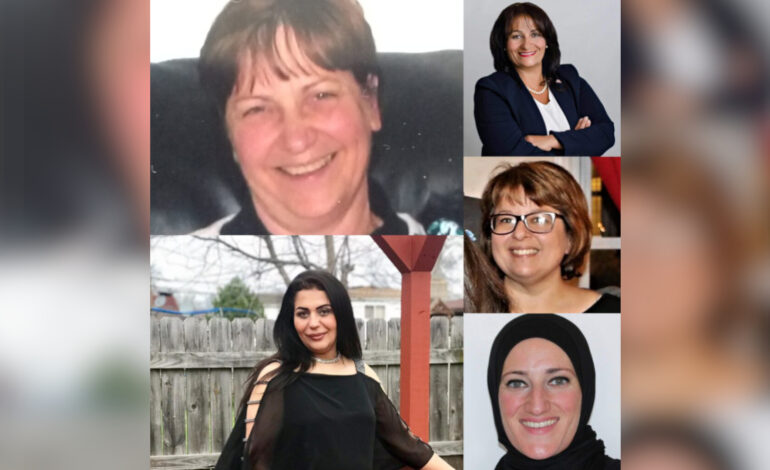 Five winners have been announced for the Women’s Leadership and Community Service Award. (On the left: Marilyn Somers and Zeinab Zein. On the right: Nadia Berry, Lori Fujita, Najah Jannoun.)

Current commissioners were removed from the selection pool out of fairness and the community was asked to submit nominations for Women’s History Month in March.

Somers said she has been a resident since 1976 and volunteering wasn’t really on her mind at the time.

“I never intended on receiving awards or recognition,” she said. “A phone call from Latanya Gater informing me of this honor caught me off guard. I volunteered when my daughter started preschool in 1979, when I came in contact with the Wencels and Barkoffs.”

“They were the reason I was made aware of the D7 Dads Club,” she said. “Volunteers for various programs were needed and working the flag football concession stand that year turned into many years, eventually becoming a member of the board. I was, at one time, president for six years, but continued on the board for well over 30 years. From 2006-2016 I served on the recreation commission and I was asked about three years ago if I wanted to come back and have been serving ever since.”

Berry, who has been on the Crestwood School Board for more than four years, said she is humbled to be a recipient.

“I do what I do for the love I have for children and the community,” she said. “This is such an honor. I come from a family of dedicated community service members. I have served our community’s children for over 24 years as an early childhood liaison for the Dearborn Public Schools and the Crestwood School Board for four and a half years.”

Fujita said she is flattered to be nominated as a recipient of the award.

“I don’t really consider myself an outstanding leader,” she said. “I’m a D7 mom who discovered a long time ago that my school district is full of some phenomenal kids.

“Opening my home for float building, returning more bottles than I can count, grilling some cheese sandwiches, snapping and sharing thousands of photos and lending an ear to a young person that wants to talk is the least I can do. I served on my school board for a decade because it is important for me to do what I can to give our students what they need and deserve in life. These kids have given more to me than I could ever give to them.”

Jannoun is also a Crestwood School Board member.

“I have lived in the city for more than 30 years and have worked as a realtor in the community for the better of 10 years,” she said. “I am a mother of four children and a proud advocate for positive change within our community. Through volunteering with various organizations, I have been able to connect with people and build relationships. I am currently on the Crestwood School Board and feel that there is no better privilege than being able to serve the children of this city as they are our future.”

Zein has been a member for the community for 20 years after immigrating to Dearborn Heights.

“Coming to Dearborn Heights as an immigrant with a computer science and accounting degree, I thought I wouldn’t fit into the societal norms of Dearborn Heights,” she said. “However, the community was quite welcoming. Being a member of Dearborn Heights has given me the opportunity to stay involved within my community and expand my family and friends that I cherish dearly every day.”

This was the commission’s first time doing something like this for Women’s History Month.

The winners will be recognized during the April 27 City Council meeting.