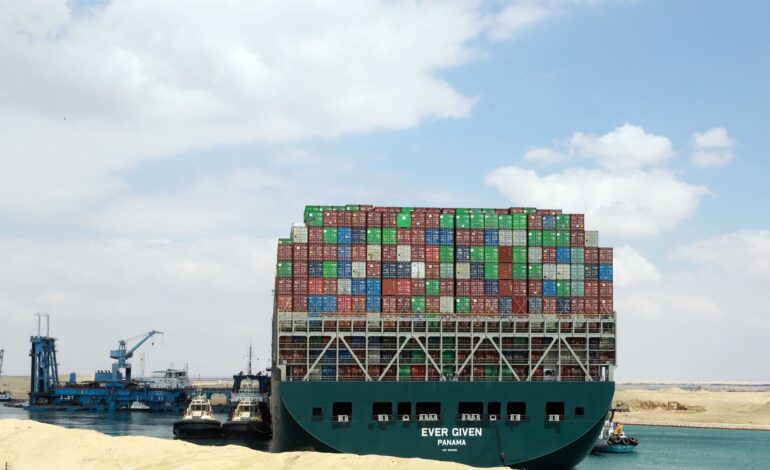 EGYPT — An Egyptian court has ordered the Japanese owner of the massive “Ever Given” cargo ship that got stuck in the Suez Canal last month to pay $900 million in compensation for the impact on economic transit it caused.

The ship is now impounded and its cargo seized by Egyptian authorities.

The “Ever Given” was successfully re-floated on March 29, after salvage operation worked around the clock to dislodge the ship from the banks of the canal. The ship was then moved to the nearby Great Bitter Lake to be inspected for operational capacity and to allow repairs to be carried out. A crew of 25 Indian nationals remain on board the vessel.

Ships carrying vital fuel and cargo were prevented from crossing the canal as the massive ship remained stuck for nearly a week. The Suez Canal Authority (SCA) said the ship’s cargo has been seized until the dispute is resolved.

The ship’s insurer, UK Club, said Tuesday that it had responded to a claim from the SCA for $916 million and questioned its basis.

“Despite the magnitude of the claim, which was largely unsupported, the owners and their insurers have been negotiating in good faith with the SCA,” it said in a statement. “On 12 April, a carefully considered and generous offer was made to the SCA to settle their claim.”

UK Club said the SCA had not provided a detailed justification for this extraordinarily large claim, which includes $300 million for a “salvage bonus” and $300 million for “loss of reputation.”