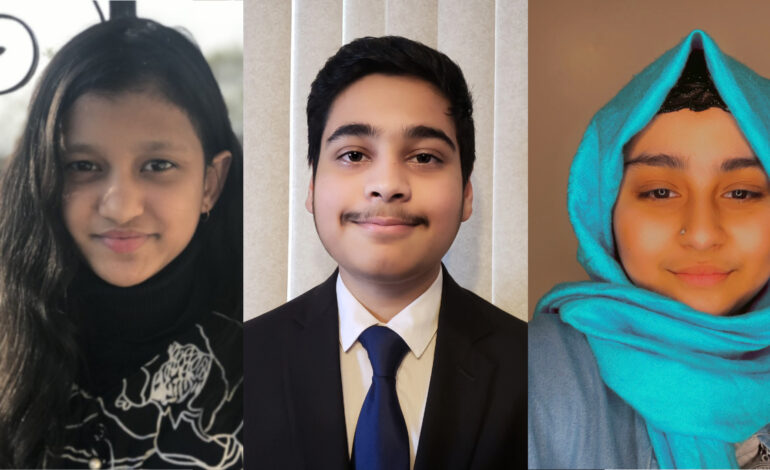 First-place winner Nura Uddin will be advancing to the next level of the competition, along with receiving $300 and a gold medal. Silver medalist Taufiq Islam won $200 and bronze medalist Shayera Chowdhury won $100. The topic was “Healing the World with Optimism”, a timely and important subject, given the events of the past year. Kosciuszko Middle School students Islam, Chowdhury, Uddin and Maha Uddin, along with Dickinson East student Karima Ahmed, worked diligently to craft inspiring speeches for the competition.

This is the first time that all contestants in the annual competition were Bangladeshi American.

On May 5, Optimists of Downtown Detroit’s essay and oratorical winners will celebrate with a Winners’ Circle event.

Kosciuszko Middle School science teacher Rahiel Housey-Johnson has been coaching students for the competition on a volunteer basis for 19 years. The Optimist Club is a service organization that specializes in youth.

Housey-Johnson is part of the Downtown Detroit chapter and is the oratorical co-chairperson. She coaches student participants who are either her current students or are part of the Hamtramck Public School system and want the opportunity at a challenging extra curricular activity. The competition was held on Zoom in March, with the five students from Hamtramck in grades six through eight, though there were more who had to drop out because of commitments. There were eight children in the previous competition in December, also on Zoom, which had been postponed from the beginning of statewide COVID-19 restrictions last March.

“We kept postponing that previous competition and finally decided to have the completion in December because the students had been so patient,” Housey-Johnson said. “Those same kids were invited to quickly make a new speech for the 2021 competition.”

This meant the students only had three months from the last completion to generate a completely unique and original speech and present it at the following competition.

“These kids are that awesome and that dedicated,” the proud speech coach said.