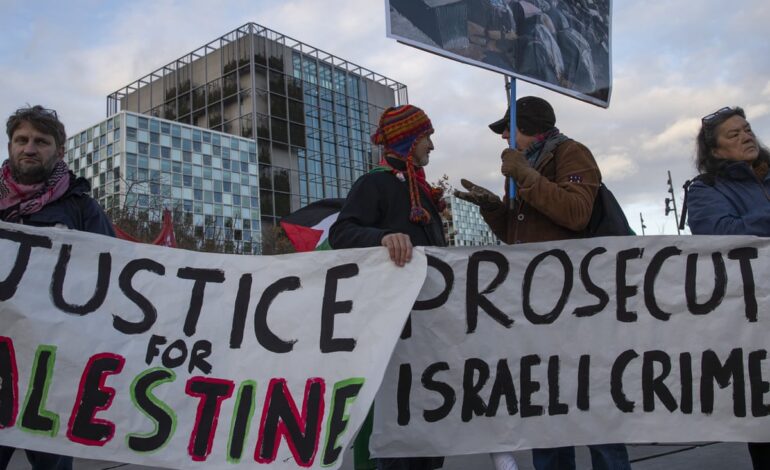 Demonstrators outside the International Criminal Court (ICC) in The Hague in 2019 calling for the Israeli army to be prosecuted for war crimes. Photo: AP

The Israeli government’s position regarding an impending investigation by the International Criminal Court (ICC) of alleged war crimes committed in occupied Palestine has been finally declared by Israeli Prime Minister Benjamin Netanyahu.

“It will be made clear that Israel is a country with rule of law that knows how to investigate itself,” Netanyahu said in a statement on April 8. Subsequently, Israel “completely rejects” any accusations that it has committed war crimes.

But it won’t be so easy for Tel Aviv this time around. True, Israel is not a party to the Rome Statute, according to which the ICC was established, but it can still be held accountable, because the State of Palestine is a member of the ICC.

Palestine joined the ICC in 2015 and the alleged war crimes, which are under investigation, have taken place on Palestinian soil. This grants the ICC direct jurisdiction, even if war crimes were committed by a non-ICC party. Still, accountability for these war crimes is not guaranteed. So, what are the possible future scenarios?

But first, some context …

On March 22, the Palestinian ambassador to the United Nations, Riyad Mansour, declared that “the time has come to stop Israel’s blatant impunity.” His remarks were included in a letter sent to U.N. Secretary-General Antonio Guterres and other top officials at the international body.

There is modest — albeit cautious — optimism among Palestinians that Israeli officials could potentially be held accountable for war crimes and other human rights violations in Palestine. The reason behind this optimism is a recent decision by the ICC to pursue its investigation of alleged war crimes committed in the occupied Palestinian territories.

Mansour’s letter was written with this context in mind. Other Palestinian officials, such as Foreign Minister Riyad al-Maliki, are also pushing in this direction. He, too, wants to see an end to Israel’s lack of accountability.

Till Netanyahu’s official position, the Israeli response has been most predictable. On March 20, Israeli authorities decided to revoke Al-Maliki’s special travel permit in order to prevent him from pursuing Palestinian diplomacy that aims at ensuring the continuation of the ICC investigation. Al-Maliki had, in fact, just returned from a trip to The Hague, where the ICC is headquartered.

Furthermore, Israel is openly attempting to intimidate the Palestinian Authority in Ramallah to discontinue its cooperation with the ICC, as can be easily gleaned from the official Israeli discourse. “The Palestinian leadership has to understand there are consequences for their actions,” an Israeli official told The Jerusalem Post on March 21.

Despite years of legal haggling and intense pressure on the ICC’s outgoing chief prosecutor, Fatou Bensouda, to scrap the investigation altogether, the legal proceedings have carried on unhindered. The pressure was displayed in various forms: Direct defamation by Israel, as in accusing the ICC of anti-Semitism; unprecedented American sanctions on ICC officials and constant meddling and intervention, on Israel’s behalf, by member states that are part of the ICC, and who are described as amici curiae.

They did not succeed. On April 30, 2020, Bensouda consulted with the Court’s Pre-trial Chamber regarding whether the ICC had jurisdiction over the matter. Ten months later, the Chamber answered in the affirmative. Subsequently, the prosecutor decided to formally open the investigation.

Unlike previous attempts at investigating Israeli war crimes, for example the Jenin massacre in the West Bank in 2002 and the various investigations of several Israeli wars on Gaza starting in 2008-09, the forthcoming ICC investigation is different

On March 9, a spokesman for the Court revealed that, in accordance with Article 18 in the Rome Statute, notification letters were sent by the Prosecutor’s Office to “all parties concerned”, including the Israeli government and the Palestinian leadership, notifying them of the war crimes probe and allowing them only one month to seek deferral of the investigation.

Expectedly, Israel remains defiant. However, unlike its obstinacy in response to previous international attempts at investigating war crimes allegations in Palestine, the Israeli response, this time, appears confused and uncertain. On the one hand, Israeli media revealed last July that Netanyahu’s government has prepared a long list of likely Israeli suspects, whose conduct can potentially be investigated by the ICC. Still, the official Israeli response can only be described as dismissive of the matter as being superfluous, insisting that Israel will not, in any way, cooperate with ICC investigators.

Though the Israeli government continues to maintain its official position that the ICC has no jurisdiction over Israel and occupied Palestine, top Israeli officials and diplomats are moving quickly to block what now seems to be an imminent probe. For example, Israeli President Reuven Rivlin was on an official visit to Germany where he, on March 18, met with his German counterpart, Frank-Walter Steinmeier, thanking him on behalf of Israel for opposing the ICC’s investigation of Israeli officials.

After lashing out at the Palestinian leadership for attempting to “legalize” the conflict, through an international investigation, Rivlin renewed Israel’s “trust that our European friends will stand by us in the important fight on the misuse of the International Criminal Court against our soldiers and civilians.”

Unlike previous attempts at investigating Israeli war crimes, for example the Jenin massacre in the West Bank in 2002 and the various investigations of several Israeli wars on Gaza starting in 2008-09, the forthcoming ICC investigation is different. For one, the ICC investigation targets individuals, not states, and can issue arrest warrants, making it legally incumbent on all other ICC members to enforce the Court’s decisions.

Now that all attempts at dissuading the Court from pursuing the matter have failed, the question must be asked: What are the possible future scenarios?

We expect more crimes to be included: Especially, apartheid as a crime against humanity and crimes against Palestinian prisoners by Israeli authorities, especially torture – Dr. Triestino Mariniello

In the case that the investigation carries on as planned, the prosecutor’s next step would be to identify suspects and alleged perpetrators of war crimes. Dr. Triestino Mariniello, member of the legal team that represents the Gaza victims, told me that once these suspects have been determined, “the prosecutor will ask the pre-trial chamber to issue either arrest warrants or subpoena, at least in relation to the crimes already included in the investigation so far.”

These alleged war crimes already include Israel’s illegal Jewish settlements, the Israeli war on Gaza in 2014 and Israel’s targeting of unarmed civilian protesters during Gaza’s Great March of Return, starting in 2018.

Even more ideally, the Court could potentially widen the scope of the investigation, which is a major demand for the representatives of the Palestinian victims.

“We expect more crimes to be included: Especially, apartheid as a crime against humanity and crimes against Palestinian prisoners by Israeli authorities, especially torture,” according to Dr. Mariniello.

In essence, this means that, even after the investigation is officially underway, the Palestine legal team can continue its advocacy to expand the scope of the investigation and to cover as much legal ground as possible.

However, judging from previous historic experiences, ideal scenarios in cases where Israel was investigated for war crimes rarely transpired. A less than ideal scenario would be for the scope of the investigation to remain narrow.

In a recent interview with former U.N. special rapporteur on the situation of human rights in occupied Palestinian Territories, Professor Richard Falk, he told me that even if the narrow scope remains in effect — thus reducing the chances of all victims seeing justice — the investigation is still a “breakthrough.”

In other words, “the Court takes a position that needs to be cautious about delimiting its jurisdiction and, therefore, it tries to narrow the scope of what it is prepared to investigate.”

Professor Falk does not agree with that view, but, according to the seasoned international law expert, “it does represent the fact that the ICC, like the U.N. itself, is subject to immense geopolitical pressure.”

Still, “it’s a breakthrough even to consider the investigation, let alone the indictment and the prosecution of either Israelis or Americans that was put on the agenda of the ICC, which led to a pushback by these governments.”

While the two above scenarios are suitable for Palestinians, they are a non-starter as far as the Israeli government is concerned, as indicated in Netanyahu’s recent statement in which he rejected the investigation altogether. According to some pro-Israeli international law experts, Netanyahu’s decision would represent a missed opportunity.

At the same time, while Palestinians remain cautious about the future of the investigation, hope is slowly rising that, this time around, things may be different and that Israeli war criminals will eventually be held accountable for their crimes

Writing in the Israeli newspaper, Haaretz, international law expert Nick Kaufman had advised Israel to cooperate, only for the sake of obtaining a “deferral” from the Court and to use the ensuing delay for political maneuvering.

“It would be unfortunate for Israel to miss the opportunity of deferral, which could provide the ideal excuse for reinitiating peace talks with the Palestinians,” he wrote, warning that “if Israel squanders such an opportunity it should come as no surprise if, at a later date, the Court will hint that the government has no one but itself to blame for the export of the judicial process to The Hague.”

There are other scenarios, such as even more intense pressures on the Court as a result of ongoing discussions between Israel and its benefactors, whether in Washington or among the amici curiae at the Court itself.

At the same time, while Palestinians remain cautious about the future of the investigation, hope is slowly rising that, this time around, things may be different and that Israeli war criminals will eventually be held accountable for their crimes. Time will tell.

— Romana Rubeo contributed to this article.