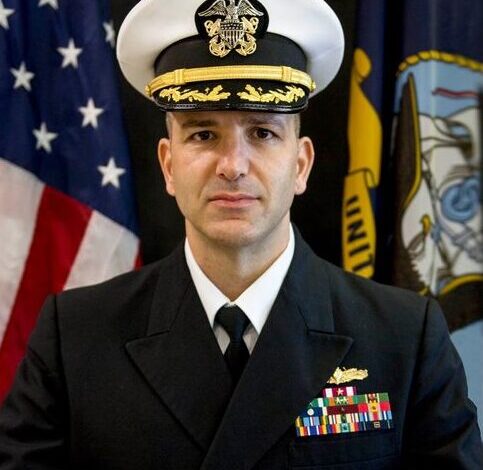 DEARBORN — Commander Houssain “Sam” Sareini of Dearborn has become one of the first Muslim Americans to command a U.S. naval ship.

On April 9, Sareini took command of the Arleigh Burke-class guided-missile destroyer USS Nitze (DDG 94) at a ceremony in Portsmouth, VA, according to a Navy press release.

Sareini has been in the U.S. Navy for nearly 27 years, after having enlisted at the age of 18. He is the brother of Councilman Mike Sareini and the son of former Councilwoman Suzanne Sareini. “I am humbled and privileged to serve as USS Nitze’s commanding officer,” Sareini said. “To wear the cloth of our country and to lead people into harm’s way is a great responsibility. To serve is an honor. ‘We live for others’ is something Islam has taught me and military service allows me to do that.”

Sareini, who is three years younger than his brother, said he joined the military out of an interest in different government organizations.

“I initially joined the military because I was interested in organizations like the FBI,” he said. “I thought the military would help get my foot in the door.”

Councilman Sareini said his family is beyond proud of his brother and his humility.

“He didn’t get to where he is today the easy way,” he said. “He went through this by enlisting at 18-years-old and has had to excel at everything to get to where he is. We believe he is the first Muslim to be in command of his own ship, but that has not yet been 100 percent confirmed.”

According to Mike Sareini, after his first year in the military, his brother was approached about a program started by the late former U.S. Rep. John Dingell (D-Dearborn) and scored “through the roof.” Commander Sam Sareini stands in front of a plaque with his name as commander of the USS Nitze.

“He’s extremely intelligent,” he said. “During that program he got his degree in biochemistry and then went back into the military. I think that says a lot about him, since he didn’t come from a military family or anything.”

“Mayor John B. O’Reilly Jr. joins with the Dearborn City Council in honoring Houssain ‘Sam’ Sareini on his prestigious installation as commander of the USS Nitze,” the post read. “His remarkable military service reflects a strong sense of patriotism and duty, and such impressive accomplishments throughout a long career serve as inspiration to others on what can be achieved through determination, dedication and education.”

Councilman Sareini said that his brother encompasses everything a leader should be.

“He is able to be strong and firm, but also kind and forgiving at the same time,” he said. “People follow him because they believe in him.”

He also said he believes that everyone should consider a career in the military.

“I think the military offers a lot of benefits and I think that a lot of Arab Americans understand that in a lot of countries like European countries and Lebanon that it’s a requirement, but it’s not here in the United States,” he said. “The skills and training provided are invaluable.”

CDR Sareini said the key to success is believing.

“Our culture and community are built on our faith and our families,” he said. “As long as you stay grounded in those two things, you will live a successful life.”