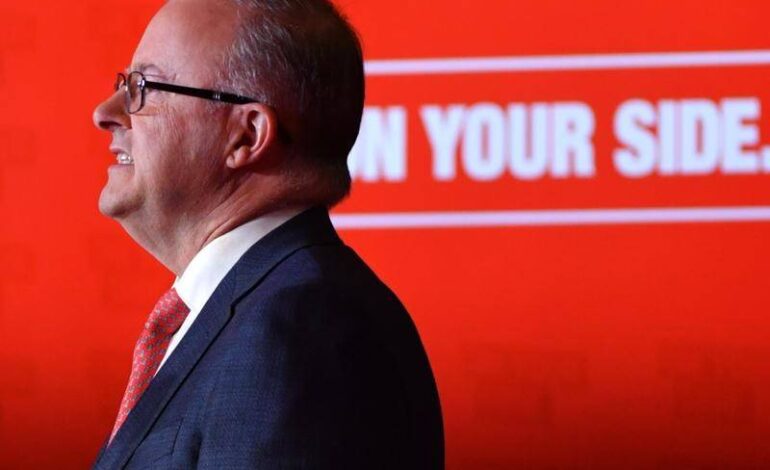 Australia’s Labor Party’s recognition of Palestine as a state on March 30 is a welcomed position, though it comes with many caveats.

Pro-Palestinian activists are justified to question the sincerity of the ALP’s stance and whether Australia’s Labor is genuinely prepared to fully adopt this position should they form a government following the 2022 elections.

Moreover, the matter has been an “important priority” for the ALP for years. In fact, similar language was adopted in the closing session of the Labor conference in December 2018, which supported “the recognition and right of Israel and Palestine to exist as two states within secure and recognized borders”, while adding this important clause: The ALP “calls on the next Labor government to recognize Palestine as a state.”

Unfortunately for Labor, they lost the May 2019 elections, where the Liberal Party maintained the majority, again forming a government under the leadership of Scott Morrison.

Morrison was the prime minister of Australia when, in 2018, the ALP adopted what was clearly a policy shift on Palestine. In fact, it was Morrison’s regressive position on Israel that supposedly compelled Labor to develop a seemingly progressive position on Palestine. Nine days after former President Trump defied international law by officially recognizing Jerusalem as the capital of Israel — and subsequently relocating the U.S. embassy from Tel Aviv to Jerusalem — Morrison flirted with the idea as well, hoping to enlist the support of the pro-Israel lobbies in Australia prior to the elections.

However, Morrison did not go as far as Trump, by refraining from moving his country’s embassy to the occupied city. Instead, he developed a precarious — albeit still illegal — position where he recognized West Jerusalem as Israel’s capital, promising to move his country’s “embassy to West Jerusalem when practical, in support of and after final-status determination.”

Canberra, however, did take “practical” steps, including a decision to establish a defense and trade office in Jerusalem and proceeded to look for a site for its future embassy.

Morrison’s self-serving strategy remains a political embarrassment for Australia, as it drew the country closer to Trump’s illegal, anti-Palestinian stance. While the vast majority of United Nations member states maintained a unified position regarding the illegality of the Israeli occupation of Palestine, asserting that the status of Jerusalem can only be determined based on a negotiated agreement, the Australian government thought otherwise.

As Palestinians, Arabs and other nations mobilized against Australia’s new position, the ALP came under pressure to balance out the Liberal party’s agenda, seen as blindly supportive of military occupation and apartheid.

Morrison’s self-serving strategy remains a political embarrassment for Australia, as it drew the country closer to Trump’s illegal, anti-Palestinian stance

Since the ALP lost the elections, their new policy on Palestine could not be evaluated. Now, according to their latest policy conference conclusion, this same position has been reiterated, although with some leeway, that could potentially allow Labor to reverse or delay that position, once they are in power.

Nonetheless, the Labor position is an important step for Palestinians in their “legitimacy war” against the Israeli occupation.

In a recent interview with Professor Richard Falk, former U.N. special rapporteur on the situation of human rights in the Palestinian territories, the international law expert explained the need to “distinguish symbolic politics from substantive politics.”

“In the colonial wars that were fought after 1945, the side that won usually was the side that won what I call the legitimacy war, which is the ‘symbolic battlefield’, so to speak, and maintain the principled position that was in accord with the anti-colonial flow of history,” Falk said.

Practically, this means that, often, the militarily weaker side, which may lose numerous military battles could ultimately win the war. This was as true in the case of Vietnam in 1975 as it was in South Africa in 1994. It should also be true in the case of Palestine.

This is precisely why pro-Israeli politicians, media pundits and organizations are fuming in response to the ALP’s recognition of Palestine. Among the numerous angry responses, the most expressive is the position of Michael Danby. He was quoted by the Australian Jewish News website as saying that ALP leaders Anthony Albanese and Richard Marles have done more than adopt the pro-Palestinian position of former British Labor leader Jeremy Corbyn by also adopting, “his Stalinist methods by suppressing debate on the foreign policy motions.”

Israel and its supporters fully understand the significance of Falk’s “legitimacy war.” Indeed, Israel’s military superiority and complete dominance over occupied Palestinians may allow it to sustain its military occupation on the ground a while longer, but it does very little to advance its moral position, reputation and legitimacy.

The fact that the ALP’s position advocates a two-state solution — which is neither just nor practical — should not detract from the fact that the recognition of Palestine is still a stance that can be utilized in the Palestinian quest for legitimizing their struggle and delegitimizing Israel’s apartheid.

Indeed, Israel’s military superiority and complete dominance over occupied Palestinians may allow it to sustain its military occupation on the ground a while longer, but it does very little to advance its moral position, reputation and legitimacy

Falk’s theory on “substantive politics” and “symbolic politics” applies here, too. While calling for defunct two-states is part of the substantive politics that is necessitated by international consensus, the symbolism of recognizing Palestine is a crucial step in dismantling Israel’s monopoly over the agenda of the West’s political elites. It is an outright defeat of the efforts of pro-Israeli lobbies.

Politicians, anywhere, cannot possibly win the legitimacy war for Palestinians, or any other oppressed nation. It is the responsibility of the Palestinians and their supporters to impose their moral agenda on the often self-serving politicians so that the symbolic politics may someday become substantive. The ALP recognition of Palestine is, for now, mere symbolism. If utilized correctly, through pressure, advocacy and mobilization, it could turn into something meaningful in the future.  This is not the responsibility of Labor, but of Palestinians themselves.