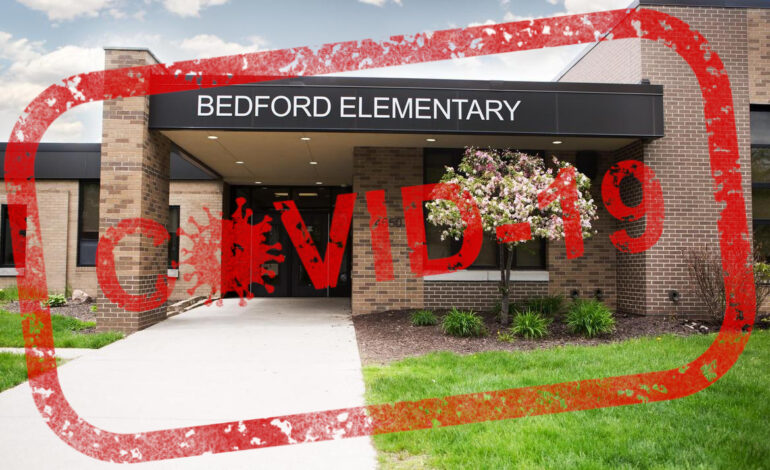 Bedford Elementary has seven classrooms under quarantine due to COVID-19.

DEARBORN HEIGHTS — During reports from the superintendent, the D7 School Board heard the state of the district with the rising COVID-19 cases.

“We are about a week and a half past spring break and, as we expected, following spring break when students were at home for that week, we had assumed we would come back to a rise in cases in the district, which has occurred,” Superintendent Jennifer Mast said. “We have seen a rise in cases over both of the weeks, the first week and moving into the second week. As of this morning, there are 26 positive students in the district.”

Mast said that all 26 cases were traced outside of the district, meaning there is no evidence that the students contracted the virus in the schools.

“None of the transmissions were in the schools, which we are glad to report,” she said. “That does mean that our safety protocols are working. The measures that staff, whether it be the teaching staff, the administrative staff, the cleaning staff, everyone is doing their part to keep our students safe and to keep transmission from happening inside of our schools. We are very very proud of that.”

Despite 26 confirmed positive cases, 303 students returned to virtual learning due to being quarantined.

“The unfortunate part about having positive cases in the schools is that the close contact window includes 48 hours prior to the positive test,” Mast said. “So the quarantines are many. The cases are not as high as some districts, but the quarantines are many. The rule for close contact quarantines is that if a student is within six feet for 15 or more consecutive minutes, they are considered a close contact within 48 hours of the positive test or the onset of symptoms. So as you can imagine, in an elementary classroom, those students are moving around with one another quite frequently. In the high school and middle school we have better control over keeping students in one spot and knowing exactly who they’re around, but the elementary rooms are much more flexible than that.”

Mast said that as a result, when there’s a positive case in the elementary classroom, the entire classroom is quarantined.

Mast said that some parents have asked why the entire school isn’t closed in that scenario.

“Once we have a positive case and we quarantine those students, the person who’s positive and anyone who’s positively been exposed is removed from the classroom setting,” she said. “The students are still virtually learning from home, their teacher switches to virtual instruction and the teachers are still reporting to the building to give that instruction from the classroom at the school. It doesn’t change anything for our staff. The staff that are in situations where their class has been quarantined have been vaccinated. The classes that remain in the building have not been exposed. There is no danger of them becoming exposed.”

With the return from spring break, Mast said she is confident they are just “riding the wave” and that the district is doing everything according to state guidelines to ensure students’ safety.

“We are taking all the precautions necessary at the schools and we know that they are working because we are not seeing any transmissions in the schools,” she said. “I stand by my recommendation that we are doing what is best for all of our families. Our families that are learning virtual are still doing virtual from home. Our families that are wanting face-to-face are still able to come unless quarantined. And our quarantined families are getting to tap into virtual or packet learning during that time that they have to be out of school.”

D7 is the only district in Dearborn and Dearborn Heights that has not spent a majority of the school year in a virtual environment as it has allowed parents to choose how they want their students to learn since the beginning of the school year.