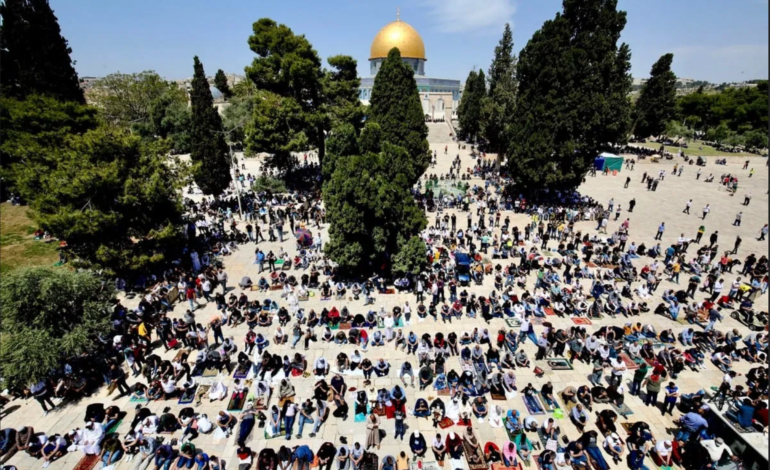 Muslims perform the first Friday prayer of the holy fasting month of Ramadan at the Al-Aqsa Mosque compound in Jerusalem on April 16. Photo: Anadolu Agency

Palestinians COVID-19 cases, especially in Gaza, have reached record highs, largely due to the arrival of a greatly contagious coronavirus variant, which was first identified in Britain.

Gaza has always been vulnerable to the deadly pandemic. Under a hermetic Israeli blockade since 2006, the densely populated Gaza Strip lacks basic services like clean water, electricity or minimally-equipped hospitals. Therefore, long before COVID-19 ravaged many parts of the world, Palestinians in Gaza were dying as a result of easily treatable diseases such as diarrhea, salmonella and typhoid fever.

Needless to say, Gaza’s cancer patients have little fighting chance, as the besieged Strip is left without many life-saving medications. Many Palestinian cancer patients continue to cling to the hope that Israel’s military authorities will allow them access to the better equipped Palestinian West Bank hospitals. Alas, quite often, death arrives before the long-awaited Israeli permit does.

The tragedy in Gaza — in fact in all of occupied Palestine — is long and painful. Still, it ought not to be classified as another sad occasion that invokes much despair but little action.

The holy month of Ramadan visits the Muslim Ummah while its tragedies are still festering — new conflicts, unfinished wars, an ever-expanding death toll and a never-ending stream of refugees

In fact, the struggle of the Palestinians is integral to a larger struggle for fundamental human rights that can be witnessed throughout the Middle East, which, according to a recent Carnegie Corporation report, is one of the most economically unequal regions in the world.

From war-torn Libya to war-torn Syria, to Yemen, Iraq, Somalia, Sudan, Afghanistan and many parts of the Arab and Muslim world, the dual tragedy of war and want is a scathing reminder of the price ordinary people pay for frivolous power struggles that yield nothing but more uncertainty and achieve nothing but more hatred.

Once more, the holy month of Ramadan visits the Muslim Ummah while its tragedies are still festering — new conflicts, unfinished wars, an ever-expanding death toll and a never-ending stream of refugees. Sadly, not even Ramadan, a month associated with peace, mercy and unity, is enough to bring about however fleeting moments of tranquility, or a respite from hunger and war for numerous Muslim communities around the world. In Palestine, the Israeli occupation often takes even more sinister turns during this month, as if to intentionally compound the suffering felt by Palestinians. On April 14, Sheikh Muhammad Hussein, the grand mufti of Jerusalem and preacher of the Al-Aqsa Mosque, called on Arabs and Muslims to intervene so that Israel may cease its harassment of Palestinians at the holy shrines of Al Quds — occupied East Jerusalem.

Aside from the increased attacks by Jewish extremists, who are now storming the Al-Aqsa Mosque at a significantly higher rate than ever before, the Israeli occupation authorities have, “removed the doors of the Mosque’s minarets, cut the electrical wires of loudspeakers to prevent the Adhan (call to prayer) and seized (Ramadan) iftar meals, in addition to threatening to storm the Mosque on the final days of the holy month of Ramadan,” Sheikh Hussein said in a statement.

Israel fully comprehends the spiritual connection that Palestinians, whether Muslims or Christians, have to their religious symbols. For Muslims, this rapport is further accentuated during the holy month of Ramadan. Severing this connection is equal to breaking the collective spirit of the Palestinian people.

These are only a few examples of a multifaceted and deeply rooted tragedy felt by most Palestinians. Numerous similar stories, though of different political and spatial contexts, are communicated every day throughout the Muslim world. Yet, there is no meaningful discussion of a collective remedy, of a strategy, of a thoughtful answer.

Ramadan is intended to be a time when Muslims are united on the basis of a wholly different criterion: Where political and ideological differences disappear in favor of spiritual unity, which is expressed in fasting, prayer, charity and kindness. Unfortunately, what we are witnessing is not Ramadan as it was intended to be, but different manifestations of the holy month, each catering to a different class — a painful but true expression of the disunity and inequality that have afflicted the Muslim Ummah.

There is the Ramadan of boundless wealth, finely catered iftar meals, coupled with endless, cheap entertainment. In this Ramadan, platitudes are often offered about charity and the poor, but little is delivered.

There is also the Ramadan of Palestine, Sudan and Yemen, of the Syrian refugee camps and of little dinghies dotting the Mediterranean, carrying thousands of desperate families, holding little but their hope of a better future beyond some horizon. For them, Ramadan is a stream of prayers that the world, especially their Muslim brethren, may come to their rescue. For them, there is little entertainment because there is no electricity and there are no massive iftar feasts because there is no money.

“Dua” is Arabic for supplication. For the oppressed, dua is the last resort; at times, even a weapon against oppression in all of its forms. This is why we often see bereaved Muslims raising their open palms to the sky whenever tragedy has befallen them. Ramadan is the month where the poor, destitute and oppressed raise their hands to Heaven, beseeching God in various accents and languages to hear their prayers.

They are reassured by such hadiths — sayings of the Prophet Mohammed — as this: “The supplications of three persons are never turned away: A fasting person until he breaks his fast, a just ruler and the supplication of the oppressed, which is raised by Allah above the clouds, the gates of Heaven are opened for it and the Lord says: By my might, I will help you in due time.”

There has never been a more critical time for the Ummah to work together, to heal its collective wound, to uplift its down-trodden, to care for its poor, to embrace its refugees and to fight for its oppressed. Many Muslim communities around the world are aching and their pain is unbearable. Perhaps this Ramadan can serve as the opportunity for social justice to be finally enacted and for the oppressed to be heard so that their hymn of torment and hope may rise above the clouds.