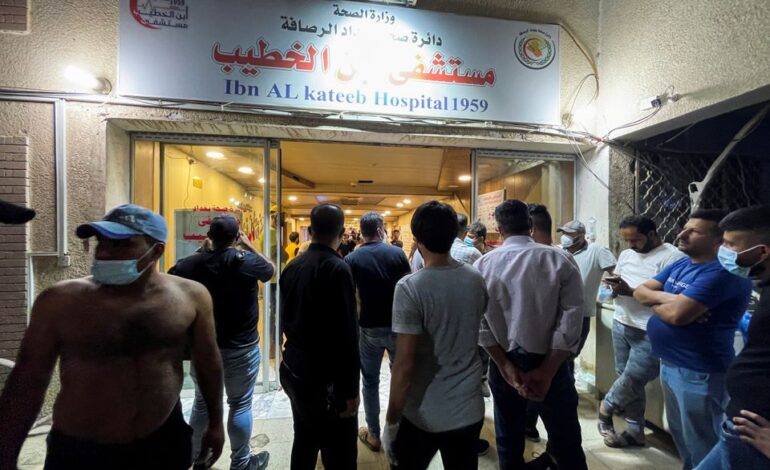 BAGHDAD — A fire caused by an oxygen tank explosion at a COVID-19 hospital, Ibn Khatib, has resulted in the death of at least 82 people and injured more than 100 more.

The explosion occurred on April 24.

Witnesses and authorities said that the blaze caused some people to jump from hospital windows.

Prime Minister Mustafa al-Kadhimi blamed negligence for the explosion and suspended Health Minister Hassan al-Tamimi as a result while an investigation is pending.

Interior Ministry spokesman Khalid al-Muhanna said that approximately 110 people were also injured and that most of the dead and injured were patients. Since the beginning of the pandemic, Iraq’s healthcare system has struggled to cope with the pandemic that has killed 15,257 and infected more than 1 million in the country.

Many of the surviving patients were moved to other hospitals.

With the ongoing investigation, findings are due by the beginning of next week and the governor of Baghdad and another senior health ministry official were also suspended.

“Such an incident is evidence of negligence,” the prime minister said in a statement. “Therefore, I directed that an investigation be launched immediately.”

He later added that the hospital’s manager and heads of security and maintenance had also been detained.

Dr. Sabah Samer was among the first to go towards the burning hospital to help.

“The fire spread so quickly because of the combustible oxygen cylinders,” Samer said. “The walls of the rooms were padded with plastic and nylon, which fed the fire.” Samer also said that he remembers the cylinders exploding one after another for almost every minute that he was inside, with flames shooting through the hospital windows and that he counted at least 20 explosions.

Reports also said that the emergency exits may have been shut and that fire extinguishers were not working.

Kamal al-Rubaie, a doctor at the hospital, was on the second floor in the ICU ward when the fire started.

He said that he had concerns about the oxygen cylinders ever since his first rotation at the ward last October, as each room inside the respiratory care unit typically stored more than a dozen cylinders, with each patient needing between two or three a day and 20 patients in the unit at the time.

Al-Rubaiesaid that he didn’t remember seeing a heat source, but oxygen can only strengthen a fire that is already burning.

Maj. Gen. Khalid Bohan, the head of Iraq’s civil defense, recalled many letters sent to various ministries over the year, urging them to install or update safety systems, in which he was told “there was no financial allocations.”

“A smoke detector and a fire system must be in place and hospital administrators bear this responsibility,” he told Iraqi state TV after the fire.