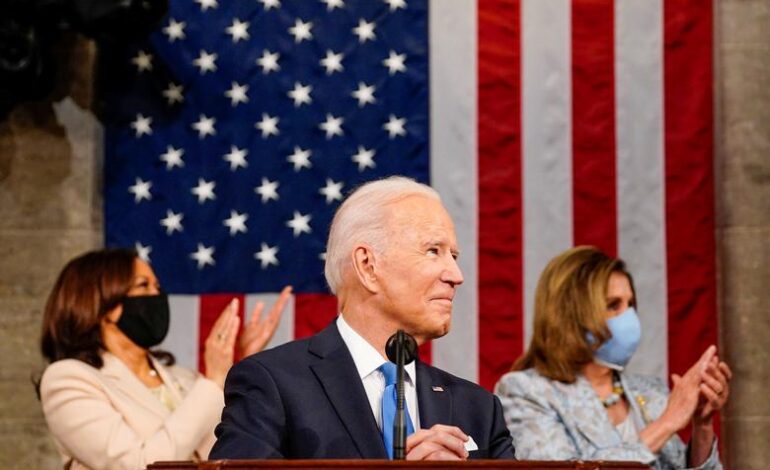 President Biden addresses a joint session of Congress, with Vice President Kamala Harris and House Speaker Nancy Pelosi on the dais behind him. Photo: Melina Mara/Reuters

WASHINGTON, D.C. — President Biden marked his first 100 days in office on Thursday, a day after giving his first speech to a joint session of the U.S. Congress.

The first 100 days have been marked by significant moves, many to dismantle policies enacted by former President Trump.

Significant among those are the delivery of 200 million shots of COVID-19 vaccines, meaning his administration doubled and surpassed its initial goal of 100 million vaccine doses in 100 days, reaching the 200 million benchmark on April 21.

A slew of executive orders in the early days of Biden’s presidency have primarily attempted to tackle the pandemic and dismantle Trump’s policies, like the Muslim and African travel ban.

A major legislative achievement for Biden has been the a $1.9 trillion pandemic stimulus plan, which passed without a Republican vote.

But Biden’s administration has still to find a better solution to the crisis at the southern border, with families still detained in crowded, inhumane conditions as the pandemic continues to be a reality.

In his first speech to Congress, Biden made a plea, especially to Republicans, to raise taxes on corporations and rich Americans to help pay for his sweeping $1.8 trillion “American Families Plan.”

Biden spoke to a group of about 200 Democratic and Republican lawmakers, other officials and guests, a scaled back event due to pandemic restrictions. Biden appeared in the chamber at an event scaled back this year because of the pandemic, with a small, specially selected group of Democratic and Republican lawmakers arrayed before him. Photo: Chip Somodevilla/Reuters

Biden also talked of his jobs and infrastructure plan, which was introduced earlier in the month. The American Families Plan and the infrastructure and jobs plan together total $4 trillion.

To pay for the plans, Biden has proposed an overhaul of the U.S. tax system, including raising the top marginal tax rate for the wealthiest Americans to 39.6 percent from its current 37 percent.

Biden has proposed nearly doubling the tax on investment income – known as capital gains – for Americans who earn more than $1 million. The $2 trillion-plus infrastructure plan is funded by an increase in corporate taxes.

Biden’s plan includes $1 trillion in spending on education and childcare over 10 years and $800 billion in tax credits aimed at middle- and low-income families. It also includes $200 billion for free, universal preschool and $109 billion for free community college regardless of income for two years.

U.S. Representative Jamaal Bowman (D-NY), a liberal Democrat, said Biden’s proposal are important, “but don’t go as big as we’d truly need in order to solve the crisis of jobs, climate and care”, while House Minority Leader Kevin McCarthy (R-CA) tweeted “this whole thing could have just been an email.”

Biden said the spending plans were needed to keep up with China, which he and his administration sees as a major strategic challenger. The country is seen by both parties as a threat to American economic interests.

Biden also urged Congress to pass a police reform bill in the name of George Floyd. The “George Floyd Justice in Policing Act” aims to put a stop to aggressive law enforcement tactics, but the measure had not yet been considered by the Senate.