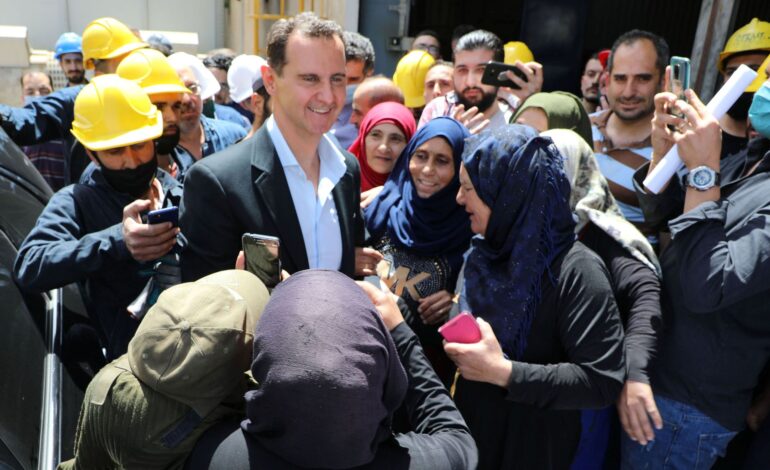 Syrian President Bashar al-Assad meets with people during his visit to some factories and facilities in the industrial city of Hassia in Homs, Syria, in this handout picture released on May 3. Photo: SANA via Reuters

DAMASCUS — On Monday, Syria’s higher constitutional court selected two obscure figures to appear on ballots standing against President Bashar al-Assad in a May 26 election, which the West rejects as a farce that will hurt diplomatic efforts to end the civil war.

Assad, who took power in 2000 on the death of his father, who ruled for 30 years, has regained control of most of his country after 10 years of civil war that killed hundreds of thousands of Syrians and drove more than half the population from their homes.

Damascus views the election, for what would be Assad’s fourth seven-year term, as the governing system functioning normally despite the war. The opposition and Western countries view it as a farce to keep Assad in power indefinitely and head off negotiations to end the conflict.

Top U.N. officials said this month said the vote would not fulfill Security Council resolutions, which call for a political process to end Syria’s conflict, a new constitution and free elections administered under U.N. supervision.

Assad has taken measures in recent months to ease public dissatisfaction fed by anger over eroding living conditions and a plunging currency, including raising state salaries, cracking down on currency speculators and bringing the official exchange rate closer into line with the black market.

His opponents say some of the new measures, such as cheap loans, favor his politically and economically powerful allies, including members of his Alawite minority sect who dominate the state and security forces.

On Sunday, Assad issued an amnesty, waiving penalties on some draft dodgers, currency speculators, smugglers and petty criminals, which relatives hope could lead to the release of some civic activists detained in recent months.