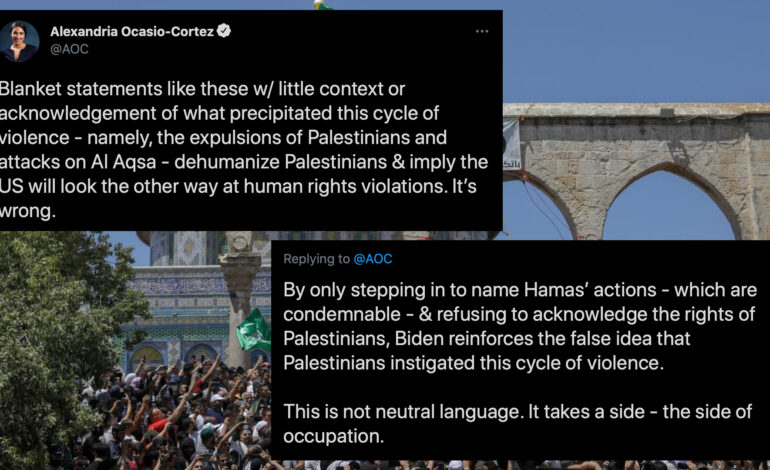 A tweet by U.S. Rep. Alexandria Ocasio-Cortez in reference to President Biden's affirmation of support for Israel's "right to defend itself", on Wednesday, May 12

WASHINGTON, D.C. — The latest escalation of Israeli violence against Palestinians has seen mixed reactions in the Washington D.C. political world.

Staunch supporters of Israel on the Republican side made predictable appeals to Israel’s security.

“Here in Washington, street protesters screamed — listen to this — ‘Israel is a terrorist state,'” said Senate Minority Leader Mitch McConnell (R-KY) of nationwide protests against Israeli ethnic cleansing campaigns in occupied East Jerusalem and bombardments of Gaza. “Some members of Congress echoed that rhetoric almost exactly. Look, the state of Israel has every right of self-defense.”

But within the Democratic Party a rift has appeared, with certain prominent members displaying outrage over Israel’s settlement projects to forcefully evict Palestinians from their homes in occupied East Jerusalem and its attacks on the Al-Aqsa mosque compound during the holy month of Ramadan, while others emphasize Israel’s right to self defense through major bombardment of Gaza after Hamas’ comparatively small initial retaliatory rocket attacks. Over the week, as bombing leveled high rises in Gaza, dozens of Palestinians were killed, including women and children, and Palestinians were attacked by violent right-wing mobs in Israel, the Biden administration repeatedly asserted its support for Netanyahu’s right-wing government, repeating the statement “Israel has the right to defend itself”, while not mentioning the events that led to present crisis.

Those sentiments were conveyed through phone calls between National Security Adviser Jake Sullivan and his Israeli counterpart, U.S. Secretary of State Antony Blinken, with Israeli Prime Minister Benjamin Netanyahu. Biden himself has also had a phone call with the Israeli prime minister, who faces corruption charges in his country.

But other voices, including on the so-called progressive end of the Democratic spectrum, pointed to the event at the center of the escalations in the region, namely the imminent expulsions of Palestinians from their homes in the Sheikh Jarrah neighborhood, Israel’s violent crackdown on protests over those removals and the multiple sieges of the holy Al-Aqsa mosque and attacks on Muslims observers there.

The Biden administration saw criticism from some of those progressive firebrands for its lack of acknowledgment of illegal Israeli settlement projects and Israel’s occupation of Palestine, bringing those points into the mainstream of the public conversation on the subject.

On Thursday, U.S. Rep. Alexandria Ocasio-Cortez (D-NY) criticized Biden for not acknowledging the role of Israel in escalating the violence, after he told reporters that he spoke with Netanyahu, saying “Israel has a right to defend itself when you have thousands of rockets flying into your territory.”

“Blanket statements like these w/ little context or acknowledgement of what precipitated this cycle of violence — namely, the expulsions of Palestinians and attacks on Al Aqsa — dehumanize Palestinians & imply the U.S. will look the other way at human rights violations,” Ocasio-Cortez said in Twitter thread. “It’s wrong. By only stepping in to name Hamas’ actions — which are condemnable — & refusing to acknowledge the rights of Palestinians, Biden reinforces the false idea that Palestinians instigated this cycle of violence. This is not neutral language. It takes a side — the side of occupation.”

A Vox analysis on Thursday showed Congressional Democrats were more willing to criticize Israel than Biden himself, a president who had previously promised to put human rights at the “center” of his foreign policy.

“It is splitting the party,” a Democratic Senate staffer told Vox reporter Alex Ward. “It’s splitting between those who think support for human rights includes Palestinians and those who don’t.”

There have been obvious criticisms of Israel’s aggression and the White House’s silence from Washington lawmakers like U.S. Reps. Rashida Tlaib (D-Detroit) and Ilhan Omar (D-MN).

Tlaib shared a video of an Israeli mob breaking into a Palestinian family’s home in Haifa, with a plea to Biden:

“If you’re having trouble finding the courage to speak up against Israel’s actions and stop supporting this inhumane violence, try imagining that this family isn’t Palestinian. Maybe then they’ll deserve human rights?”

But there have been others in the Democratic party’s moderate wing, like U.S. Sen. Chris Coons (D-DE), who has proclaimed himself to be one of Israel’s most staunch supporters in Congress, who denounced both Hamas’ rockets and Israel’s attempted removal of Palestinians from their homes.

“I condemn the ongoing violence in Jerusalem, the sacred home of Jews, Muslims and Christians alike, and especially Hamas’ recent attacks on the holy city,” he tweeted, adding, “I also remain concerned about evictions in East Jerusalem, settlement expansion and home demolitions, unilateral actions that place a two-state solution further out of reach.”

U.S. Rep. Jerry Nadler (D-NY), a Jewish lawmaker, said, “I remain deeply concerned by the violence in Jerusalem, including Israeli police violence, and I urge all parties to exercise restraints.”

The letter to Blinken referred to Israel’s plans to displace 12 Palestinian families out of their homes in Sheikh Jarrah and its plans to demolish Palestinian properties in Al-Bustan, home to 1,550 Palestinians, to make way for a Biblical theme park. It also referred to the decades-long demolition and displacement campaigns carried out by Israel, Israel’s “military occupation” and “illegal incorporation” of East Jerusalem, saying that as an occupying power, Israel was obligated to abide by the terms of the Fourth Geneva Convention.

The forced displacement of Palestinian families in #SheikhJarrah is a blatant human rights violation.

I was proud to lead an effort with @repmarkpocan to call on @SecBlinken to exert diplomatic pressure on Israel to halt these evictions.

“Israel’s plans to demolish Palestinian homes in Al-Bustan and to evict Palestinians from their homes in Sheikh Jarrah are in clear violation of the Fourth Geneva Convention,” the letter said.

One of the demands of the letter was to investigate whether U.S. weapons were used in past demolitions, possibly in violation of the Arms Export Control Act.

The letter saw 24 signatories, including Tlaib, Omar and Ocasio-Cortez, but also some not known for their criticism of Israel. U.S. Rep. Debbie Dingell (D-Dearborn) was one of the signatories.

“These aggressive tactics across the region, provoked further by a raid on peaceful protesters at the al-Aqsa Mosque and continued efforts to force Palestinians from their homes in Sheikh Jarrah, are immoral human rights violations and further drive a wedge into efforts for long-term peace,” Dingell said in a statement on Wednesday, also calling for an end to Hamas’ rocket attacks.

Other Metro Detroit representatives did not sign on to the letter, including U.S. Rep. Brenda Lawrence (D-Southfield), who instead tweeted that Israel had the “right to protect itself and all innocent civilians from the barrage of rocket fire coming from Hamas. Israelis and Palestinians deserve peace, security and stability.”

One constituent in Lawrence’s district responded:

“Hi Congresswoman, I’m a Black and Jewish constituent in your district. This tired, boilerplate, status-quo rhetoric is profoundly insufficient and not real leadership on this issue. Israel is conducting apartheid and ethnic cleansing. Please find the courage to tell the truth.”

On Wednesday, U.S. Senator Gary Peters (D-Michigan) made a statement on “Hamas’ rocket attacks on Israel,” saying, “Hamas’ indiscriminate firing of hundred of rockets on civilians is completely unacceptable — these attacks are particularly unconscionable as Muslims mark Eid El-Fitr and the end of Ramadan.”

“Your post is not only an insult to our community in Michigan, who has given you more than 70 percent of their votes last November and contributed to your slim victory, but it is a bigger insult to the truth, the principles of human rights and justice,” Siblani said. ” First: The ‘indiscriminate’ rockets of Hamas didn’t kill or injure more than the Israeli ‘precision’ U.S.-made rockets that bombed Gaza. At least 30 Palestinians, including 10 children, and three Israelis were killed as tensions in Jerusalem spread west toward the seacoast Tuesday.

“Second: Since you have given Israel, the occupier and the oppressor, the right to defend herself, do you think, sir, that the Palestinians have the same right?!… Very, very disappointing post, Senator.”

On Thursday evening, with the death toll from Israeli airstrikes reaching more than 100 Palestinians, including 27 children and 11 women, and scores injured, several Democrats took to the house floor to admonish Biden’s unwillingness to speak for Palestinian human rights. Many made impassioned speeches.

Omar called Netanyahu an “ethno-nationalist” on the floor of the House, while U.S. Rep. Betty McCollum (D-MN), who chairs the Appropriations Committee, which funds Israel’s Iron Dome missile defense system, said there is no diplomatic effort to end the occupation because Israel just wants to steal Palestinian land.

U.S. Rep. Ayanna Pressley (D-MA) compared Israel’s attacks on Al Aqsa to the use of nooses to terrorize Black Americans.

Wearing a keffiyeh and often back tears, Tlaib said there was no recognition of Palestinians’ humanity.

“If our own State Department can’t even bring itself to acknowledge the killing of Palestinian children is wrong. Well, I will say it for the millions of Americans who stand with me against the killing of innocent children, no matter their ethnicity, or faith,” Tlaib said, adding, “To read the statements from President Biden, Secretary Blinken, General Austin and leaders of both parties, you’d hardly know Palestinians existed at all.”

U.S. Secretary of Defense Lloyd Austin had earlier reiterated a supportive message in a phone call with his Israeli counterpart, Benny Gantz, with the Pentagon saying:

“Secretary Austin conveyed the Department’s ironclad support for Israel’s legitimate right to defend itself and its people, and he strongly condemned the launching of rockets by Hamas and other terrorist groups that targeted Israeli civilians.”