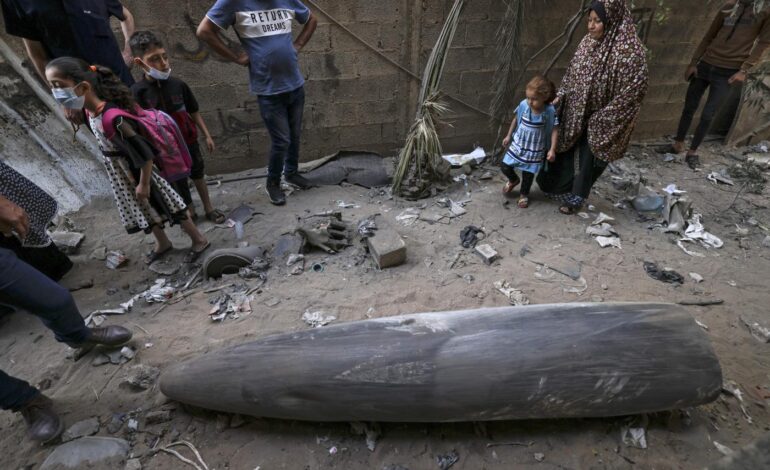 Palestinians look at an unexploded bomb dropped by an Israeli F-16 warplane on Gaza City's Rimal neighborhood on May 18. Photo: Mahmud Hams/AFP via MEE

On Wednesday, Democratic U.S. lawmakers introduced a resolution seeking to block a $735 million sale of precision-guided weapons to Israel, in a response to continuing devastating attacks on Palestinians by Israeli forces.

Since the fighting began on May 10, Palestinian health officials say 228 people have been killed in aerial bombardments that have worsened Gaza’s already dire humanitarian situation.

U.S. Reps. Alexandria Ocasio-Cortez (D-NY), Mark Pocan (D-WI) and Rashida Tlaib (D-Detroit) were lead sponsors of the measure, which has at least six other co-sponsors, including other progressive Democrats in the House.

They have been among lawmakers calling for a more concerted U.S. effort to end U.S.-backed and financed military assaults on Palestinians, along with expropriations of Palestinians from their homes, through forced removal and demolition, and repression of resistance from occupied Palestinians.

The Biden’s administration approved the potential sale of $735 million in weapons to Israel earlier this year, and sent it to the U.S. Congress for formal review on May 5, giving lawmakers 15 days to object under laws governing foreign weapons sales.

“At a time when so many, including President Biden, support a ceasefire, we should not be sending ‘direct attack’ weaponry to Prime Minister Netanyahu to prolong this violence,” Ocasio-Cortez said in a statement.

The resolution is unlikely to progress further in the House, where the office of Speaker Nancy Pelosi controls which legislation comes up for a vote. The chamber’s leaders have expressed support for the sale, with No. 2 Democrat Steny Hoyer telling reporters yesterday he backed it.

The sale of Joint Direct Attack Munitions, or JDAMs, made by Boeing, was considered routine at the time, before the start earlier this month of the fiercest hostilities in the region in years.

Both Republicans and Democrats in Congress generally express strong support for Israel. The country has been the largest recipient of U.S. foreign assistance since World War Two, with Washington currently providing Israel some $3.8 billion a year in military aid.

A senior Hamas official predicted a ceasefire within days even as Israel and Gaza militants pursued their cross-border attacks into an eleventh day on Thursday, with Israeli warplanes carrying out new airstrikes and Palestinians firing more rockets.

Biden urged Israeli Prime Minister Benjamin Netanyahu to seek a “de-escalation” on Wednesday, on the path to a ceasefire. An Egyptian security source said the sides had agreed in principle to a ceasefire after help from mediators but that details were still being negotiated in secret.

“I think that the ongoing efforts regarding the ceasefire will succeed,” the Hamas political official, Moussa Abu Marzouk, told Lebanon’s al-Mayadeen TV. “I expect a ceasefire to be reached within a day or two, and the ceasefire will be on the basis of mutual agreement.”

But the assault continued with both Israel and militants in Gaza voicing defiance.

Israel carried out over a dozen airstrikes on Gaza after midnight, including two that destroyed two houses in the enclave’s south. Medics said four people were wounded in an airstrike on the town of Khan Younis in southern Gaza.

Israel’s military said that early on Thursday its aircraft struck what it said was a “weapons storage unit” located in the Gaza City home of a Hamas official and “military infrastructure located in the residences” of other Hamas commanders, including in Khan Younis.

Rocket sirens blared early on Thursday in the southern Israeli town of Beersheba and in areas bordering Gaza. There were no immediate reports of casualties or damage.

Israeli authorities put the death toll to date at 12 in Israel, where repeated rocket attacks have caused panic and sent people rushing into shelters, according to Reuters.

The U.S. mission said it would not support a French push for a ceasefire resolution backed by other members of the 15-member U.N. Security Council, saying it believed such actions would “undermine efforts to de-escalate” violence.