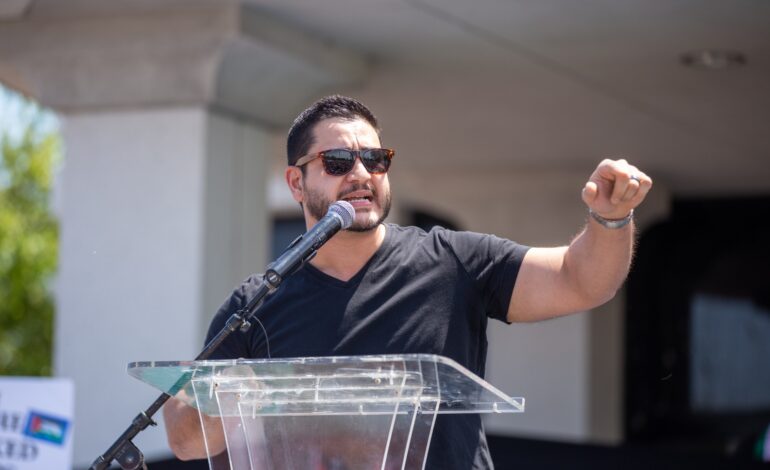 "American taxpayers are subsidizing the destruction of Gaza — financially, politically and morally," says Abdul El-Sayed in his latest essay about Palestine

— This essay, penned by Dr. Abdul El-Sayed, originally appeared in his newsletter The Incision on Thursday under the title “Gaza.” It has been edited for style.

In 2004, a couple childhood friends and I decided, like many 20-somethings, to spend the summer abroad. We headed to the Middle East, land of our forefathers. Our goals were simple: Spend time with distant relatives, brush up on our Arabic and explore the homes the younger versions of our mothers and fathers roamed themselves.

That first month we each, separately, visited our families and the second month we planned to regroup in Cairo and begin the adventure we’d signed up for. But it didn’t quite work that way.

See, two of my friends were Palestinian. To them, “visiting family” meant crossing the Egyptian border to Gaza. In the summer of 2004, the day before we were due to regroup back in Cairo, the Israeli government arbitrarily closed the Gaza border. My friends were left stranded.

For weeks, they camped out— living at risk from bombs overhead as the Israeli government conducted an all-out assault on Rafah, the Southern tip of the Gaza Strip. My friends sought refuge in their American passports, but were instead met with daily abuse by Israeli military and police. Their American citizenship meant nothing to Israeli authorities, trumped by their Palestinian ethnicity.

That year, 2004, the U.S. government sent $2.1 billion in military aid to Israel. Those billions funded the bombs that exploded over the heads of my friends — our government subsidizing the violence from which two of its own citizens could not escape. Palestinians stand near debris in the aftermath of an Israeli air strike in Gaza City, on May 19. – Photo by AFP

In the 17 years since, military aid to Israel has only grown. In 2019, $3.3 billion of our taxpayer dollars went to the Israeli military. Indeed, just this week, the Biden administration approved $735 million in sales of the very same weapons being used against Palestinians at this moment.

Since this year’s bombing began, 219 people in Gaza have been killed — including 63 children. More than 1,300 people have been injured. Thousands more have lost their homes and their livelihoods. And when its main COVID-19 testing facility was destroyed, Gaza lost several of its top doctors. This violence is an escalation of the provocations in Jerusalem I wrote about last week. All of that is an escalation of a decades-long illegal occupation of Palestinians, under which their homes have been targeted, their economies have been throttled, their children’s schools have been destroyed. And all of that… because they are Palestinian.

Israel claims that it has the right to “defend” itself — that all of this murder, destruction and violence is a justifiable response to Hamas. To be absolutely clear: I categorically condemn violence perpetrated on innocent people, no matter who perpetrates it, against whom it’s perpetrated, no matter where and no matter what the pretext. Period. Hamas is wrong. And its violent co-option of non-violent protest is part of the problem.

There is no justification for our tax dollars continuing to subsidize a foreign military that slaughters innocent children, underwrites human rights violations and violates international law

Taken together, it means there is no justification for our tax dollars continuing to subsidize a foreign military that slaughters innocent children, underwrites human rights violations and violates international law.

We Americans are often told that our tax dollars are being used to support the “Middle East’s only democracy.” But democracy is rooted in respect for the rule of law, the free flow of information and equal access to the ballot box. But Israel has been violating international law since at least 1967. Just last week, they knowingly bombed the offices of the Associated Press and Al Jazeera — a brazen attack on the freedom of the press. That after knowingly lying to the press to achieve a tactical advantage in their assault on Gaza. Additionally, there is the fact that occupied Palestinians do not have access to the ballot box at all. Decisions about Palestinian lives are made for them by a government captured by the very people attempting to displace them. What version of democracy are we supporting?

And where is the U.S.’ support for democracy anywhere else in the Middle East? Rather, our tax dollars are spent to oppose it. U.S. military aid supports Abdel-Fattah el-Sissi, the military autocrat who deposed Egypt’s democratically-elected president in a 2013 coup. U.S. military aid supports Saudi Arabia’s monarchy under Crown Prince Mohammed bin Salman, under whom Jamal Khashoggi, a journalist, was murdered and dismembered in Turkey. What democracy?

The Biden administration tells us that it’s carrying out “sensitive” diplomacy to bring an end to the bloodshed in Gaza. President Biden voiced support for a cease-fire in a call with Prime Minister Netanyahu earlier this week. And yet the U.S. has vetoed U.N. Security Council resolutions for a cease-fire three times.

We’ve been told that this is a “cycle of violence” that it’s been happening for “1000s of years” on “both sides” and that all of this is about “making the world safe for democracy.” Those words are used to normalize the violence and erase the asymmetry by which our money is being used to perpetuate an illegal occupation, forced displacement and targeted destruction of a group of people because of their ethnicity.

It’s time we pay attention to our role in this and demand an end to our complicity.