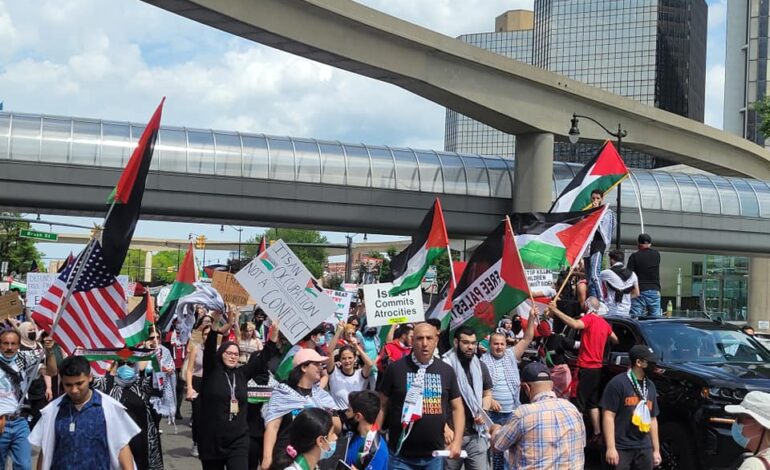 Some 1,000 protesters held a rally in downtown Detroit against the ongoing Israeli aggression on occupied Palestinians, one of two rallies held today (Photo: Rasha Almulaiki / The Arab American News

SOUTHEASTERN MI — Two “Free Palestine” rallies and marches were held last Sunday, May 23, by some 2,000 residents of Wayne and Macomb Counties at Warren City Hall and in Downtown Detroit. These are the latest in a series of protests held within the last two weeks as local resistance efforts continue to organize against the persistent onslaught of Israeli violence in occupied Palestine.

JVP has been supporting Palestinian efforts to end the occupation and a just and lasting peace based on principles of human rights, equality, justice and international law for all the people of Israel in Palestine — Barbara Barefield, Jewish Voices for Peace Detroit chapter organizer

Nearly 700 residents, activists and community organizations held a rally and march at Warren City Hall. The event was organized by the local chapter of the New Generation for Palestine (NGP) and Students for Justice in Palestine Wayne State University chapter. Speakers addressed the crowd on stage, including Islamic religious leaders, members of the Bangladeshi American Democratic Caucus and local Warren city and state officials.

“I think we are at a moment where we cannot afford to be silent, “ said Palestinian American and NGP member Huwaida Arraf. “Nobody can say with all the information out there, the media, access to social media… We can’t say we didn’t know. The United States is a critical pillar of Israel’s brutal repression of the Palestinians.”

Arraf is also a member of the National Lawyers Guild (NGL), North Macomb Democratic Club and the Macomb Democratic Party. She went on to address the crowd in an energetic rally call for building the momentum for Palestinian liberation.

“I think we’re breaking through. Without even inviting them, there are a couple of officials, local Warren city officials said that they support and endorse (us) and they want it to be here. So I think that’s a big win.”

“Biden was here last week, who has said the American government and his administration will give unwavering support to Israel,” Zahr said. “He has said as the Israeli army was murdering and massacring families in Gaza, that they were not overreacting. This is not a government that we are willing to stand for.

“This is our administration that came into our communities and said, ‘Please, please vote for us last November.’ And we did, didn’t we? They asked us to save democracy from Donald Trump and now we ask them to save Palestine from Joe Biden.”

“We need to be on the right side of human rights,” El-Sayed said. “I want to be clear about something. It’s not just in Israel. It’s also Saudi Arabia, where our government tax dollars have been funded to drive a civil war in Yemen. This is about justice. This is about human rights.

I want to say, in particular, to my Jewish sisters and brothers who are here today in solidarity for justice, thank you. Because we know that you are sick and tired of watching your beautiful faith, your beautiful culture, used to justify state sponsored oppression of another people. We thank you for that.”

Barbara Barefield, local organizer with the Jewish Voices for Peace Detroit chapter, spoke to the demonstrators, addressing the continued support and responsibility of the Jewish community to stand with the Palestinians’ right for peace and sovereignty.

“I am bringing a message of solidarity from Jewish Voices for Peace,” Barefield said. “JVP has been supporting Palestinian efforts to end the occupation and a just and lasting peace based on principles of human rights, equality, justice and international law for all the people of Israel in Palestine.

“This message is resonating across the country, more than 500,000 people of online supporters and 85 Jewish Voices for Peace chapters around the country. This is really good news that Jewish people are starting to pay attention and learn the real history to go beyond the myth that we were taught as children that Israel was a land with no people and that Jewish people were a people with no land.”

The crowd marched up and down Van Dyke Ave, chanting loudly in front of local commuters driving on the busy road. A couple of counter protesters were seen on the sidewalk waving Israeli flags.

DOWNTOWN DETROIT: Some 1,000 protesters gather and march in front of Hart Plaza

About a week ago, something triggered with everything that’s going on with Palestine. So I wanted myself, along with everyone else out here, to say today that the people of Palestine have not been forgotten. We aren’t turning our backs on them— Zeina Sobh, Dearborn resident and rally organizer

Dearborn resident Zeina Sobh organized a pro-Palestinian protest with local activists, drawing a crowd of some 1,000 people. The crowd gathered for a rally in front of the Spirit of Detroit landmark on Woodward Ave. and E. Jefferson Ave.

A Lebanese Muslim American, Sobh said this was her first time organizing a protest. She was fueled by the flare up of injustices happening in occupied Palestine and felt the need to mobilize.

“We’ve built up to this point, right? We’ve a lot of injustices to all kinds of people, immigrants, our Black brothers and sisters, I can go on and on. About a week ago, something triggered with everything that’s going on with Palestine. So I wanted myself, along with everyone else out here, to say today that the people of Palestine have not been forgotten. We aren’t turning our backs on them.”

Shayma Ghaleb, a Yemeni American and activist from Dearborn, and others roused the crowd in a series of chants. She was joined by other diverse members of the crowd on the microphone, sharing personal stories and vows of solidarity for the people of Palestine.

Lavish, an activist from Minneapolis, MN, recently traveled to Detroit to support Sobh in organizing the event. He was involved in organizing actions back home in support of Black Lives Matter movements, including those onset by the internationally publicized local murder of George Floyd by police and the subsequent trial and conviction of former police officer Derek Chauvin.

When asked what brought him out here, Lavish said, “Injustice. Standing up for Palestine, our brothers and sisters across the other side of the world that are ethnically cleansed and bombed every day.”

The protesters marched down the Detroit Riverwalk at Hart Plaza, heading north before turning down Beaubien St. and onto East Jefferson. They followed the police escort onto Randolph St, before settling into a closing rally on the concrete median at Cadillac Square.