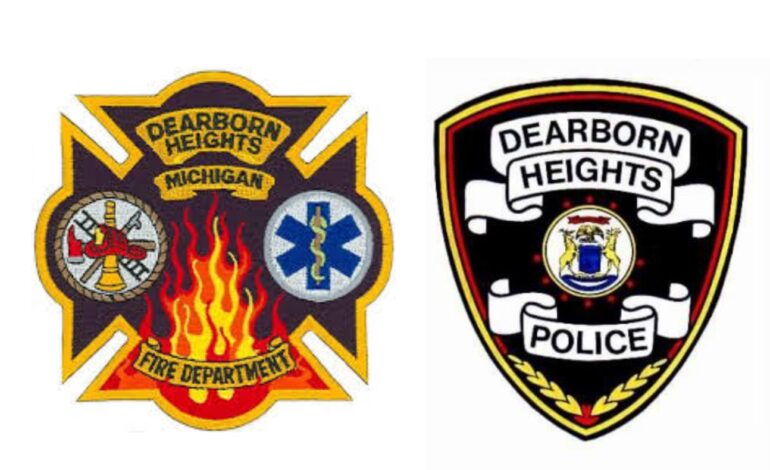 Firefighter John McLeay was selected as Dearborn Heights’ Firefighter of the Year.

McLeay, who has been with the department for six years, said he is humbled and honored.

“I’m extremely proud,” he said. “It’s a difficult thing to get and I have been trying to earn it my entire career. I was born and raised in Dearborn Heights. I love this city and I really care about this city; it’s my home.”

Chief Dave Brogan said that this is one of the toughest decisions he has to make every year. “Every year we allow everyone to nominate anyone they want, then we review the nominations and ultimately, I make the final decision,” he said. “It’s really very difficult because all of our firefighters do so much for the community.”

Brogan said that McLeay, who is involved with the Spirit Fest, the Goodfellows and the Salvation Army is always around.

“I’m very pleased with John being nominated,” he said. “He’s always around and helping. He’s got a very large personality, gregarious guy and he’s always making people laugh. People like to be around him and that goes a really long way.”

McLeay said that the entire department is one of the best in the state.

“Our whole department loves working for our city and we have really high morale,” he said. “I just do as much as I can as often as I can. This last year has been hard for everyone and I just like to be positive and make people laugh.

McLeay also said he had no idea that he had been selected and was very surprised.

“I thought I was in trouble at first,” he said. “But everyone seemed really proud of me and it was really an overwhelming moment. I like getting to know the community outside of just emergencies. I am extremely honored to have been selected and I will continue to maintain that level of performance, even without the title.”

For the police department, Sergeant Nick Szopko was named Police Officer of the Year.

Szopko is a 14-year veteran of the department, a graduate of Grand Valley State University and attended the Wayne County Regional Police Training Academy before joining the Riverview Police Department in 2006. Later that year, he found his home in the Dearborn Heights Police Department, where he has been since.

In 2014, Szopko was promoted to the rank of sergeant and continues to lead other officers in the department.

Before being promoted, Szopko had worked as a patrol officer, field training officer in the road patrol division, an investigator in the directed patrol unit and as the supervisor of the traffic bureau. He is currently assigned as one of the midnight shift road patrol supervisors.

Szopko has also been a member of the tactical response unit since 2010. He is currently the team leader and is also a part of the range staff as a rifle and taser instructor. In 2010, Szopko was the Police Officers’ Association of Michigan (POAM) Officer of the Year.

Chief Mark Meyers said that Szopko’s dedication, leadership and commitment to developing young officers to best serve the residents of Dearborn Heights will have a lasting impact for decades to come.

“Sergeant Szopko, like all of our officers, has dedicated his professional life to public safety,” he said. “Through his leadership, Sergeant Szopko has made a positive and lasting impact within our community and our police department. I am extremely proud of the work he has accomplished. We are better as an agency because of Sergeant Szopko.”

Meyers also told The Arab American News that Szopko asked to not be interviewed himself as he felt others should be recognized for their dedication as well.