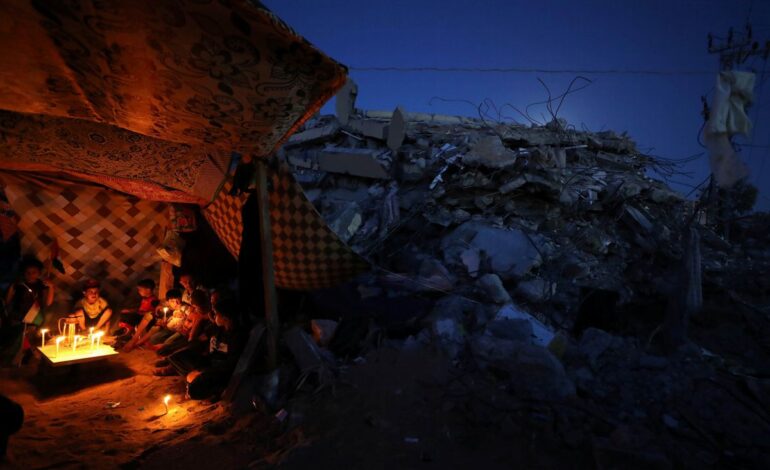 Palestinians from Zawaraa family sit near candles in a makeshift tent amid the rubble of their houses, which were destroyed by Israeli air strikes in Gaza, May 25. Photo: Mohammed Salem/Reuters

A Danish pension fund, which prides itself on being the world’s strictest on human rights violations, says it is considering adding Israel to a long list of countries it excludes following this month’s conflict with Palestinians.

The $22 billion Akademiker looks after the pensions of Denmark’s teachers and university lecturers and has received growing attention over the last year for ditching China’s government bonds and Saudi Arabia’s, following the murder of journalist Jamal Khashoggi.

It holds about 190 million Danish crowns worth ($31 million) of Israeli government and quasi-government bonds but has growing concerns — as it does about Russia, Qatar, Egypt and the United Arab Emirates, which are also not on its banned list.

“We are concerned about the human rights record (of Israel), but also have to acknowledge that our members are deeply divided on this topic,” the fund’s chief executive, Jens Munch Holst, told Reuters.

The U.N. Human Rights Council voted on Thursday to launch an international investigation into allegations of crimes committed in the 11 days of hostilities this month between Israel and the Hamas Islamist group in Gaza.

Michelle Bachelet, the U.N. high commissioner for human rights, told the council that deadly Israeli strikes on Gaza may constitute war crimes and that Hamas had violated international humanitarian law by firing rockets into Israel.

Israel rejected the resolution adopted by the Geneva forum and said it would not cooperate. Hamas, which governs Gaza, called the group’s actions “legitimate resistance.”

If the Danish fund opts to exclude Israel, it will join sovereign wealth funds in Norway and New Zealand in backing away from some Israel investments.

Norway’s fund said last week it had decided to exclude three companies from its fund, Honeys Holdings, Shapir Engineering and Industry and Mivne Real Estate, because of “unacceptable risks” that the firms contributed to systematic violations of human or individual rights.

The manager of the NZ Super Fund said in March it had excluded five Israeli-owned banks on responsible investment grounds.

Akademiker’s Holst said that as Palestinian authorities haven’t issued sovereign debt it was not “in scope” for potential exclusion.

Syria’s Assad wins fourth term with 95 percent of the vote, in election the West calls fraudulent