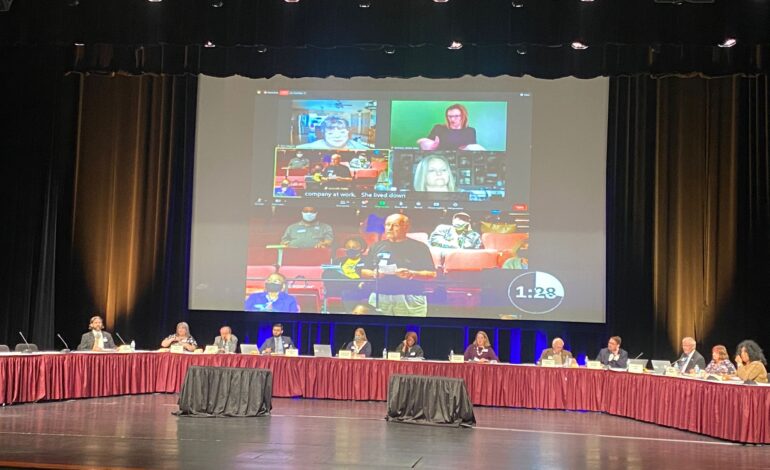 More than 150 residents from all over downriver attended the event to provide their input on the redistricting.

In 2018, Michigan voters approved the creation of the MICRC under Proposal 2. Its mission is to lead Michigan’s redistricting process to assure Congressional, State Senate and State House district lines are drawn fairly in a citizen-led, transparent process, while meeting constitutional mandates.

As the redistricting happens every 10 years following the census, this is the first time that the MICRC will be responsible for the state’s redistricting.

The commission is made up of four Democrats, four Republicans and five who identify with neither, or Independents from across the state who were chosen via a lottery.

Commissioner Anthony Eid is one of the Independents on the commission and is not only the youngest commissioner, but also the only one of Middle Eastern descent.

“Dearborn has the highest Middle Eastern populations outside of the Middle East itself,” he said. “There are a lot of first, second, third and even fourth-generation families here, but the community is not well represented in government because of the U.S. Census not really having a Middle Eastern option, meaning we all get classified as White.”

Eid said the event was for the community to finally let their voices be heard.

“Traditionally, the redistricting was done by state legislature, which was problematic because it allows for politicians to develop maps to benefit themselves, basically gerrymandering,” he said. “The MICRC takes that power back and puts it in the residents’ hands.”

Hammoud also said that Arab Americans have been fighting for their representation for decades. “As you might not know, cities like Dearborn, Dearborn Heights and Hamtramck are homes to the largest Arab American populations, but the census data that you review will not include them. If you don’t know, you’ll soon hear that the Arab American community has fought long and hard to get representation on the census. In what seemed like an instant, that decades-long fight was struck down on a whim. Now, federal protections, grants and research are held back to the reincarnation of this commission. I bring this up to the commission to shed light on the waves of impact this has on language accessibility. The 1965 Federal Voting Rights Act, one of the most significant landmarks of this democracy and our nation’s history, protects and provides non-English speaking communities with translated voter materials. It ensures that all citizens can participate in the democratic process, but because of the lack of representation on the census, there’s a huge gap in language accessibility. And these rights don’t apply to the Arabic-speaking populations; that limits the access to our rights and representations as citizens. This makes the Arab American community a community of interest. We have to recognize that there comes an artificial gap to access, and I ask this commission to seriously consider the egregious impact of dividing this community any further.”

“The work you are doing here today is critical to the future of our democracy,” he said. “Dearborn is one of the largest concentrations of Arab Americans outside of the Middle East and they deserve proper representation at the state and federal level. The U.S. Census does not take into account the ethnicity of Arab Americans living in the city. They are immigrants, native citizens and longtime contributors to the cultural fabric of our town with their perspectives. I am here to ask the commission to bring our city back together in our State House district, particularly the northeast end of Dearborn, which historically has been home to a large concentration of Arab Americans and other Dearbornites who are a part of the Dearborn community. I am here to ask the commission to reconsider the lines of our Senate district as well, which have been drawn in a manner of disenfranchising our community by splitting the wider communities of Dearborn and Dearborn Heights. It makes sense to incorporate our cities together to allow for a more holistic representation for both of our cities.”

The Arab American News Publisher Osama Siblani said that he believes Dearborn should be its own district. “I’m very familiar with gerrymandering,” he said. “Because I came from countries, most of us Arab Americans came from countries where laws are drawn and districts are drawn by the power, so I am very happy to see that we have an Independent Redistricting Commission that will look into the interests of the people. Starting from there, I would like to say to you that it doesn’t make sense, one of our previous speakers talked about three precincts in Dearborn that are put in District 9. That doesn’t make sense. These people do not have adequate representation in the House. Now, when it comes to the Senate, we have absolutely no representation as a community. We are a very vibrant community and yet we do not have representation. What we are asking for is the representation of Arab Americans. I am totally against segregation; we do not want to be separated from our brothers and sisters in Detroit and other surrounding cities, but we have a special need. We come from war-torn countries and our kids come traumatized. Our schools are different. We are the third-largest school district in the state and they need special needs and we need adequate representation in Lansing in order to meet these needs. Again, against segregation, but for adequate representation.”

Siblani told the commission that he submitted a map that shows where Arab Americans are concentrated. The map was submitted through New Michigan Media and Siblani said he hoped that it will be considered to empower the Arab American community.