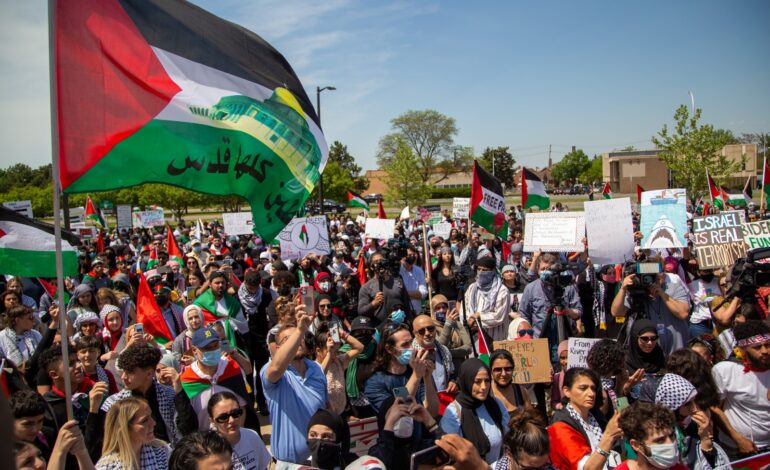 A rally for Palestine in Dearborn in May. Photo: Imad Mohamad/The Arab American News

WASHINGTON, D.C. — The American-Arab Anti-Discrimination Committee (ADC) is looking for a federal hearing and investigation into rising incidents of workplace discrimination against employees who have expressed solidarity with Palestine and against Israeli apartheid and occupation.

The ADC says it is responding to a surge of complaints it has received of discrimination aimed at silencing pro-Palestinian voices in the workplace. The organization has requested that the House Education and Labor Committee hold a hearing into the discriminatory practices happening across the country. In a letter to Chairman Bobby Scott (D-VA), the ADC highlighted the surge and offered assistance to the committee in further exploring and investigating the issue.

The ADC says it has received numerous calls involving employees being punished, either by being fired or disciplined, for posting or sharing pro-Palestinian sentiment on social media.

It says the cases follow a similar pattern: An employee is targeted by the employers, after outside pressure, and is disciplined or fired for posting or sharing pro-Palestinian posts on social media. It is aware of certain organizations and entities with the sole purpose of wrongful interference with the employee-employer relationship.

“The constant volume of cases is troubling and has taken over the entirety of our legal work,” the ADC said in a press release. “Our organization has been overwhelmed with the number of cases and are horrified with how individuals have been treated. ”

The ADC says individuals are having their personal information posted on the Internet by websites and social media accounts. In addition, people are contacting employees’ Human Resources department to falsely make accusations about them. Employees are being questioned about their national origin, their religion and whether they speak Arabic.

“Without action on the federal level to illuminate the issue, it is certain that the targeting of our community members will continue,” said Chris Habiby, ADC policy coordinator. “It is imperative that Congress takes seriously the discrimination and hate facing Palestine, Arabs and our allies.”

The ADC recommends people who have been targeted because of thteir pro-peace and pro-Palestine positions contact the ADC Legal Department at legal@adc.org.

“The influx of cases we have been experiencing is very troubling,” said Abed Ayoub, ADC legal and policy director. “These third-party entities with the sole purpose of wrongful interference with the employee/employer relationship must be held accountable.”