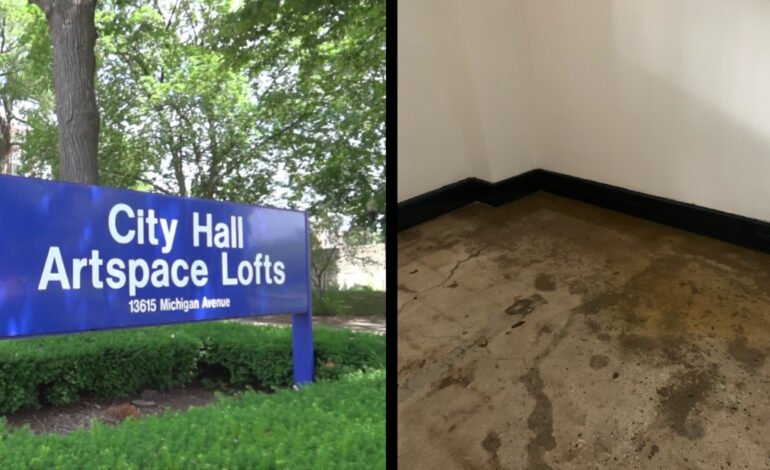 DEARBORN — Ever since his basement level apartment flooded last Friday night, Ramsey Turkmani, a tenant at Dearborn’s City Hall Artspace Lofts, has had no real help from his building’s management.

In fact, after almost an entire weekend of pleading with them to remove the continued water seeping into the apartment he shares with his wife and two pets, the building’s management company is now threatening to evict him.

Dearborn was affected badly by intense rainfall last Friday night, which overwhelmed the city’s stormwater drainage systems and backed up sewer lines, which then flooded basements all over the city and surrounding county. Many of those basements were flooded with unsanitary and dangerous sewage water.

The building, which boasts “affordable live/work space” units that support the area’s creative community, is managed by KMG Prestige. The landlord and owner of the 20,000 square foot building, which used to serve as the City Hall, is Artspace Projects, Inc. based out of Minneapolis.

Turkmani is a tattoo artist who runs 313ink in Dearborn. He has been a resident at the building for several years.

After receiving no word from management on removing the water from his apartment on Saturday, Turkmani went out looking for help in the building. He noticed building workers drying out the commercial spaces and draining the parking lot, even though no one had come to check on him and his first floor neighbors.

Turkmani found a shop vac in the hallway and went to work clearing out water in his apartment. But the water, which had seeped up through cracks in the floor, continued to come up, particularly in one corner of his bedroom. The water remained in that corner well into the week. Water around cracks in the flooring in Ramsey Turkmani’s apartment

Over the weekend, Turkmani was given a fan, bleach and pine-sol, though backup contamination cleaning requires specialized products. Mold can set into wet materials within 24 hours

The water had seeped into wood paneling along the entire apartment, and had created a foul sewage smell. The moisture level in his apartment was discernible, creating an unlivable environment. After Turkmani made multiple calls and emails requesting he be moved to a dry unit until the water was removed. Instead, management promised to send a contractor on Monday.

On Monday, a contractor, a building handyman and building manager Dawn Taylor came to inspect the apartment. Taylor informed Turkmani they did not detect the foul smell that the residents had reported.

“Since the flood occurred, they walked into my apartment for under a minute,” Turkmani told The Arab American News. “They looked at the wall in my bedroom because that’s where the puddle keeps reforming. They said they would fix just that wall, even though the wood paneling that runs against the walls all the way to the entrance shows clear signs of moisture.”

Over the weekend, Turkmani was given a fan, bleach and pine-sol, though backup contamination cleaning requires specialized products. Mold can set into wet materials within 24 hours. Turkmani and his wife weren’t able to wash their damaged clothes, as only one of the washing machines was operational for the entire section of the building and its tenants.

They said they took care of my unit, but I’ve been cleaning it myself — Ramsey Turkmani

After Monday’s inspection, Turkmani was told to remove all of his personal belongings and that smell could be emanating from them, even though management had earlier denied the smell. Turkmani, who is recovering from recent surgery, informed them that he was not able to immediately remove all of his belongings.

“They said they took care of my unit, but I’ve been cleaning it myself,” he said. “They gave me a fan and some cleaning products, after I asked for them. They didn’t even offer it.”

Turkmani provided The Arab American News email conversations between himself and Taylor. Taylor told Turkmani that management had “responded immediately and removed the water and dried out the spaces”, even though Turkmani had been removing the water over the weekend himself.

On Wednesday, Turkmani was told that “his home had dried”, that a crew would be sent to repair “a small area of wet drywall,” on July 7 and that he would not have access to his apartment for almost a week. He was told that his belongings were “contributing to further damage.”

Turkmani was also told that if he was “unwilling to clean or dispose of your wet, damaged personal items” and “unwilling to grant” contractors access to his apartment, his tenancy would be terminated.

“I never denied them access to my apartment,” Turkmani said on Thursday. “I’ve been begging them to come clean it for six days.”

Turkmani and his wife have been staying with a friend in the building on the third floor. He contacted a friend, City Council candidate Jon Akkari, who helped him remove many of his belongings and reached out to Councilwoman Erin Byrnes, who came by to inspect the building over the week. State Rep. Abdullah Hammoud (D-Dearborn), who had been organizing volunteer missions throughout the city, also offered to look further into the matter.

On Wednesday, Turkmani was offered a hotel room nearby or $250 in compensation to stay with friends and family while the work on his apartment was completed. He has been given till next week to clear out all of his damaged items.

KMG Prestige did not respond to a request for a comment by press time.