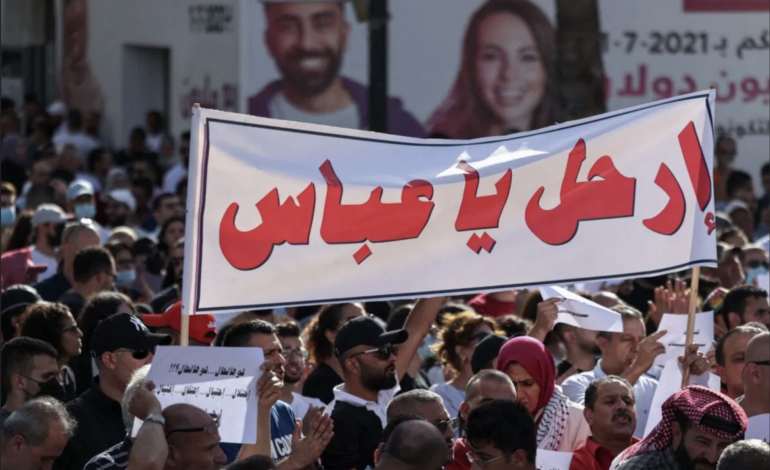 “The Palestinian Authority’s days are numbered.” This assertion has been oft repeated recently, especially after the torture to death on June 24 of a popular Palestinian activist, Nizar Banat, 42, at the hands of PA security goons in Hebron (Al-Khalil).

The killing — or “assassination” as some Palestinian rights groups describe it — of Banat, however, is commonplace. Torture in PA prisons is the modus operandi, through which Palestinian interrogators exact “confessions.” Palestinian political prisoners in PA custody are usually divided into two main groups: Activists who are suspected by Israel of being involved in anti-Israeli occupation activities and others who have been detained for voicing criticism of the PA’s corruption or subservience to Israel.

In a 2018 report by Human Rights Watch, the group spoke of “dozens of arrests”, carried out by the PA “for critical posts on social media platforms.” Banat fits perfectly into this category as he was one of the most persistent and outspoken activists, whose many videos and social media posts exposed and embarrassed the PA leadership of Mahmoud Abbas and his ruling Fatah party. Unlike others, Banat named names and called for severe measures against those who squander Palestinian public funds and betray the causes of the Palestinian people.

Banat had been arrested by PA police several times in the past. In May, gunmen attacked his home, using live bullets, stun grenades and tear gas. He blamed the attacks on Abbas’ Fatah party.

His last social media campaign was concerned with the almost-expired COVID-19 vaccinations, which the PA received from Israel on June 18. Because of public pressure by activists like Banat, the PA was forced to return the Israeli vaccines which, before then, were touted as a positive gesture by Israel’s new prime minister, Naftali Bennett. People attend the funeral of Palestinian critic Nizar Banat, who died after a brutal raid and arrest by Palestinians Authority’s security forces, in Hebron in the Israeli-occupied West Bank, June 25. Photo: Mussa Qawasma/Reuters

Arbitrary arrests, torture and suppression of peaceful protests are synonymous with PA security as numerous reports by rights groups, whether in Palestine or internationally, have indicated.

When the PA men descended on Banat’s house on June 24, the ferocity of their violence was unprecedented. His cousin, Ammar, spoke of how nearly 25 PA security personnel raided Banat’s house, pepper-sprayed him while in bed and “began beating him with iron bars and wooden batons.” After stripping him naked, they dragged him into a vehicle. An hour and a half later, the family learned the fate of their son through a WhatsApp group.

Despite initial denial, under pressure from thousands of protesters throughout the West Bank, the PA was forced to admit that Banat’s death was “unnatural.” The PA’s justice minister, Mohammed al-Shalaldeh, told Palestine TV that an initial medical report indicated that Banat was subjected to physical violence.

This supposed explosive revelation was meant to demonstrate that the PA is willing to examine and take responsibility for its action. However, this is simply untrue as, one, the PA has never taken responsibility for its past violence and, two, violence is the cornerstone of the PA’s very existence. Arbitrary arrests, torture and suppression of peaceful protests are synonymous with PA security as numerous reports by rights groups, whether in Palestine or internationally, have indicated.

So, is it true that “the Palestinian Authority’s days are numbered?” To consider this question, it is important to examine the rationale behind the PA’s very existence and also to compare that initial purpose to what has transpired in the following years.

The PA was founded in 1994 as a transitional national authority with the purpose of guiding the Palestinian people through the process of, ultimately, national liberation, following the “final status negotiations” set to conclude by the end of 1999. Many years have elapsed, since, without a single political achievement to the PA’s name. This does not mean that the PA, from the viewpoint of its leadership and Israel, has been a total failure, as the PA security continued to fulfill the most important role entrusted to it: Security coordination with the Israeli occupation, i.e. protecting illegal Jewish settlers in the West Bank and doing Israel’s dirty bidding in PA-run autonomous Palestinian areas. In exchange, the PA received billions of dollars from U.S.-led “donor countries” and from Palestinian taxes collected on its behalf by Israel.

That same paradigm is still at work, but for how much longer? Following the Palestinian revolt in May, the Palestinian people have exhibited unprecedented national unity and resolve that have transcended factional lines and have daringly called for the removal of Abbas from power, rightly linking the Israeli occupation with the PA’s corruption.

Since the mass protests in May, the PA’s official discourse has been marred by confusion, desperation and panic. PA leaders, including Abbas, tried to position themselves as revolutionary leaders. They spoke of “resistance”, “martyrs” and even “revolution”, while simultaneously renewing their commitment to the “peace process” and the American agenda in Palestine. It is important to note that no aspect of this Palestinian Authority enjoys an iota of democratic credentials. Indeed, on April 30, Abbas canceled the general election that was scheduled to be held in Palestine in May, based on flimsy excuses.

As Washington resumed its financial support of Abbas’ Authority after it was disrupted by former President Trump, the PA hoped to return to the status quo, that of relative stability, financial abundance and political relevance. The Palestinian people, however, seem to have moved on, as demonstrated in the mass protests — always met with violent response by PA security throughout the West Bank, including Ramallah, the seat of the PA’s power.

Even the slogans have changed. Following Banat’s murder, thousands of protesters in Ramallah, representing all strands of Palestinian society, called on Abbas, 85, to leave, referring to his security goons as “baltajieh” and “shabeha” — or thugs — terms borrowed from Arab protesters during the early years of various Middle Eastern revolts.

This change in discourse points to a critical shift in the relationship between ordinary Palestinians — emboldened and ready to stage a mass revolt against Israeli occupation and colonialism — and their quisling, corrupt and self-serving so-called leadership. It is important to note that no aspect of this Palestinian Authority enjoys an iota of democratic credentials. Indeed, on April 30, Abbas canceled the general election that was scheduled to be held in Palestine in May, based on flimsy excuses.

The PA has proven to be an obstacle in the face of Palestinian freedom, with no credibility among Palestinians. It clings on to power only because of U.S. and Israeli support. Whether this Authority’s days are numbered or not depends on whether the Palestinian people prove that their collective will is stronger than the PA and its benefactors. Historical experience has taught us that the Palestinian people will eventually prevail.