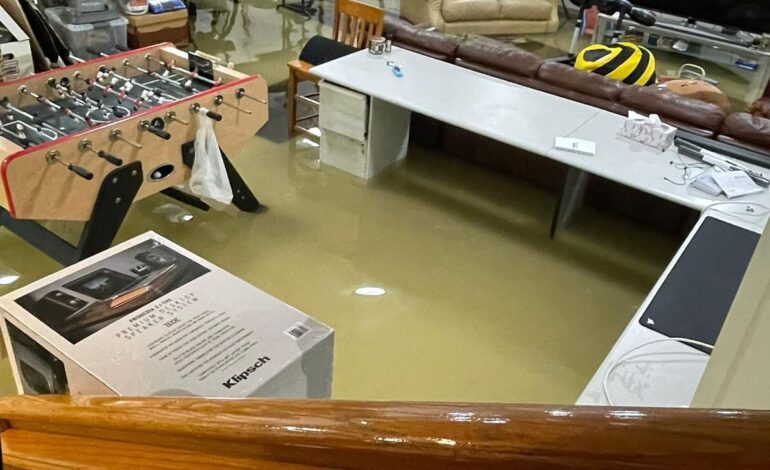 DEARBORN — The city government is reminding residents of a phone line for flooding-related business.

Residents can call the Dearborn Flood Response Call Center at 313-586-3181 to report flood damage to the city and get information on resources.

The deadline for residents affected by the storms of June 25-26 to report flood damage and their estimated losses to the the city is Monday, Aug. 9.

Residents affected by the storms can contact the call center to report flood damage as part of the process to eventually receive federal aid, and to ask about resources that might be available to assist in cleanup and recovery.

The form to report flood damage is at www.cityofdearborn.org/flood. It can also be accessed by texting FLOOD to 313-635-3900. An Arabic version is also available.

The city says residents should be documenting damage via photographs and video, and saving receipts for all cleanup and repair expenses.

The data gathered through the flood damage form will assist Dearborn with its application for federal emergency relief efforts, with the goal of bringing in federal relief dollars for households affected by the June 26 flooding. If a federal disaster is designated, the Federal Emergency Management Agency (FEMA) will provide individuals with actual federal claim forms.

On Tuesday, Governor Whitmer requested that President Biden declare a major disaster for the state of Michigan. Biden approved the disaster declaration on Thursday.

FEMA did not give an indication of exactly how long this process will take. FEMA joined city officials to do an initial assessment of the damage from flooding on July 8. That assessment aided the state in submitting a presidential disaster declaration, so that federal funding can arrive for individuals to help recover from flood damage.

Dearborn Public Information Director Mary Laundroche told The Arab American News on Tuesday that though the federal disaster agency promised to act very quickly once a declaration is issued, FEMA did not give a timeframe for when it will provide direct assistance to residents. With a disaster designation now approved, local officials have promised to update residents on next steps.

U.S. Rep. Debbie Dingell (D-Dearborn) said on Thursday that she was to meet with FEMA to better understand the relief assistance and support their communications efforts.

“In the coming days, we will ensure everyone in Michigan’s 12th District and beyond understands what to expect for relief assistance and how to obtain that assistance,” Dingell said.

Despite the term “claim forms” being used to describe the city’s damage reporting forms, Dearborn is not actually taking any claim forms, Laundroche told The Arab American News. The form on the website is to report flooding and estimated damage. It is not a form to claim specific damages.

Laundroche said the forms on the city’s website preserves people’s rights to compensation if in the future it is discovered that the city:

“In order to make sure people are not barred from collecting if any of these conditions are discovered in the future, they must fill out the form within 45 days of the event,” Laundroche said.

In addition, and importantly, the city government was asking residents to fill out the form to help with the data being collected to give to the county and state in support of the request for a presidential disaster declaration, which will bring FEMA to town with resources. The city wanted to document all the damage so the federal government would understand the huge amount of damage and personal losses suffered in the community, so they would be more likely to declare a disaster.

“That is the primary purpose of the city’s form,” Laundroche added. “FEMA will have their own forms, which will indeed be claim forms.”

Residents had said on social media that their submissions to the city were denied by clerks, even though they had filled out all documentations and had included numerous photos.

The city expects that what happened is some residents filed the original form that was on the city’s website on June 26-27. It was replaced on June 28 with a simpler form, and one that made clearer that photos and videos were not being accepted.

“We apologize that they filled out the first form,” Laundroche said. “It was a developing situation and the city was trying to protect people’s rights.”

The city decided upon reflection that the simpler form just asking for the flood report and estimated damage was determined to be the correct form. The latest information put out by the city this week is based on the simpler form, which is the correct form to file. Laundroche said the city was sorry for the inconvenience to residents who have already gone through so much.