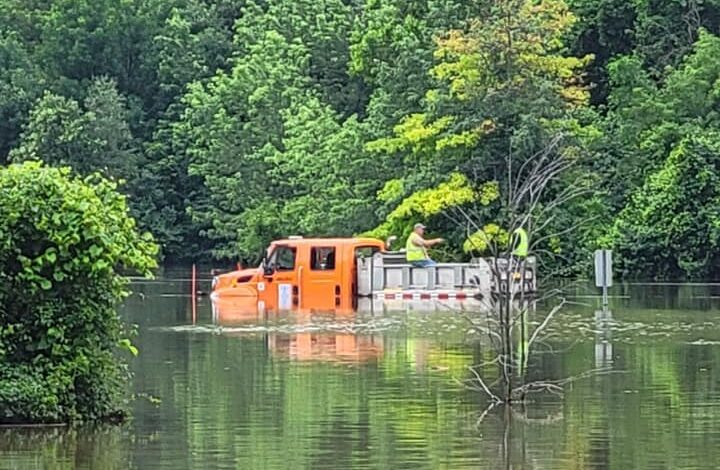 DEARBORN HEIGHTS — Near the end of an almost three-hour meeting, one City Councilman spoke up to change the rules a little bit.

Nearly two weeks after heavy rainfall devastated the city by causing flooding and sewer backup in many homes, Councilman Mo Baydoun said there is still debris sitting on curbsides.

“There is still debris in the city of Dearborn Heights throughout neighborhoods,” he said. “Is there a way that we can get somebody to start coming out, the way the city of Dearborn has, where we can get a second company aside from GFL to come out and help pick up the debris like Dearborn is doing? And if so, I’d love to give support to the administration to be able to go out there and get the debris picked up.”

Baydoun also said that he is embarrassed.

“It’s been what? Over 12 days now since the flooding happened and people’s debris is still outside of their home,” he said. “It’s still raining, it’s stinking, there’s maggots and people are calling and complaining and, honest to God, when I drive through neighborhoods, I’m embarrassed to see that debris still hasn’t been picked up.”

Councilman Ray Muscat put forward a motion to suspend the Council’s rules to allow Baydoun to make a motion for the trash collection.

It’s time we roll up our sleeves and get to work. — Councilman Mo Baydoun

The cap of $300,000 was made because the city currently pays GFL approximately $250,000 a month for routine garbage, recycling and yard waste collection.

Muscat supported Baydoun’s motion, which passed with a unanimous vote.

“I was in City Hall to pay my water bill and I was stopped nearly 10 times,” Baydoun told The Arab American News following the meeting. “We are all constantly getting messages over trash and debris collection. I have reached out to Emergency Manager Lee Gavin numerous times and he has been doing a phenomenal job. We didn’t have enough money approved for the administration to stretch their arms out for help.”

By the end of the meeting, Gavin, a former police chief who now serves as emergency management coordinator, had already secured the additional support.

“Since the Council approved us getting some vendors in, I’ve already made some contacts,” he said. “Starting tomorrow morning we will be having vendors to come collect debris and the area we are most concerned about is still the area east of Telegraph, so hopefully by the end of this week, we hope to have all of the debris collected.”

With residents’ frustrations mounting over the debris being left behind for nearly two weeks, Baydoun said enough is enough.

“It’s time we roll up our sleeves and get to work,” he said. “I have no agenda except doing what’s right for the residents. It’s not about being political, it’s about doing the work and helping our residents. It cannot happen anymore. We need to find a solution. This cannot be ignored.”

Baydoun said it’s important for residents to still keep their flood-damaged items at the curb and to not be alarmed if they see their neighbors’ items being collected first.

“If a resident has a lot more items than their neighbors, GFL did not forget about them,” he said. “GFL is taking more of the yards with smaller amounts of debris first so that they can clean up more and more quickly.”

Mayor Bill Bazzi confirmed to The Arab American News that the city has contracted two additional companies to help clear out the debris with GFL by the end of the week.