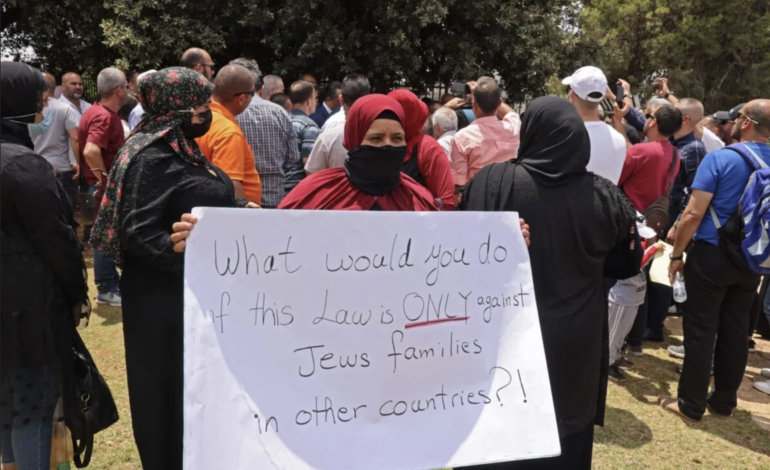 A woman holds up a sign against Israel's controversial Citizenship and Entry law, during a demonstration by Israeli Arabs ahead of a vote by the Knesset in Jerusalem on July 5. – Photo by AFP

When the Israeli Knesset (parliament) failed to renew what is commonly referred to as the Family Reunification Law, news reports and analyses misrepresented the story altogether. The even split of 59 MKs voting in favor of the law and 59 against it gave the erroneous impression that Israeli lawmakers are equally divided over the right of Palestinians to obtain permanent residency status or citizenship in Israel through marriage. Nothing could be further away from the truth.

The law was never made permanent as it was subjected to an annual vote, which successfully renewed it 17 times, consecutively. The 18th vote, on July 6, however, ran into an obstacle. Contrary to the perception given by media coverage, those who voted against the renewal of the ban did so for purely political reasons and not out of concern for the tens of thousands of Palestinian families that have splintered and broken up since the law came into effect.

Since the ousting of former Israeli Prime Minister Benjamin Netanyahu, at the hands of his protégé, current Prime Minister Naftali Bennett, Israel’s former leader has been determined to topple Bennett’s already fragile coalition. Bennett’s government allies cobble up extreme right-wing parties, including Yamina, the party of the prime minister himself, centrist and even leftist parties, the likes of Meretz. It even hosts an Arab party, United Arab List, or Ra’am, of Mansour Abbas. A coalition of this nature is unlikely to survive long, considering Israel’s tumultuous politics, and Netanyahu — eager for an early election — will do everything in his power to facilitate what he sees as an imminent collapse.

Netanyahu’s Likud party and its allies in the opposition voted against renewing the discriminatory law to score a political point. Their justification, however, was more appalling than the law itself. The Likud wants the temporary law to become a permanent fixture, a Basic Law, to be added to dozens of other similar racially-motivated laws that target the very fabric of Palestinian society.

Welcome to Israel’s demographic war on the Palestinian people. This one-sided war is situated in the belief among Israel’s Jewish majority that Israel’s greatest challenge is sustaining its demographic advantage which, thanks to a decided campaign of ethnic cleansing that began over seven decades ago, has been held by Jews over Palestinian Arabs.

Israel’s main fear is not simply a decisive Palestinian majority between the River Jordan and the Mediterranean Sea. Israel’s Jewish ruling classes are also rattled by the real possibility of the growing political influence of Israel’s Palestinian Arab constituency and are doing everything in their power to ensure Palestinian holders of Israeli citizenship are kept at a minimum. The Citizenship and Entry Law was designed specifically to keep this population in check.

The general elections of March 2020, in particular, provided a taste of what a doomsday scenario would look like.  Arab Israeli parties unified under the single ticket of the Joint List and emerged with 15 seats, making it the third-largest political bloc in the Israeli Knesset, after Likud and Blue and White. If Palestinian Arabs mastered this much influence, though they represent only 20 percent of the overall Israeli population, imagine what they could do if the demographic tide continues to shift in their favor. Palestinians waiting at the Qalandia Checkpoint

For Israel, the future of Jewish majority — read: supremacy — is dependent on keeping the population equation in favor of Israeli Jews at the expense of Palestinian Arabs. Most of the laws that discriminate against Palestinians, regardless of where they reside — in fact, anywhere in the world — is motivated by this maxim.

Palestinians elsewhere suffer an even worse fate. For example, Palestinians living in Jerusalem, who supposedly hold permanent residency status, are subjected to different types of legal harassment, so that Jerusalem can maintain its current Jewish majority. When Israel illegally occupied East Jerusalem in 1967, the city was almost entirely Palestinian Arab. Through numerous tactics, the city’s Arab population is now an ever-shrinking minority. Worse still, in 2018 Israel passed a law that granted the Ministry of Interior the right to revoke the residency of Jerusalemites based on the murky accusation of “breach of loyalty.”

The occupied West Bank and Gaza are confined, as only Israel determines who remains and who is permanently exiled. The Israeli military occupation of these regions has taken population control to a whole new level; it is almost an exact science.

This is also precisely why Israelis abhor the very discussion of the Right of Return for Palestinian refugees, for they consider it an implicit call for the “destruction of Israel as a Jewish state.” According to this logic, if millions of Palestinian refugees are allowed to return to their homes and lands in historic Palestine, Israel will no longer exist in its current form, as a Jewish state, but will become a democratic state for all of its citizens, instead.

What is likely to happen next is that Israel’s Interior Ministry will continue to find caveats in Israel’s ever-flexible laws to block the reunification of Palestinian families, until the Knesset officially renews the Citizenship and Entry Law or, worse, make it permanent. Either way, Israel’s demographic war on Palestinians is likely to intensify in the future. Considering that it is a war that cannot rationally be won, Israel is likely to delve deeper into the abyss of apartheid.

As Israel continues to experiment with controlling the Palestinian population, it would be shameful if the international community continued to remain silent. This moral outrage must end.