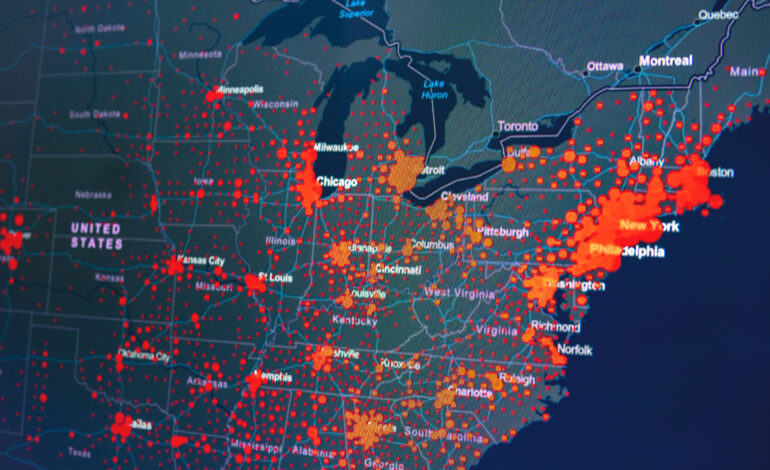 The U.S. is now seeing an uptick in COVID-19 cases, as the highly-contagious Delta variant driving infections among those unvaccinated across the country, especially in areas where vaccination rates remain relatively low.

Johns Hopkins University tallies show the average number of daily COVID cases in the U.S. has gone up 66 percent in just the last week, and is up 145 percent from two weeks ago.

Hospitalizations are also up, about 26 percent from last week.

Some 22 percent of the U.S. population lives in a county considered to have “high” COVID-19 transmission, according to data published Monday by the Centers for Disease Control and Prevention (CDC).

There are rare breakthrough cases of fully vaccinated people being infected by the Delta variant, although the risk of serious illness and hospitalization is drastically reduced for vaccinated individuals.

For example, Pfizer said its vaccine’s effectiveness against the variant after two doses is in the mid-eighties and is even more effective at preventing hospitalizations, doing so in at least 96 percent of cases. On Wednesday, a study published by the New England Journal of Medicine found that two doses of Pfizer’s shot was 88 percent effective at preventing symptomatic disease from the Delta variant.

Still, Pfizer is now looking for federal authorization for a third “booster shot” to maintain immunity as the virus mutates into more vaccine-resistant strains.

The rise in COVID-19 rates has prompted officials in states to consider actually pulling back on lifted mask mandates and public health restrictions.

Officials in at least three more states have either reinstated mask mandates, issued facial covering recommendations or threatened the return of strict public health limits, in defiance of federal health guidelines that say vaccinated people don’t have to follow those protocols in most settings, NBC said.

Less than half of the U.S. population is fully vaccinated, according to CDC data. Adding to the concern is the persistence of vaccine rejection among Americans. A poll published last Tuesday by Axios-Ipsos shows the majority of those who are not vaccinated are not at all likely to get vaccinated.

The poll, conducted between July 16 and July 19, said a quarter or less of those who are unvaccinated said that they would be likely to get the vaccine under certain circumstances. The poll used a nationally representative sample of 1,048 general population adults.

A University of Michigan survey released Thursday shows about half of adults living in Detroit are not yet fully vaccinated against COVID-19.

Among Detroiters who have not received any doses of the COVID-19 vaccine, nearly 8 out of 10 cited concerns about the safety of the vaccine among their reasons. A similar number of unvaccinated Detroiters, 78 percent, also reported that concerns about side effects were among the reasons they had not gotten vaccinated.

That survey showed 19 percent of Black Detroiters and 16 percent of Latino residents were more than twice as likely as White (6 percent) residents to report that they did not get a vaccine due to concerns about the effectiveness of the COVID-19 vaccine. Residents under 40 were also more likely than those between 40 and 64 to avoid getting the vaccine because they felt their risk of getting COVID-19 or getting seriously ill from COVID-19 is low.

One of the last things they do before they’re intubated is beg me for the vaccine. I hold their hand and tell them that I’m sorry, but it’s too late. — Dr. Brytney Cobia, Alabama hospital physician

In a Facebook post, Alabama hospital physician Dr. Brytney Cobia spoke of the severity of infections among the unvaccinated COVID-19 patient she receives and how young, healthy people are forced to change their minds about vaccines when it’s too late.

“I’m admitting young healthy people to the hospital with very serious COVID infections,” Cobia said. “One of the last things they do before they’re intubated is beg me for the vaccine. I hold their hand and tell them that I’m sorry, but it’s too late.

“A few days later when I call time of death, I hug their family members and I tell them the best way to honor their loved one is to go get vaccinated and encourage everyone they know to do the same. They cry. And they tell me they didn’t know. They thought it was a hoax.”

In Michigan, Henry Ford Hospital announced late last month that it was requiring its workforce to be fully vaccinated by Sept. 10 as a condition of employment.

The announcement did spark small peaceful protests over the new rules at Henry Ford hospitals, opposition that was not unexpected said hospital officials.

Henry Ford has seen a similar trend. At least 95 percent of patients being hospitalized for COVID-19 are unvaccinated. At Henry Ford Hospital, for example, not one patient who was fully vaccinated has been hospitalized in the ICU.

This virus continues to show that every single time we think we have it under control, it has a way to escape. — Dr. Adnan Munkarah, Henry Ford Hospitals

Currently, 28 patients are hospitalized with COVID-19 across the health system’s five acute-care hospitals. The positivity rate is 3.6 percent, which has been on the rise in recent days.

“This virus continues to show that every single time we think we have it under control, it has a way to escape,” said Dr. Adnan Munkarah, executive vice president and chief clinical officer, during a July 21 briefing. “The data has shown us that the best way out and the only way out (of the pandemic) is vaccination. The vaccination has allowed us to prevent people from being hospitalized.”

Munkarah said the median age of unvaccinated people being hospitalized are in their 30s and 40s. “This is not a virus that spares the young.” He said people who are immunocompromised are particularly vulnerable to loved ones and others who are unvaccinated.

“We have hundreds of children who have lost their life to COVID,” he added. “These are lives that could have been saved. Children at the present time don’t have the privilege of being vaccinated. We are exposing these young lives to the risk of COVID if we don’t vaccinate people.”

For those who have declined or delayed vaccination, Henry Ford officials cautioned people about misinformation and disinformation populating on social media and the Internet. Bob Riney, COO and president of healthcare operations, urged people to rely on trusted sources like their doctor, their faith leader or vaccinated loved ones and to seek information grounded in facts.

“We need everyone in this fight,” Riney said. “For vaccination to make a deep and lasting impact on the pandemic, we need our rates as high as they can possibly be. Safety and infection prevention are all of our responsibility.

Munkarah said getting vaccinated should not be a politician decision.

“The decision for vaccination is a medical decision,” he said. “It is not a political decision. It is not a freedom decision. This is all we ask for – that we take the discussion to where it needs to be for the health of our community.”