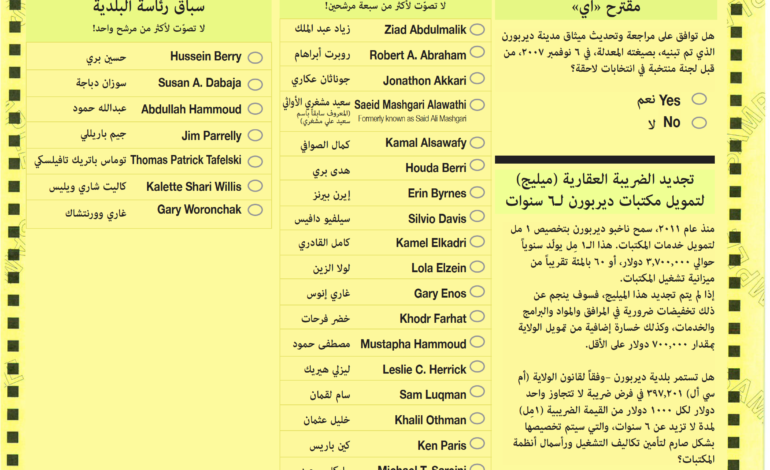 DEARBORN — With a packed ballot for the August 3 primary, Arab American advocates have been asking the city to offer translated voting material.

On the ballot for the primary election, residents will be narrowing the fields for mayor and City Council and will decide the outcome of proposals asking for a renewal of a six-year library millage and a review of the City Charter.

I want to make clear that accessibility to voting is provided to every registered voter regardless of what primary language they speak. — City Clerk George Darany

Following complaints from civil rights advocates, the city did add an absentee voter registration form in Arabic and a voter registration application in Arabic is available on its website. Also, a bilingual ballot will be available to guide Arabic speaking voters as they cast their votes in their designated precincts.

Abed Ayoub, legal and policy director for the American-Arab Anti-Discrimination Committee, said that while the city’s move is welcomed, it falls short of what is needed to ensure that Arab Americans have equal access to voting.

“With the largest concentration of Arab Americans, the city clerk should, on his own initiative, make sure that all voting information is available in Arabic, including on the web,” he said. “It’s skewing voter participation and it’s a method of voter suppression.”

Activists also said that the city still doesn’t have ballots in Arabic, Arabic-language options on its website to alert non-English speakers to the forms and there is no drop-box or satellite location in the eastern part of the city, which has a sizable number of Arab Americans.

On July 9, Ayoub sent a letter to City Clerk George Darany, saying that “several residents have expressed concern over the lack of voting information in Arabic available on the clerk’s office website. Particularly, the information about absentee ballots is all in English. Given the large Arab population in Dearborn it would be beneficial to have this information available.”

Darany responded on July 12, saying there’s not a great need for Arabic-language information.

In the email that had been obtained by the Detroit Free Press, Darany said, “my office has only recently been contacted by a few residents requesting that election materials be written in Arabic. … In my mind, this means that the need for Arabic election material is not widespread. If so, we certainly would have heard more about it with only three weeks left before the primary.”

Darany also said that many voters who only speak Arabic come to the clerk’s office to vote absentee and bring a relative with them to help with the translation, but that there are staff members who can help translate as well.

“I want to make clear that accessibility to voting is provided to every registered voter regardless of what primary language they speak,” the email read. “We are currently working on having sample ballots in Arabic available on the city of Dearborn website and at the polls on Election Day. Arabic-speaking poll workers are currently being assigned where needed. We also hope to have sample Absentee Ballot Applications in Arabic available soon. Also, a Voter Registration Form is currently available in Arabic on the city of Dearborn website.”

An application for an absentee voter ballot is available in Arabic at www.cityofdearborn.org/services/clerk/election-information.